Clint Eastwood is famous for saying “A man’s gotta know his limitations” but any woman will tell you that men never do.  I am one of those men and, sadly, sometimes I make a fool of myself because of it.  What men are pretty good at doing, however, is hiding the results or so we think, but sometimes it’s cathartic to expose the underbelly and today’s the day.  I’ll start with a story and end with really bad sketches.  I hope you can get a chuckle or two from it.

Tuesday morning I went for a physio treatment.  Right now, going anywhere is exhausting and physio visits even more so.  When I left there all I wanted to do was lie down but instead I went home, grabbed a sandwich, and then headed off to the second meeting of our still life group.  Arriving at the parking lot I realized that I had a “long walk” ahead of me.  It must have been a couple hundred feet to the door and then up a flight of stairs.  With my current hobbled gait, it only took me 10 minutes (grin).

When I got to the room I headed directly to a chair in the corner of the room and flopped into it as though I’d just completed the Boston Marathon.  I sat, looking across the room as everyone else was busy getting out art supplies, organizing their workspaces, and preparing to draw a large flower arrangement.  I just stared across the room.

Then it occurred to me that I was supposed to draw so I got out sketchbook and pen.  I couldn’t really see the flowers from where I was sitting but the thought of moving was unappealing so I started drawing people.  My sketch barely looks like people and my ability to “see like an artist” was lacking that day.  The result I share in the name of humor, not art. 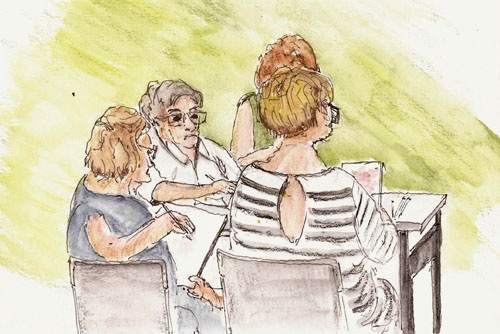 I don’t know how long this took me but I’d guess 10-15 minutes.  It seemed like hours.  When I finished I closed my book, closed my eyes, and started reflecting on what nonsense it was that I was there.  Though we’re slow on the uptake, even we men ‘get it’ sometimes.

But I was there to draw and so I didn’t succumb to rational thought.  Instead, I decided to draw a purse that was sitting on one of the tables.  Again, the sketchbook came out, the pen started scribbling, and this was created.  Another 10 minutes that felt like a couple hours. 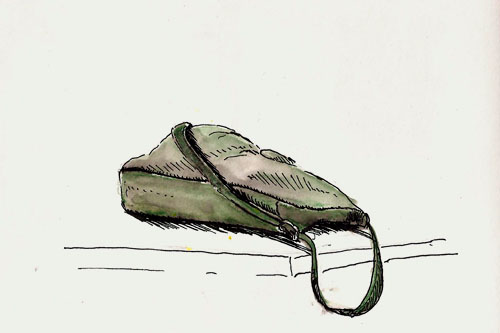 At this point I knew the session was near its end so I closed my book and put my pen away.  I looked at my watch.  I’d been there 25 minutes and there was 1 1/2 hours to go.  Not for me.  A man’s gotta know his limitations.  I went home.