The second annual PAX South took place this past weekend in San Antonio, TX and topped the inaugural showing with more to see and do, showcasing some of the newest games and advancements the industry had to offer. Among them was publisher Perfect World Entertainment with their new twin-stick shooter Livelock, which offers pinpoint shooting with a variety of customization and action.

Developed by Tuque Games, Livelock takes place on a desolate Earth in the distant future where only the consciousness of mankind lives on in robotic armor. Lead Game Designer Kevin Neibert took me on a guided tour of this post-apocalyptic world that has a surprising amount of personality despite the destruction of all living things.

“When the game starts it’s about 150 years in the future. There has been this mass extinction event on the Earth called ‘The Cataclysm,’ which wiped out all the plants, animals and people.” Said Neibert. “Right before it happened a bunch of powerful government organizations started this project called ‘The Human Contingency Project.’ Their goal was to upload human minds onto a database and download them into these large mechanical machine bodies to preserve humanity into the future, because everything else got completely destroyed.” 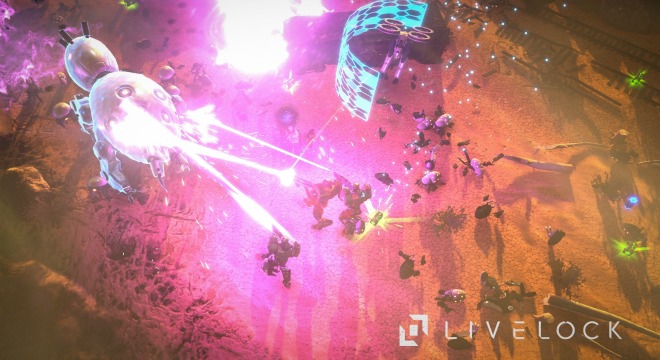 You view the world from a top-down perspective that lets you see all of the action simultaneously. Unlike in most twin-stick shooters, here you have the ability to hide behind cover and use the environment to your strategic advantage. You can lob projectiles over walls and shields and use special abilities known as functions for attacks or as passive abilities that can vary given the scenario.

“One thing that we really wanted to highlight in the game is player-enemy interaction,” said Neibert. “We wanted to show how intelligent our enemies are. You start to learn their behavior, strength and weaknesses and you try to exploit them as efficiently as possible.”

The action can get hot at times, with waves of different types of enemies approaching from all directions. Livelock at first glance appears to be overwhelming, but it never feels impossible. The level design is something that can be approached logically instead of mindless shooting at never-ending foes. Though the game can be played solo, it is definitely built to be experienced with other players. Up to three people can join forces to blast their way through hordes of enemies trying to reclaim the Earth.

When the game is released you will have your choice of three different protagonists that have different styles of play and personalities, with the ability to customize your character using a plethora of weapons and functions. Even when playing the same class a group can fill every niche.

“Hex is our trash-talking, high-mobility marksmen character,” said Neibert. “The guy [Hex] plays very hit and run. I have a function called flash that lets you dash and phases through enemies. I can use it to engage or if I’m in trouble I can use it to escape. Your character was a human before, so you still have your human emotions. You still have your personality, but you’re in this mechanical killing machine.”

The most unexpected thing about Livelock is the amount of personality and attention to detail present in a genre where there is usually none. Outside of Hex delivering humorous (yet repetitive) one-liners, there is a considerable amount of attention to detail. Enemies appear vibrant and distinct enough where they don’t get lost in the environment, while different functions each give off unique flair that add to the game's overall visual aesthetic. 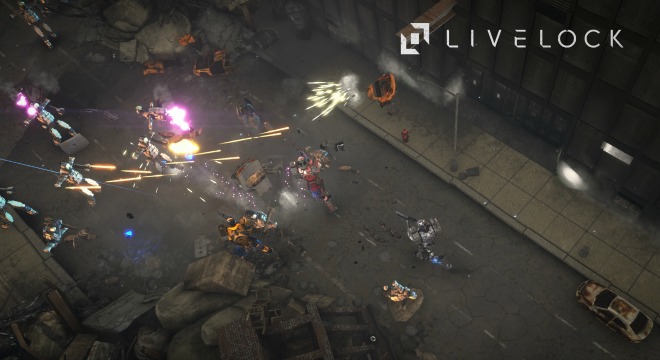 Livelock will feature a full campaign that takes place over three story arcs where you can find out what really happened before, during and after ‘The Cataclysm.’ Outside of the story there will be other modes like Endless Wave, where you are put up against waves of never-ending enemies on randomly loaded environments and scenarios.

You can expect to hear more from Tuque Games in the coming months, with character reveals and some other surprises in the plans. Projected to release later this year for Xbox One Livelock is shaping up to be a solid pick for fans of accurate shooting and nonstop action.

The post Traversing the world of Livelock appeared first on XBLAFans.