MMOs feel too much like a second job to me. They’re spreadsheets that you play at your PC, which is where I sit down to work all day. I don’t like the idea of stabbing 20 wolves to get +1 of some stat I don’t give a crap about.

I’ve tried TESO, FF14, and even World of Warcraft, but I always bounce off them a dozen hours in. On Monday, I subscribed to an MMO, mainly because it doesn’t feel like one. Star Wars: The Old Republic feels like a proper BioWare RPG.

Where MMOs usually fall down for me is in the fact I don’t give a solitary shit what they’re asking me to do. Go to this area and kill ten of these things. Come back. Get some XP and maybe an item. Do it again. I . Don’t. Care. Dialogue in MMOs exists to be skipped. I haven’t skipped a single line in SWTOR. 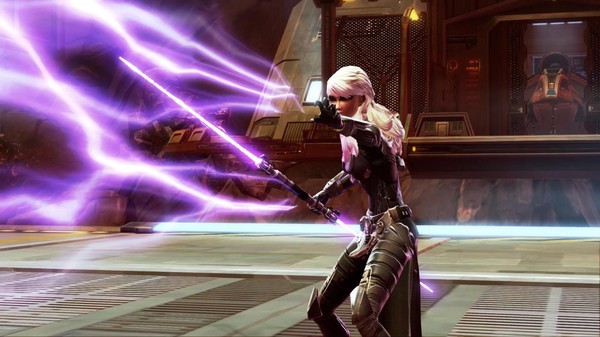 Before you attack me, I know FF14 apparently gets really, really good when you get to the expansions. I just don’t have the time to wait for a game to get good. I’m having a very busy 2020 doomscrolling through Twitter and ignoring the half-finished novel (Blood Meridian) on my bedside table. SWTOR grabbed me almost immediately.

It gives you personal stakes off the bat. The story doesn’t kick off with world-ending calamities (we get enough of that in real life, am I right?), instead focusing on your character – in my case, a Sith Inquisitor and former slave who’s trying to claw his way up the ladder of power on the dark side of the Force.

Within the first couple of hours I have a rival and I understand my place in the world. I know my goals – to become a Sith – and it’s clear how I need to achieve those goals. Once I’m done, there are seven other class stories – each a full campaign with its own tale to tell – waiting for me. 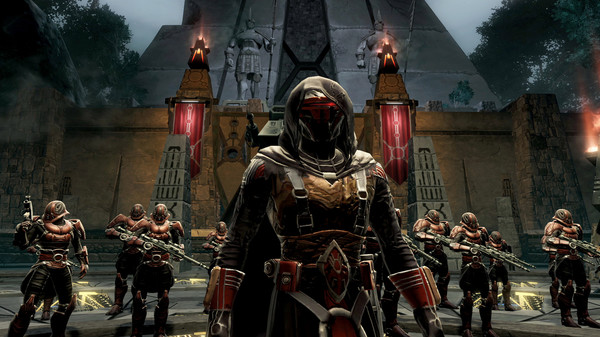 You can be anything from a Jedi Knight to a Bounty Hunter or an Imperial Agent – the latter of which is apparently a James Bond-esque story that has you taking out a powerful Sith Lord with cunning and subterfuge. Everyone who’s played further along tells me that “things really get going once you hit the expansions”. One of them is apparently the closest we’ll get to Knights of the Old Republic 3. I’m sitting here in my personal starship, with an entire galaxy to explore, and I’m wondering how it gets better than it already is.

It’s an MMO that you can play completely solo. You have companions who join you and chat to you between missions, much like BioWare’s single-player RPGs. You can shag some of them, obviously. There’s choice and consequence, you shape the world around you, and you can decide your own moral code. It’s one of those games that gets it claws in you and makes you think about it when you’re doing anything else. It’s even stopped me doomscrolling. 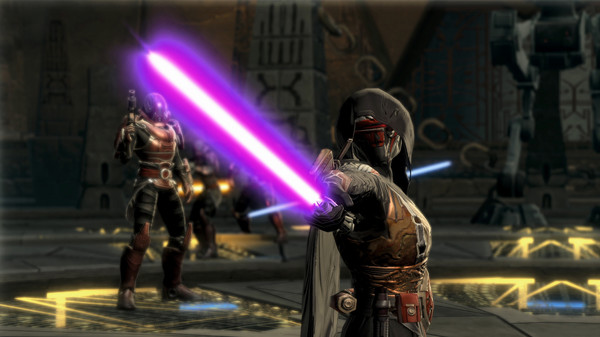 The value is also ridiculous. SWTOR just went free-to-play and you can experience every single class story to completion, for free. Your inventory is restricted and there’s a cap on how many credits you can earn in-game, but the core experience is all there. If you do decide you want access to the expansions, you only have to subscribe for a month and most of the extras stay unlocked forever, even if you end your sub once the month is up.

Another thing I really appreciate is the lack of grinding. I’ve basically mainlined the main quests and ignored much of the filler, yet I’m still five levels above where I need to be for my current point in the story. If there’s one thing I can’t stand about MMOs, it’s the grind, and SWTOR doesn’t have any so far. It also has another advantage over the usual MMOs: lightsabers. 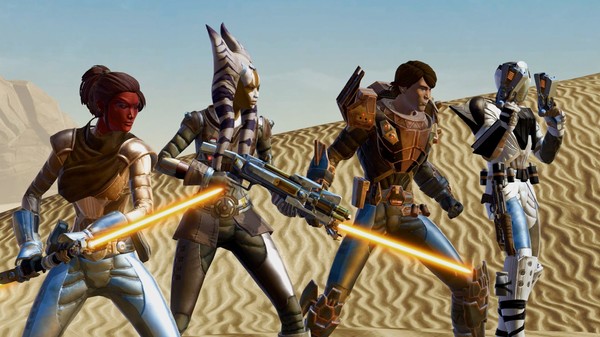 If, like me, you are invested in the Knights of the Old Republic games, there’s even some extra lore for you to dig into. I’ve already met a cult who worship Darth Revan – the (spoilers) protagonist of the first game – and I’m told there’s more Revan stuff to come. Other MMOs are too impersonal. You are the chosen one, in a world full of chosen ones. SWTOR puts the focus squarely on you and (so far) doesn’t tell you the fate of the entire galaxy is in your hands.

Take the introductory quests for the Sith Inquisitor. You start on a Sith-controlled planet and you’re attempting to become a dark lord’s apprentice. As a former slave, the man who’s training you hates your guts. He instead favours one of your rivals; a robed, Darth Maul-esque acolyte with a promising future, who also hates you. It lets you focus on this dynamic, which makes you care about why you’re doing the things you do.

It’s BioWare applying the learnings of its single-player stories to the MMO genre and it works incredibly well if you prefer those kinds of RPGs to the ones where you’re asked repeatedly to kill 100 rats. For players who do like that kind of thing, you can grind heroic quests and repeat the Flashpoints (big dungeons) until your pea brain is content. Try it out for free and you won’t be disappointed.