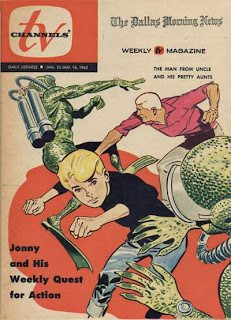 You wouldn’t think anyone would mistake TV’s first action-adventure cartoon with a show that had human mouths superimposed over inanimate drawings. But someone did.

“Jonny Quest” had problems from the beginning. Variety announced on December 25, 1963 that Screen Gems sales boss John Mitchell negotiated a 26-week deal with ABC for the show, which was described as “a candidate for the Friday night 7:30 period next season (following the departure of the current tenant, ‘77 Sunset Strip’). Series has been bought at $60,000 per copy off the story board as a firm commitment.”

But now ABC had to sell it. Variety reported on January 29, 1964: “With General Mills, which was offered first opportunity to sponsor the series, having turned it down, ABC is looking for other prospects.” ABC had sales problems in general; the April 29th Weekly Variety revealed the network had six shows with no advertising and one with a minute. That was “Jonny Quest.”

Today, fans know that Wildey was the show’s creator. In 1964, all we knew was he was the “Supervising Art Director” in the end credits (with a box around his name, like Milt Caniff). Wildey come from Cambria Studios which produced the least-animated cartoons in history. Double-exposed live-action mouths moved when characters didn’t. And Cambria wasn’t too happy with what it saw in “Jonny Quest.” It called in the corporate lawyers.

$1,050,000 Piracy Suit Filed Against ‘Jonny Quest’
Cambria Studios Inc. has bright legal action in Superior Court over the Hanna-Barbara tv series, “Jonny Quest,” in which damages totalling $1,050,000 were asked. Named as co-defendants with H-B were Screen Gems and ABC, on charges of plagiarism, misappropriation of trade secrets, inducing breach of contract and false advertising. 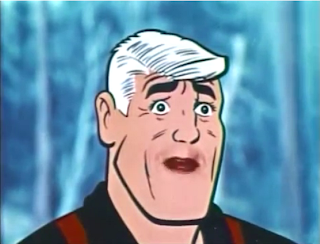 Complaint filed by attorney Irwin O. Spiegel alleged that the “Jonny Quest” series uses, copies and appropriates substantial parts and portions of Cambria's “Clutch Cargo” and its pilot film, “Captain Fathom,” including their principal cartoon characters. Defendants, according to complaint, misappropriated Cambria's new, original techniques and know- how in the use of illustration or comic strip art in production of animated films, and that Hanna-Barbera induced former Cambria employes to reveal this confidential information in breach of employment contracts.
Suit also asked for an injunction to prevent further dissemination of allegedly false and misleading statements that Hanna-Barbera are the originators of the use of comic strip art in the animated cartoon medium

Wildey wasn’t the only ex-Cambria employee to move over to Hanna-Barbera. Alex Toth and Warren Tufts joined him and the two worked on a number of series in the ‘60s.

There’s no word in Variety how the suit ended, but it didn’t affect Jonny Quest’s future in the slightest. The show didn’t have one, not in prime time anyway. Not enough people were watching. Jonny, Race and Bandit won their time slot in their series debut, but were last in the Arbitron ratings the following week behind “Rawhide” (CBS) and the memorable “International Showtime” (NBC). Things were even worse for “The Flintstones,” which was getting hammered by “The Munsters” (CBS) with more than three times the audience on the season opener. So a decision was made; Variety reported on December 14th that ABC was switching the the two half-hour cartoons on its schedule. Jonny was sacrificed for Fred and Barney. “The Flintstones” remained on the air next season. “Jonny Quest” was cancelled by mid-March. Incidentally, it was one of only seven night-time shows ABC broadcast in colour, though Variety questioned (February 24th, 1965) whether many stations aired it that way.

But, if I may be allowed an opinion, Jonny was a good show. Fred Silverman at CBS evidently thought so, too, as he bought the rerun rights and put it on the Saturday morning schedule on September 9, 1967. And there it flourished. It later begat “New Adventures” and “Real Adventures,” neither of which resulted in lawsuits by Cambria.

Incidentally, Hanna-Barbera was already in court at the time the Cambria suit was filed, as a trial was getting under way over damages to Morey Amsterdam and Pat Carroll for being let go as the voices of George and Jane Jetson. And the studio had met up once before with Cambria’s legal representative, Irwin O. Spiegel, in another lawsuit over a half-hour prime-time show. We’ll try to get to that in a future post.
yowpyowp jonny quest
Latest Posts