In this article we will have a look at various approaches on how to create snapshot tables with varying degrees of flexibility. We will start by taking a brief look at the classic Kimball approaches, then discuss a different approach for a Big Data environment and finally take a look at an alternative approach which I came up with. This article is more of a theoretical nature - initially I tried to include some practical examples, but the article was just getting way too long, so I cut it back to the essential points.

Both the snapshot as well as the accumulating snapshot rely on a fact table. You can think of them as alternative views on the same data, which allow to answer a different set of questions.

A snapshot allows us to easily check at which stage a certain item is on a given day: A classic example is an item being delivered from your online merchant to your doorstep. It's a predefined process with given steps. A classic Kimball style snapshot would list the ID of your order, any dimensions, a date or timestamp for each of the steps (e.g. Package ready to be dispatched, Arrived at local distribution centre etc) and there would be a counter of 1 for each of the steps completed. The table row gets updated as the delivery progresses. This works fine for processes that are more of a static nature.

Here an extremely simplified example: The object with id 20 just entered step 1 in our process, hence we insert a new record populating the respective fields:

Two days later when the objects enters step 2 of our process we have to update the snapshot table with the timestamp and count:

Important: Dimensional values which were originally inserted for one particular record never get updated! So the value of dim_a in the above example must not change at any point. The same principles as for the standard fact table apply: No data gets overwritten at any point. It's a write once process (In the case of the snapshot on a cell level).

If the process is of a more flexible nature, e.g. it's possible to jump one or several steps back and forward (even several times), then pursuing the Kimball style snapshot approach might be quite a challenge/impossible.

The quantity on hand is usually measured at the end of the day.

Accumulating Snapshot saves reporting solutions the computing intensive task of having to calculate for each day how many objects entered and exited a certain stage/step since the very beginning.

The ETL process has less to do as well to create a new record: We only have to look at the previous day's accumulative quantity and then add all the new objects entering the step/stage and subtract all the objects leaving this step/stage. So it is a fairly easy calculation as well.

On a recent project the task was to store any event in a workflow on Hadoop. As most of you will know, Hadoop HDFS was not originally designed for updates, hence we had to resort to an alternative strategy - which was suggested by Nelson Sousa: The idea is to negate the last event once a new event arrives. The original event has a count of 1 whereas the negating/closing record of the same event has a count of -1. When you sum the records, the result will be 0.

Another requirement was that we can record any event: The workflow is not necessarily sequential. Items can jump back and forth several steps several times. This means that Kimball's accumulating snapshot approach cannot be applied.

The basic algorithm will create a closing record for each event once a new one arrives. The closing record's date will be the same as the one of the next event:

A second ETL process creates the accumulating snapshot, which we will discuss next.

In order to be able to analyse the amount of items in a certain state on a given day, we have to create an accumulating snapshot table. The setup is similar to the one of bank statement: There is a balance and the difference to the previous balance is shown (in form of transactions). Hence there is no need to recalculate everything since the opening of bank account.

Filling the gaps: The important point to consider is that for a daily snapshot we have to create daily records even if there is no measure available for this particular day and the given combination of dimensions. The fillings are highlighted in the below screenshot in blue: 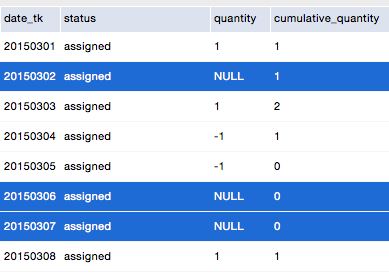 A more sensible approach is to not create fillers once the cumulative sum of a given combination of dimensions reaches zero - this will safe you some disk space.

A simple strategy to create these fillings in the ETL is to calculate the difference in amount of days between the current record and the next record and subtract minus 1. Then you can use this number to clone the current record. Care must be taken to set any measures to NULL in the clones (apart from the cumulative measures).

Writing the Mondrian OLAP Schema for the snapshot and accumulating snapshot tables is quite straight forward. The one noteworthy point is that we should create a derived dimension called Flow (based on our +1 and -1 counts) in order to better show the in and out movement. Another important point is that the end users have to be educated to only analyse accumulating snapshot figures on a daily level, as they will not roll up to a higher level (unless you fancy implementing semi-additive measures, which automatically picks the beginning of the month e.g. if you are on a monthly level - this can be quite performance intensive though).

A very simple report will show the amount of issues added and removed from a certain status on a given day:

The next report is a bit similar, but we set following filters: 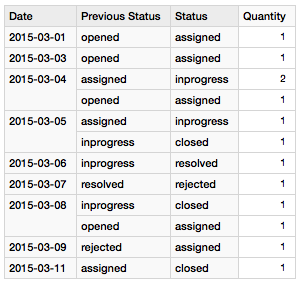 Our sample dataset is extremely small, but in real world scenarios you can take the output of the above query for just one day and display it in a Sankey or Alluvial Diagram. Here is an example based around our use case, just with a bit more data: 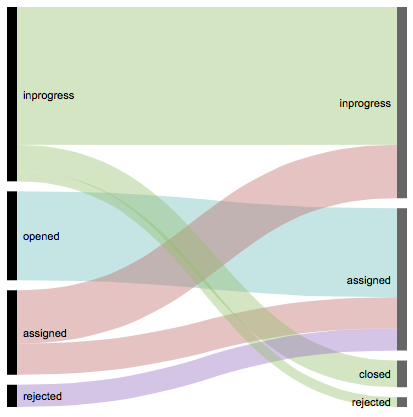 The above diagram was quickly created with RAW - a good way to prototype this type of chart. You can later on implement this kind of chart in a Pentaho CDE dashboard.

And finally we want to understand how many items there are each day in a given status, which can be answered by our Accumulating Snapshot cube:

2015-03-01 shows 0 items as in Status opened. The reason for this is that the snapshot represents the state at the end of the day: One item was opened on 2015-03-01 and assigned on the same day, hence our snapshot shows 0 for opened and 1 for assigned.

Basic Strategy - Processing One Day at a time 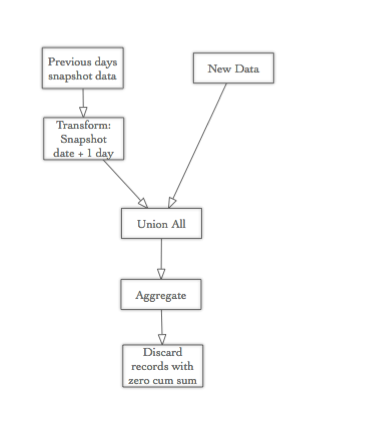 The approach below assumes that you do not have any late arriving data.

This is only a very rough outline, there are many more steps required to make this work properly. 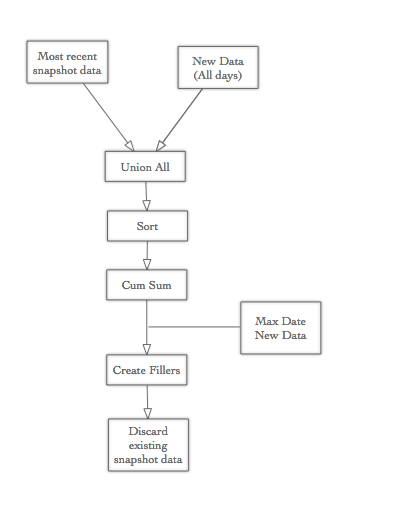 Why do we need the max date of the new data? Because we have to create filler records for any combination of dimensions until this date in case there is no measure for them available. E.g. we might have measures for category X until the most recent date but for category Y we might only have data until 2 days earlier. So even though no changes happened for category Y, we still have to create records for it (in the ideal case only if the cumulative sum is not zero).

It is worth noting that if there is a certain category (combination of dims) in the existing snapshot data but no corresponding new data, we have to keep on creating records for them in the snapshot table for each day (create clones). But this is quite often an overkill, as I don't consider it necessary to show records when there is a cumulative sum of 0.

For all categories (combinations of dims) that we create clones for for each day, the cumulative sum will be the same and the standard sum/quantity has to be set to 0.

In a nutshell: If there are no new measures for a given day, a snapshot table still has to show a record (if that combination of dims showed up in the past).

The example above (shown in the screenshot) illustrates some of the considerations we have to take:

In the case of Hadoop, we cannot just update existing records in case we have late arriving data (and usually it is not a good idea to update records in a any case unless it is a snapshot). 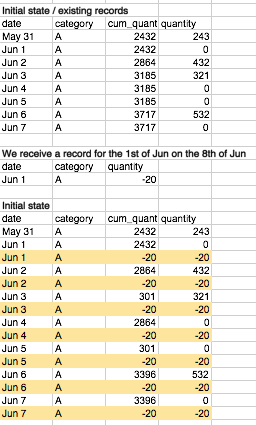 In the example shown above, we receive a record on the 8th of June for the 1st of Jun. Snapshot data is already available until the 7th of Jun. As we cannot update the existing records, we just insert new records (highlighted in yellow) for evert day since the 1st of Jun to correct the existing records. This approach was suggested by Nelson Sousa.

It is worth noting that the Mondrian Cube Definition should easily handle this scenario without requiring any changes, however, the ETL might need some adjustment (e.g. when accumulating snapshot figures get sourced, they have to get aggregated).

The previously discussed approach was quite difficult to implement - difficult mainly because we had to show the age of a given item in working days (in a given state/event on a given day).

Here is an alternative approach I came up with, which is good for a quick prototype. I wouldn't use it for production as it generates way too much data - unless you are not worried about this.

Outline of the Strategy

You will notice that we keep on creating negating records and the pairs have +1 and -1 counters (quantity_moving). The difference to the other approaches is that the ETL creates fillers for the days in between the entering and exit record. Noteable addition is the quantity_on_hand field, which is set to 1 for every day we actually have this object in the given state/event (you guessed it). Now just put a Mondrian Schema on top, et voilá: you have everything! Mondrian will sum up the quantity_on_hand for a given day, which will give you the accumulative snapshot figures and at the same time you also have access to figures about items entering and exiting a given status (quantity_moving).

Also notice, that for this a particular issue_id we had a raw record for 2015-06-06 and 2015-06-15, but nothing thereafter. There were other records in the source data available last time we imported, so we had to take the maximum date from the source data and generate rows for this issue up to that date. This will make sure that quantity_on_hand figures are correct for all dates.

Drawbacks of the strategy: