By Jodi Brignola and Genevieve Casagrande
Key Takeaway: The Russian air campaign enabled additional battlefield gains by the Syrian regime from January 8 to January 14, providing increased leverage to the regime ahead of negotiations between pro- and anti-Assad elements on January 25. Pro-regime forces seized the town of Salma in Northeastern Latakia Province with the support of as many as 200 Russian airstrikes on January 12. Salma has been consistently targeted by Russian airstrikes over the past three months, which began hitting the town as early as October 6. The seizure of Salma will enable further clearing operations against the armed opposition in Northeastern Latakia as pro-regime forces continue efforts to buffer the regime’s coastal stronghold. Pro-regime forces will likely take additional measures to degrade the capability of the armed opposition ahead of negotiations by intensifying advances on core opposition-held terrain in Idlib, Northern Homs, and Damascus, in addition to expanding and securing regime strongholds. The regime tightened its siege on the opposition-held pocket in Northern Homs Province on January 12, seizing the village of Jarjisah northwest of Rastan amidst heavy Russian airstrikes on opposition positions in the area. The seizure of Jarjisah reportedly severed the last opposition supply route into the area, completing the besiegement of roughly 250,000 civilians that currently reside there.
Russia released the text of the August 26 agreement between Russian and Syrian officials that transferred control of the Bassel al-Assad airbase to Russia. The released text indicates that the agreement transferred control of Bassel al-Assad airportindefinitely and can only be officially terminated one year after a written request is submitted by either party. Russia’s publication of the text of this agreement clearly signals its intent to maintain military presence in Syria over the medium term regardless of the outcome of the January 25. The Russian Ministry of Defense (MoD) also published footage of Russian and Syrian warplanes carrying out their first joint mission over Syria on January 14, a clear show of force for the Syrian opposition. The joint mission also demonstrates growing coordinative capabilities between the Syrian and Russian air forces, likely signaling deepened cooperation to come.
The following graphic depicts ISW’s assessment of Russian airstrike locations based on reports from local Syrian activist networks, Syrian state-run media, and statements by Russian and Western officials. This map represents locations targeted by Russia’s air campaign, rather than the number of individual strikes or sorties.
High-Confidence reporting. ISW places high confidence in reports corroborated both by official government statements reported through credible channels and documentation from rebel factions or activist networks on the ground in Syria deemed to be credible.
Low-Confidence reporting. ISW places low confidence in secondary sources that have not been confirmed or sources deemed likely to contain disinformation. 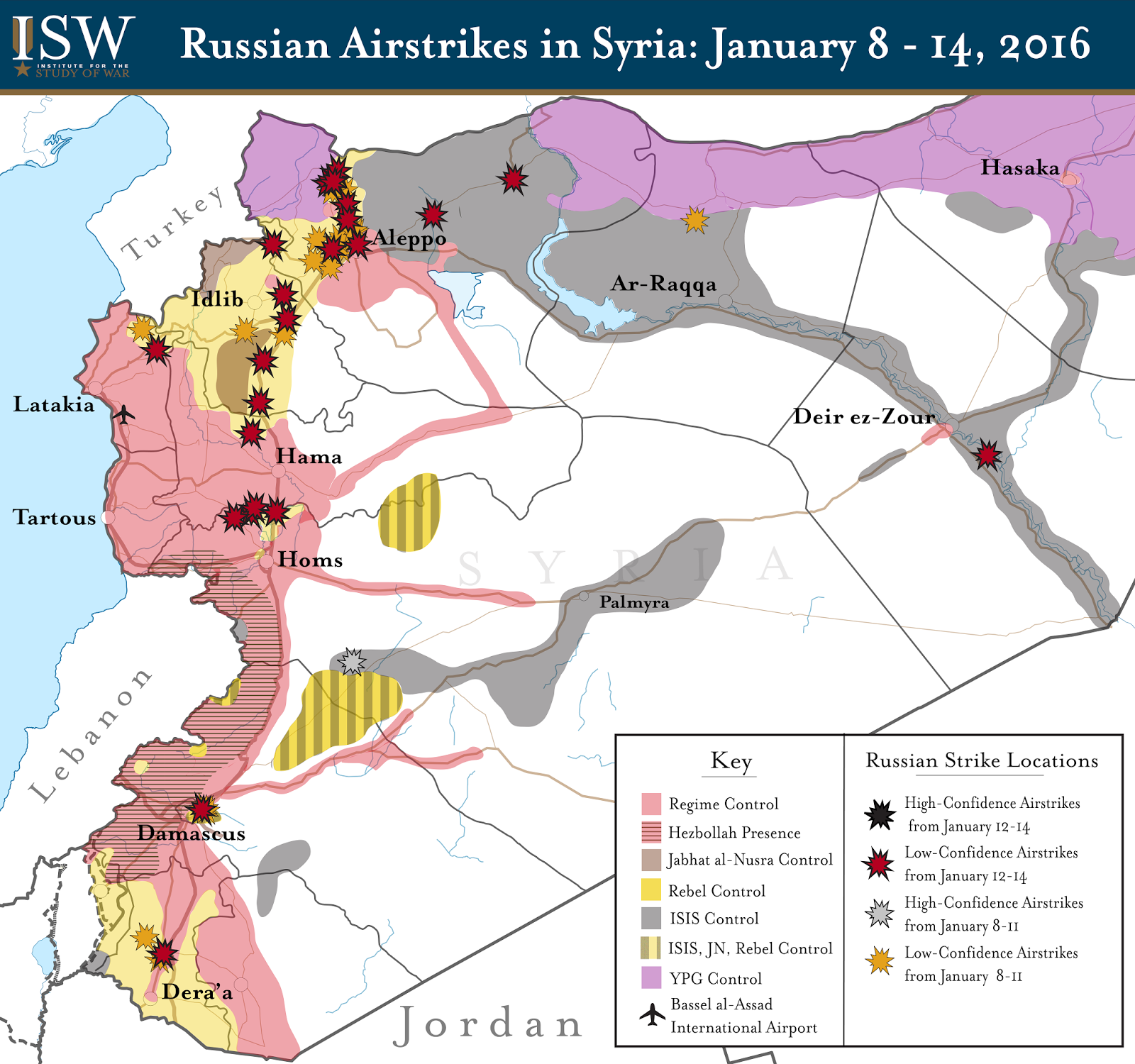