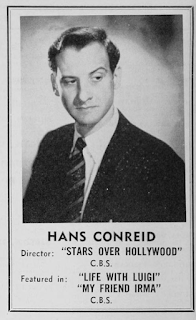 Hans Conried was articulate, sophisticated and, like other actors who catch the fancy of the public, very employed at one time.

Conried once told host/historian Chuck Schaden he began his radio career doing Shakespeare on KECA in Los Angeles. And while the Hollywood Reporter of June 26, 1937 reveals he had been cast in the second show of the Shakespearean series (“Richard III”), the same paper of February 24, 1937 reveals his employ in a comedy-satire on the “Hollywood Theatre” programme on KHJ. And his career carried on from there (even though he has no occupation in the 1940 U.S. Census).

Somewhere in this blog (I’m pretty sure I posted it), Conried gave Mel Blanc credit for getting him to radio comedy after the war, as he played the head of Zebra Lodge when Blanc had his own show on CBS for a season.

Television didn’t stop Conried’s career when radio died (for him, in 1953, he told Schaden). He was making semi-regular appearances on several shows. He talks about two of them in the article below, published April 11, 1958. The “tattoo” show was on the Target anthology series and aired on November 24. The same night you could see him on Danny Thomas. And as you can see by the newspaper ad, he was in the cast of a music film that year.

Conried Fears TV Overexposure
By HAROLD STERN
"I don't know anything about Dody Goodman! I don't want to know anything about Dody Goodman! But everywhere I go, people buttonhole me, begging for inside information!"
Hans Conried looked at me despairingly. "All I want," he said, "is for Jack Paar's office to keep calling me to ask when I'll be available again. I'm not at all controversial. I'm everybody's friend." 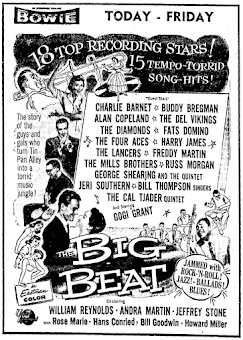 Hans, who may currently be seen on almost every television show on all three networks, is now preparing for his next major T. V. appearance, that of the witch in Yasha Frank's April 27 N. B. C. production of "Hansel and Gretel". Whatever you may think of the merits of doing "Hansel and Gretel" on T. V. and whatever your opinion of Hans Connects talents, you’ll have to admit this is pretty exotic casting.
"It's been over a year since I've had a week off," Hans Conried admitted, "and though you say you see me everywhere now, that can rebound: People may say: 'Oh, Conried's all right, but who wants him again?' "
At the moment, that thought hasn't entered any one's mind. In recent weeks Hans has been on the Jack Paar Show, Omnibus, the Red Skelton show, the Danny Thomas Show as an old Shakespearean actor, Maverick, plus several films completed but not as yet released.
He'll continue to reappear on the Danny Thomas Show as Uncle Tonoose and will occasionally play other roles as well. His success on that series almost frightens him.
"Because of my appearance as Uncle Tonoose," he told me, "I have acquired a whole new following of Syrians and Armenians. Now, when I make public appearances," he added incredulously, "they expect me to make speeches in Arabic. I don't speak Arabic!"
Also coming up is a Telephone Hour Science Show in which he plays the heavy, the Mad Hatter, in "The Alphabet Conspiracy", an investigation into linguistics (he won’t have to speak Arabic here).
"I have an excellent film coming out soon," Hans exclaimed. "In it I play an international dope pusher, posing as a tattoo artist, who gets pinned against a wall by a fork lift. It's the kind of action I do well. Unfortunately, I don't remember the title or the series, but you "can't miss it."
Getting back to "Hansel and Gretel", I asked Hans if he had any thoughts on what seemed to be a trend of fairy tales to T. V.
"Well, why shouldn't there be?" he answered. "Here the industry is barely 10 years old and we've written ourselves out. There isn't enough talent in the world to feed this medium. And, if you're fond of horror stories, think of what television will be like in 30 years!"

Conried didn’t have many starring vehicles. Two were in feature films released in 1953—The 5,000 Fingers of Dr. T and The Twonky, both too odd to generate huge box office response. He shot a Mr. Belvedere pilot film in 1959 but none of the TV networks picked it up. He may have been relieved. He told columnist Erskine Johnson “I'm not sure I want a show of my own. I'm the happiest when I'm doing something different every week.” Oddly, he found most of his work after the 1950s (Jay Ward Productions notwithstanding) on the stage where you’re doing the same thing every night. And he toured college campuses.

The story mentioned The Alphabet Conspiracy, a fantasy/educational film “Produced under the personal supervision of Jack L. Warner.” A beat-up copy that’s been on the internet for ages (surely, someone must have restored this) is posted below. Hans Conried gets a credit, but there’s no music credit. That’s because the music was supplied by the Capitol Hi-Q library. The opening theme is by Bill Loose, but I haven’t found it in my ‘M’ series collection. At 2:56, you’ll recognise cues by Spencer Moore if you know your Gumby or Huckleberry Hound music before Conried’s entrance.