Triumph's two special editions of its best-selling Bonneville—announced several months ago—are now available for purchase. The Bonneville T120 Ace and Diamond editions celebrate the iconic Bonneville and the history that has made it so successful, and you can scoop one up now.

The two bikes vary on the surface only, with both riding on the well-developed Bonneville T120 platform which brings iconic styling riffing on the 1959 original, a 1,200cc High Torque twin Bonneville engine and a dedicated chassis and suspension setup. 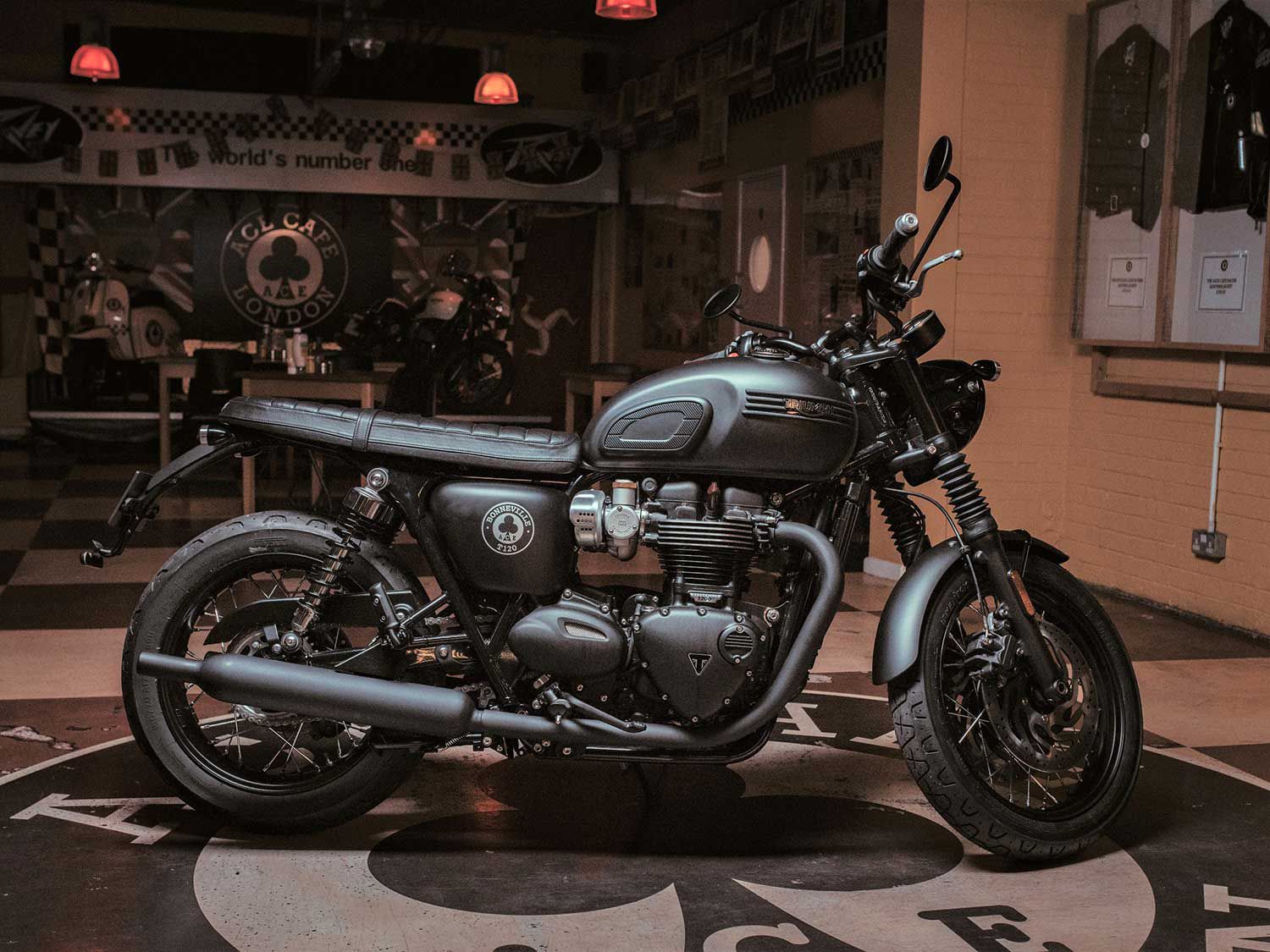 The limited-edition blacked-out T120 Ace model is the result of a partnership between London’s Ace Café and Triumph. Production is limited to 1,400 units. (Triumph Motorcycles/)

The 2019 Bonneville T120 Ace is a collaboration with the iconic Ace Café in London. The very spot that was the “café” that cafe racers were named after has partnered up with Triumph before on the successful Thruxton Ace in 2015, and now returns with a darker edge on the blacked-out T120. 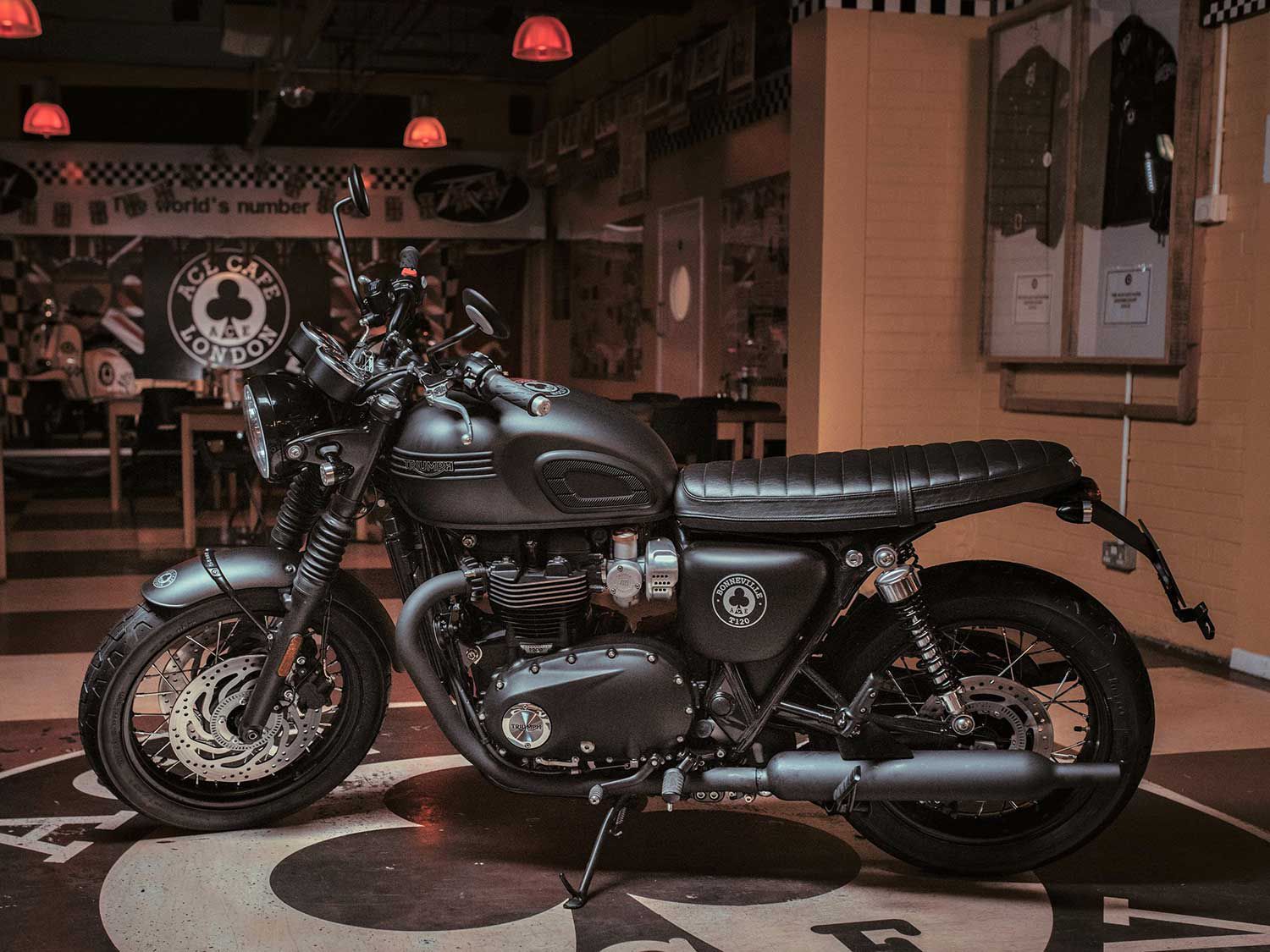 The 2019 Bonneville T120 Ace is a collaboration with the iconic Ace Café in London. The very spot that was the “café” that cafe racers were named after has partnered up with Triumph before on the successful Thruxton Ace in 2015, and now returns with a darker edge on the blacked-out T120. (Triumph Motorcycles/)

The one-off limited-edition model gets a slew of unique details and features, most of them cosmetic. It’s a blacked-out urban “traffic light racer” themed special, with unique matt Storm Grey with a contrasting stripe Ace Café paint scheme, dedicated Ace Café and Bonneville T120 graphics (including a “Head down—Hold on” tank graphic), and black Triumph tank and engine badging. A black tuck-’n’-roll seat, the archetypal ace of clubs logo, and a fender removal kit as standard equipment make the T120 Ace stand out from your base-model Bonnies. The special edition will be limited to 1,400 units worldwide, and each bike comes with a numbered certificate signed by Triumph CEO Nick Bloor and Ace Café founder Mark Wilsmore. Pricing is $12,500. 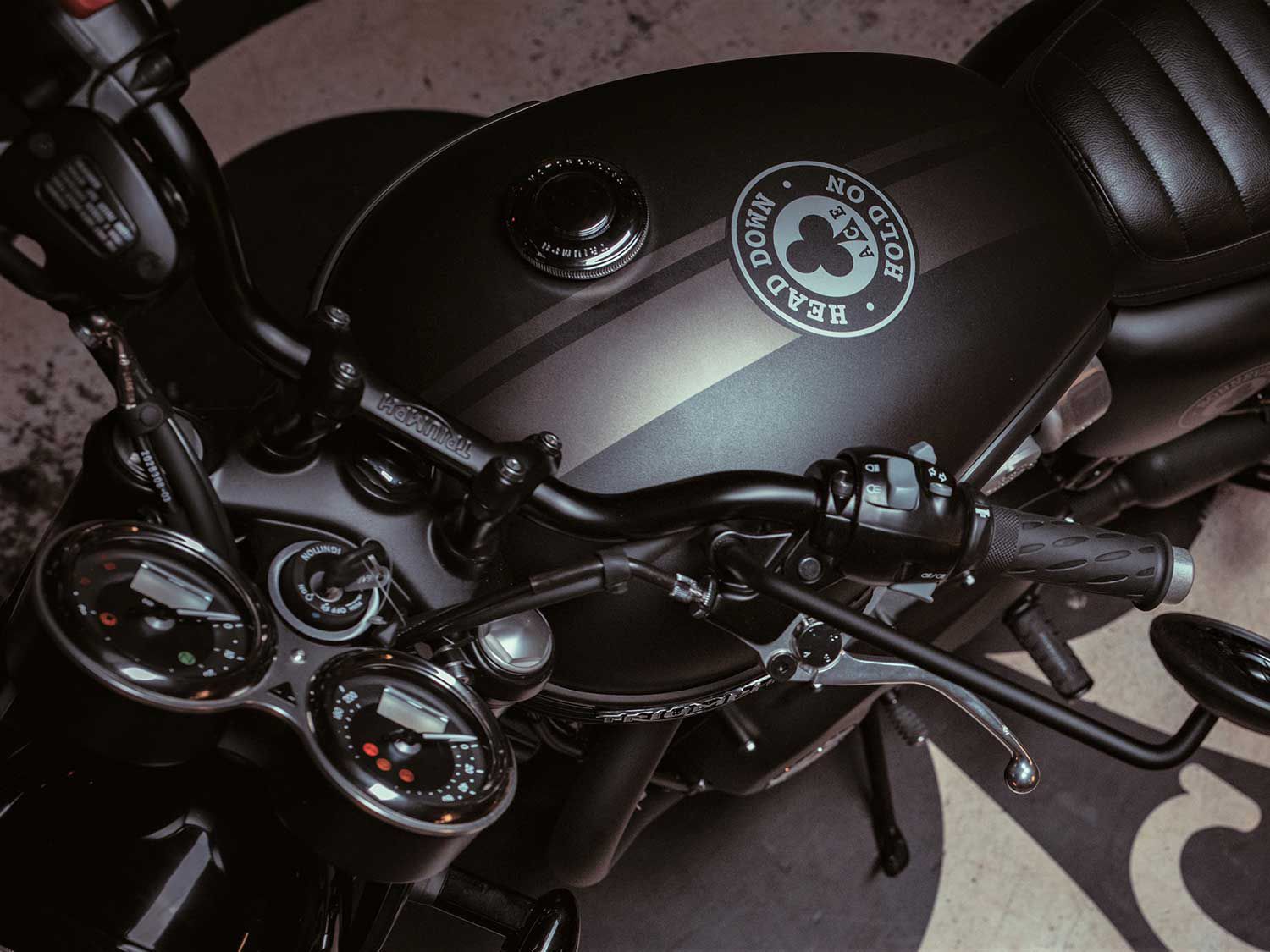 Seems appropriate. The classic “Head down—Hold on” phrase is emblazoned on the tank of the Bonneville T120 Ace edition. (Triumph Motorcycles/)

The Bonneville T120 Diamond Edition meanwhile celebrates the 60th anniversary of the Bonneville, a British motorcycle legend. The iconic twin was first rolled out in 1959, and for 2019, the Diamond Edition pays tribute with a one-off premium paint scheme and a unique level of high-specification finish and detailing ladled atop the classic style and modern capability of the standard Bonneville T120. That higher standard of finish includes an exclusive white and silver tank design with striking Union Jack flag graphics, a special Bonneville T120 Diamond logo on the side panels, chrome Triumph tank and engine badges (recalling the Thunderbirds of the 1950s), and chrome chain guard. This model will get a limited run of only 900 units worldwide and each will come with a numbered certificate of ownership signed by Nick Bloor, Triumph’s CEO. They’re available to order now, with pricing set at $12,350. 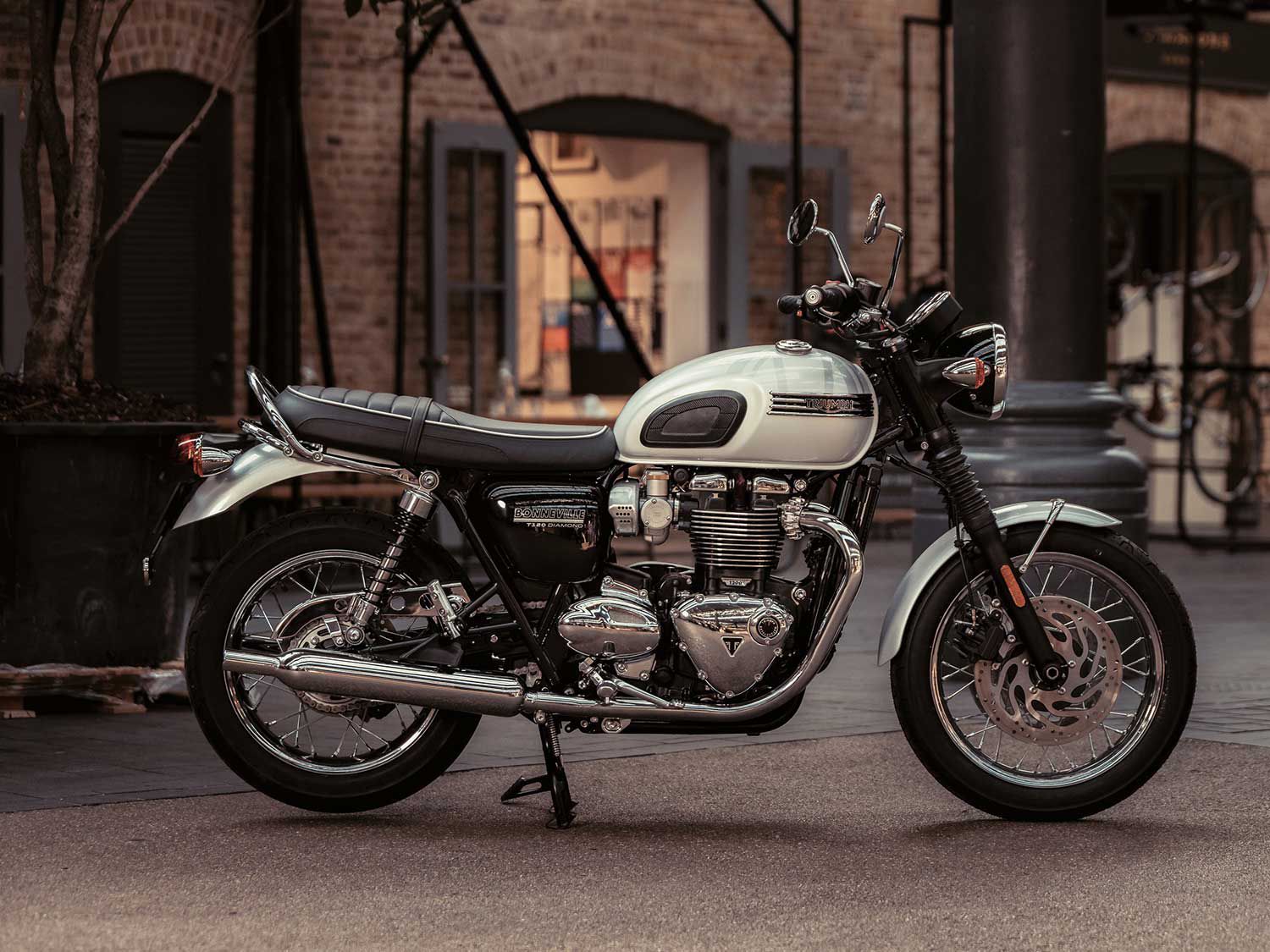 The T120 Diamond Edition embraces the Bonneville’s 60th year as a Brit motorcycle legend. The run is limited to 900 units. (Triumph Motorcycles/) 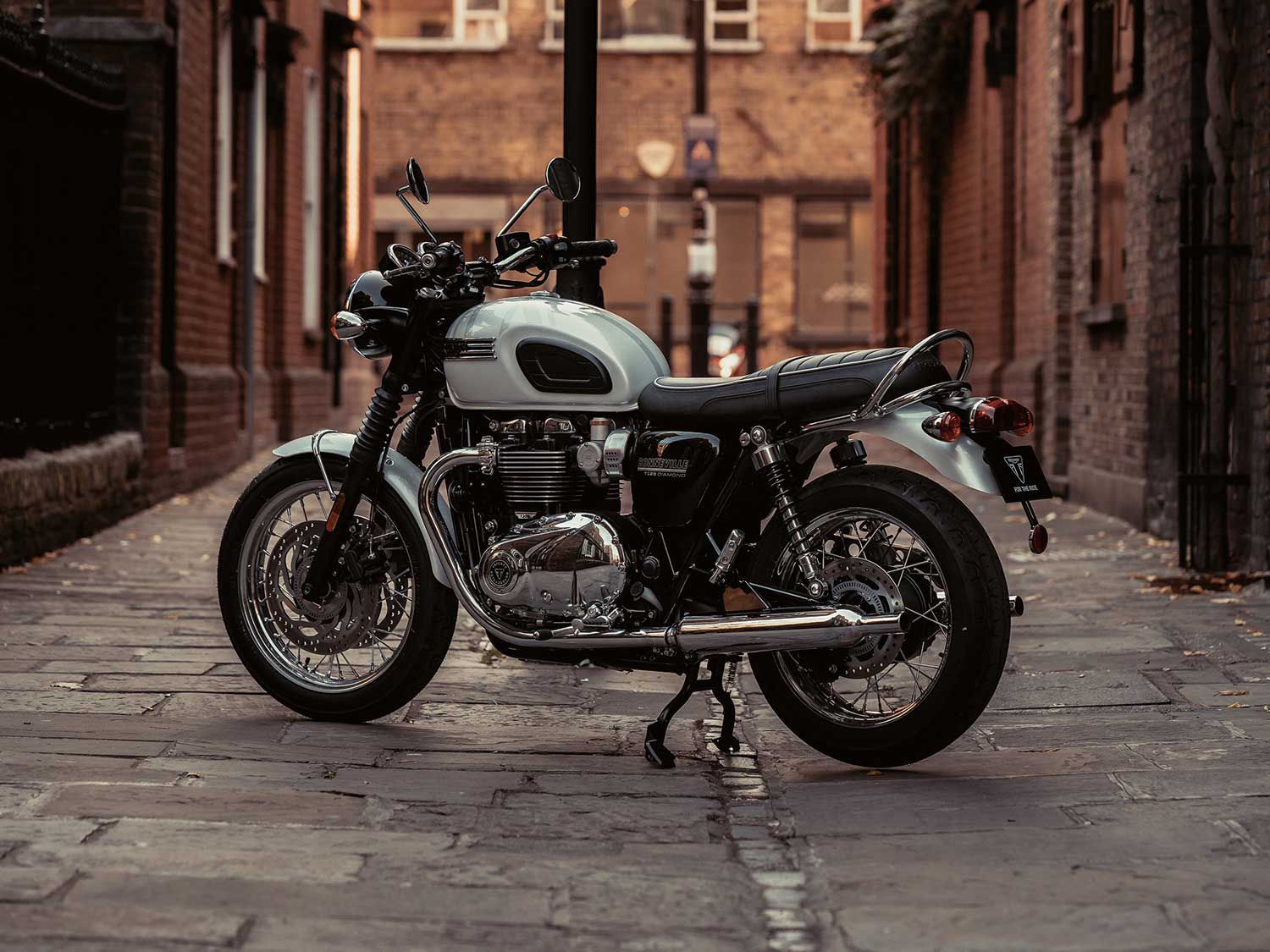