Come ride with me
Through the veins of history
I'll show you a God,
Falls asleep on the job
And how can we win
When fools can be kings
Don't waste your time
Or time will waste you

GREENLAND'S END
China carbon neutral by 2060.  Not good enough.  Carbon capture an essential part of facing climate change (i.e. planting tree just isn't going to cut it by itself).  Close but no cigar.  Kids climate striking in the middle of a pandemic.  Hardly terrorism... - and no worse spread of lilifluenza than we get in any other riot protest or, for that matter, in the all the schools that are open around the world right now.  One of my grander predictions, that ''they'' would actually directly tell the world that we had passed too many tipping points and gone too far and that climate engineering was inevitable, did not come to pass.  Although we were very close.  The Green Phase has otherwise played out in exactly the way we arrived at - a drawing of focus to green issues elegantly semiotically tied to the concept of Green Zones in the pandemic, a ''de-greening'' phase of stacked water-themed environmental disasters and other weirdness and a spectacular finale of apocalyptic lightning fires of the world's fifth largest economy with pledges of Green Recovery, Carbon Neutrality and Building Back Better all round. We got our ''aliens'' in the form of ''Life on Venus'' and we even finally, finally this time, solved the murder of the elephants - this detective case running throughout the whole of the phase for those with eyes to see. 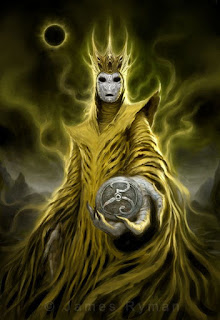 If it seems weird to know this it's only because I've unfortunately seen the script of that accursed play ''The King in Yellow'' (or at least the scene list and a hazy outline of the scene description) - and anyone can look, the difficult bit, as with most things Lovecraftian is staying sane while doing so.  We can clearly see the broad terrain of the Yellow Phase, as its been heavily signalled and detailed so we are in the position of knowing roughly what will happen in the closing quarter of the Year of Lilith (although I am sure it will both surprise us and let us down at points as the Green Phase did).  We can even begin to see the edge of the anti-Mauve Zone (my little joke I mean the Qlipha of Yesod) with Japan's announcement of successful trials of UV-C.  If in 2018 (The Year of Yesod) I would have told you that by 2021 (The Qlipha of Yesod) all of our breathable air in confined spaces like malls and trams would be filtered through giant UV radiation sterilizing it for safety you rightfully would have thought I had lost the plot.  What else would necessitate putting UV lights everywhere?

Although what we are espousing here is strange in and of itself, if the scientist in me was asked to name the two greatest threats to civilization over the next decade they would be climate change and biological terrorism.  Yellowcake may well come up in the Yellow Phase but Nuclear War is very 21st century; although the chance of nuclear weaponry falling into the hands of terrorists is a real concern, state players on this scene have to go through a very long process of building up the academic potential and then the industrial potential to even start their own nuclear weapons project.  Its worth speculating on biological terrorism and the environmental crisis as slightly more ''adult'' starter conspiracies if you are trying to wean people off Q-anonense.  As I said above what I believe is weirder than these two but I think they are useful gateways towards getting a broader appreciation of what is going on - what might be happening is that a strange heresiarchial cult of power is trying to navigate those two threats in the way that a strange heresiarchial cult would.

''We don't need to weaponise the flu, the birds are doing that already'' Laurence Fishburne's CDC character informs the government when asked in the film Contagion - now while that line being a lie as we definitely are weaponizing the flu (''gain of function'') it is true in that microbial pathogens are constantly adapting to our attempts to exterminate them.  Coronavirus is nowhere near the threat that multi-drug resistant bacteria will be in our very near future.  With anti-biotics nearing the end of their shelf-life we could argue that a planet-wide biological security infrastructure was necessary with that justification alone.  The fact that the technology to manufacture deadly tailored pathogens is now far cheaper than generating yellowcake and that China, Europe and America have all pissed off two groups a) radical Islamic terrorists and b) rich radical Islamic patrons - probably started a lot of terrifying panicked conversations in various Departments of Defence.  Biological attack of a variety of forms throughout the 20s is almost certainly guaranteed and you can think of what we are building now as a kind of Civilian Defence Infrastructure in the same way we had fallout bunkers, etc during the threat of nuclear war.  I am not saying this is the case but it is a more plausible and reasonable justification than a lot of the pre-School conspiracy thinking on this.  Because when it does happen, and it will, we will be very very glad of having all that UV equipment, mask policies, control of information, industrial experience of rapid vaccine construction and distribution, etc etc etc in place.  In that way, what we are experiencing, including the ''info-war'' part could be a drill.

As I have repeatedly pointed out on the Hermetic Lessons, the environmental catastrophe is more than enough of a reason for these adjustments to society that are taking place without need for any other.  Look at the total world's concentrated death energy fossil fuel consumption in the years since Greta has been alive this is true and make a ratio with the rest of our historical production and you will reach a scary realisation that we are undeniably seeing the consequences of.  Mass civilian aviation pumps greenhouse gases right into the stratosphere, sometimes that happens just to fly an avocado across the Atlantic not a human.  Let's all admit that that is moronically decadent. The fact that we are being led by an socially engineered child on this front is a searing indictment of the childish and banal nature of the majority of adults living today.  You don't even need climate change to justify tidying up the god awful mess we have made of this planet.  Open caste mining; oil slicks coating lush tropical islands; acidic rain; air pollution; lung disease; it's all extremely grim.  How much of the world has to be on fire for people to stop saying ''this is natural''?  Not ruling out the use of weather weapons by state actors or extraplanetary influence or even Revelations but again split the difference. We would need to react and build infrastructure.  The alternative is to sink beneath the waves.

We find ourselves in very dangerous and difficult times and I wanted to reassure my more spiritually leaning readers that I have not become only an armchair conspiracy theorist howling at the Moon during this long journey.  Practical work, utilizing a variety of different approaches began before lilifluenza hit the western world and has matured throughout the pandemic.  With that in mind I would like to invite you to enjoy the Perseus Protocols which will be a page dedicated to recounting parts of that journey and also inviting others to join us and share our practice.  We arrived at Perseus as a figure we could rally around, I hope you can share the same experience.

Sometimes change is good and sometimes change is bad.  You are not the person you were ten years ago, and by extension you are not the same person you were ten seconds ago.  The sense of self flows through us and as the vessel changes with time so does the shape of the ruach, the breath-wind - some people change less being made of different stone, some change smoothly and readily.  There is a difference between natural change, the gracefully eroded face of a mighty cliff, beit sandstone or granite, and forced change, where an outside agency is undermining your behaviour, assaulting your logic, demolishing your core and shaping that cliff into part of its own monolithic face.  Maybe this is necessary, maybe individuality is too expensive on a planetary scale, at least as individuality was imagined in the American Dream - I could be convinced - but either way it did not have to be quite so brutal if education had not been purposefully starved and the doom clock allowed to run to its last grains of sand.  Our challenge now, as soldiers, is to stand firm and shield in the face of all of this psychic assault.  You are defending Reason itself, if everything else passes in the next decade and you still have Reason you've won.  Even if you only have one point left.  Make a phalanx where you can, these demons are large, or stand alone with perfect courage. Give ground if necessary, but like Socrates, if you retreat, retreat in good order to a better position.  Regenerate your reason at the Perseus Protocols.

LaptrinhX
—
2020 - The Year of Lilith, Greenland's End & The Perseus Protocols
Share this