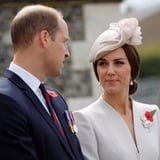 The British royal family is about to add another prince or princess to its lineage, and it looks like baby number three will be making their debut in the Spring!

On Sept. 4, Kate and her husband, Prince William, formally announced that they are expecting their third child. Ever since that moment, fans of the royal family have been wondering when Prince George (who is 4 years old) and Princess Charlotte (who is 2 years old) could be expecting their next sibling.

Related
This Royal Rule Will Secure Princess Charlotte's Place in Line For the Throne After Baby No. 3

While the Duke and Duchess of Cambridge have always liked to keep their family life private, the duo announced in October that their newest bundle of joy is set to arrive in April 2018!

The Duke and Duchess of Cambridge are delighted to confirm they are expecting a baby in April 2018. pic.twitter.com/jOzB1TJMof

Kate was forced to cancel a few of her public appearances at the beginning of her pregnancy due to her suffering from the debilitating hyperemesis gravidarum, but since then she started stepping out again. Now that she's feeling better, we can expect to see a lot more from the royal duo before they become a family of five.