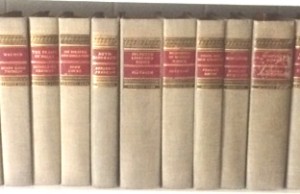 I don’t think it’s possible to list all the ways that reading has enriched my life. Maybe I would have been a voracious reader no matter what, but I know that I’m the reader that I am today in large part because of some very special people. Let’s start with my high school freshman English teacher.

Over the years, I’ve encountered a lot of parents and teachers who are convinced that many serious books are simply too difficult for teenagers. Many of them also think that youngsters shouldn’t read “disturbing” books. But I was blessed with the experience of reading, analyzing, and discussing serious books when I was 13, thanks to Mr. Irwin Hoffman, who taught the freshman English class at the Bronx High School of Science.

Mr. Hoffman’s class would send those people who worry about disturbing subjects running, screaming, for their safe spaces. In Mr. Hoffman’s class, we read a book a week. Many of those books, like The Diary of Anne Frank, Hiroshima, and The Autobiography of an Ex-Colored Man, were indeed, disturbing. When I look back on that, I think the disturbing part was great.

Mr. Hoffman wouldn’t let you get away with just knowing the basic plot or outline of the book. He called that stuff “who kicked whom in the belly.” You had to know that, but you also had to think about what you had read and sharpen your thinking against the thinking of other people in the class, and Mr. Hoffman himself.

I don’t know who Walter J. Black actually was. I do know that there was a publishing company that bore his name and published all kinds of books, and that placed ads in magazines of all kinds. When I was about 19, I responded to one of those ads, which offered me three classics for about a buck. One was the Complete Works of Shakespeare. I don’t remember the other two. After that, I got a book every month, which I could keep and pay for or send back. I never sent one back.

I was a member of the Walter J. Black Classics Club. Those books introduced me to a range of classics I had not encountered in school. Two of them, Marcus Aurelius’ Meditations, and Benjamin Franklin’s Autobiography, became lifelong friends and books I go back to often. The Club also sent me many books that wound up influencing my thinking, like Emerson’s essays. The picture above is of some of the volumes I still have, fifty years later.

When I was a boy, the classics were considered something that everyone should read. Today, the prevailing notion seems to be that they’re dust-covered relics of an earlier age, interesting, perhaps, but not really worth your time.

Thanks to Walter J. Black, whoever he was, I know better. I know that classics are classics for a reason, and that the reason is that they profoundly affect your character and the way you approach life. For all of that, thank you, Walter J. Black.

My parents were always reading. Every night they sat in their separate chairs reading their books. They read all kinds of books, and they each introduced me to reading that’s become an important part of my life.

My dad was the ultimate voracious reader. It wasn’t unusual for him to finish more than one book in a single evening of reading even after he had gone to the meetings that pastors must attend. Dad inspired me with his reading, but more with his love of history and biography. Today they’re still mainstays of my reading and my enjoyment.

My mother introduced me to poetry. She loved poetry that you could read aloud, especially Tennyson and Dylan Thomas. When I visited her in the hospital on the day that she ultimately died, I read poetry aloud to her. Among the poems was her favorite, Thomas’ “Fern Hill.” That night, the final lines of that poem would echo in my memory when we made the decision to follow her wishes and remove the life support.

Thanks, mom and dad for everything including a great example of what voracious readers look like.

A lifetime of reading has made me a better and happier person. I’m thankful to my parents, to Mr. Hoffman, and to Walter J. Black, for making it better than it would have been otherwise.

LaptrinhX
—
Thanks to Irwin Hoffman, Walter J. Black, and My Parents
Share this