A new update has started rolling out to the Sony Xperia XZ, Xperia XZs, and the Xperia X Performance. This is actually a December security patch update for all three devices, and it comes as a build number 41.3.A.2.24. As far as other changes are concerned, there’s no such info provided, so this is probably just a December security patch with some optimization updates, quite probably.

Do keep in mind that this update started arriving to unlocked versions of all three devices, and that this is a staged rollout, so the update may not be available to your device this very moment, but it will be soon. Also, it is quite possible that you may notice some other changes that this update brought along, but don’t expect new features, as something like that would have been mentioned by the company already. The source did not reveal how large is this update, but it’s probably not all that big, though make sure you’re connected to a Wi-Fi network, just in case. Now, once the update is available for your handset, the phone will notify you, though you can also check whether it’s available manually, by navigating to your Settings apps, and then find the update menu.

Having said that, the Xperia XZs is the only smartphone, out of the three mentioned in this article, who launched this year, back in February. The Sony Xperia XZ and Xperia X Performance were both announced last year. Having said that, neither of these devices is the company’s flagship handset at the moment, the Xperia XZ1 is, a device which was launched a couple of months ago. Now, we’re not sure when will the December security update land on other Xperia-branded smartphones, but stay tuned, that will probably happen in the near future. It’s also worth noting that Sony is planning to change up its design next year, so you can expect to see considerably thinner bezels being included in the company’s phone starting in 2018, which means Sony’s consumers won’t be forced to deal with such thin top and bottom bezels, which is a design that the company has been using for years now. 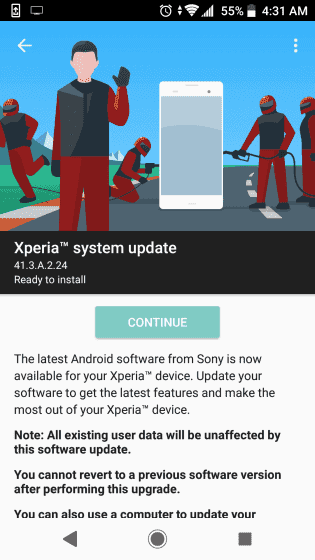