By Genevieve Casagrande
Russia has escalated its air campaign in Syria in an effort to deter and undermine Western military action. ISW assesses with high confidence that Russian airstrikes targeted areas held by the New Syrian Army -- an opposition group that has reportedly received training through the U.S. Department of Defense train-and-equip program -- near the Syrian al Tanaf border crossing with Iraq on June 16. Anonymous U.S. Defense Officials claimed that Russian sorties later returned to conduct a second strike against New Syrian Army positions. Russia has used the strikes to renew calls for the U.S. to “share coordinates” of U.S.-backed opposition groups. The attack on the U.S.-backed group and the U.S.’s subsequent inaction further undermines Western legitimacy in Syria. The strikes are a clear demonstration of Russia’s willingness to escalate with the U.S. and likely belief that the U.S. will be unwilling to sufficiently counter the provocation.
The attack against the New Syrian Army follows a series of escalatory steps between the U.S. and Russia in Syria over recent weeks, including the deployment of the USS Harry S. Truman Carrier Strike Group on June 3 to the Mediterranean Sea in order to conduct strikes against ISIS in Iraq and Syria. Russia subsequently deployed long-range naval reconnaissance and anti-submarine warfare aircraft to theater, which was documented in Aleppo Province by local Syrian activists on June 5. Russia also began to project force into Eastern Syria from June 5 - 17, intensifying its own aerial bombardment of ISIS-held terrain in ar-Raqqa and Deir ez-Zour Provinces. The U.S. has nonetheless continued to conduct strikes against ISIS from the Mediterranean, relieving the Truman with the Dwight D. Eisenhower on June 13.  The deployments of U.S. strike carrier groups are likely in response to concerns over the long-term presence of Russia in the Eastern Mediterranean Sea and the potential development of Russian anti-access/aerial denial (A2AD) capabilities from its basing inside Syria.
Russia is clearly demonstrating its freedom of action in Syria, despite U.S. efforts to enforce a diplomatic solution to the Syrian Civil War. Russia continued to bombard opposition-held areas in Aleppo Province amidst a temporary ceasefire agreement in Aleppo City from June 16 - 17. ISW was able to assess a total of 14 Russian strike locations in the Aleppo area with low and high confidence during that time period. The announcement of the nominal ceasefire and Russia’s continued demonstration of force in the area is indicative of its intentions to obfuscate its role in exacerbating the Syrian conflict. Russia’s violation of the ceasefire agreement demonstrates that it remains undeterred from continuing its campaign against the Syrian opposition despite statements threatening a greater U.S. response, including US Secretary of State John Kerry’s June 15 statement that the U.S. is not “going to sit there while Assad continues to offensively assault Aleppo and while Russia continues to support in that effort.” Kerry’s statement follows a significant escalation of Russian airstrikes in Aleppo to rates that have “exceeded the pre-cessation of hostilities totals,” according to Director of the CIA John Brennan.
The following graphic depicts ISW’s assessment of Russian airstrike locations based on reports from local Syrian activist networks, statements by Russian and Western officials, and documentation of Russian airstrikes through social media. This map represents locations targeted by Russia’s air campaign, rather than the number of individual strikes or sorties.
High-Confidence reporting. ISW places high confidence in reports corroborated by documentation from opposition factions and activist networks on the ground in Syria deemed to be credible that demonstrate a number of key indicators of Russian airstrikes.
Low-Confidence reporting. ISW places low confidence in reports corroborated only by multiple secondary sources, including from local Syrian activist networks deemed credible or Syrian state-run media. 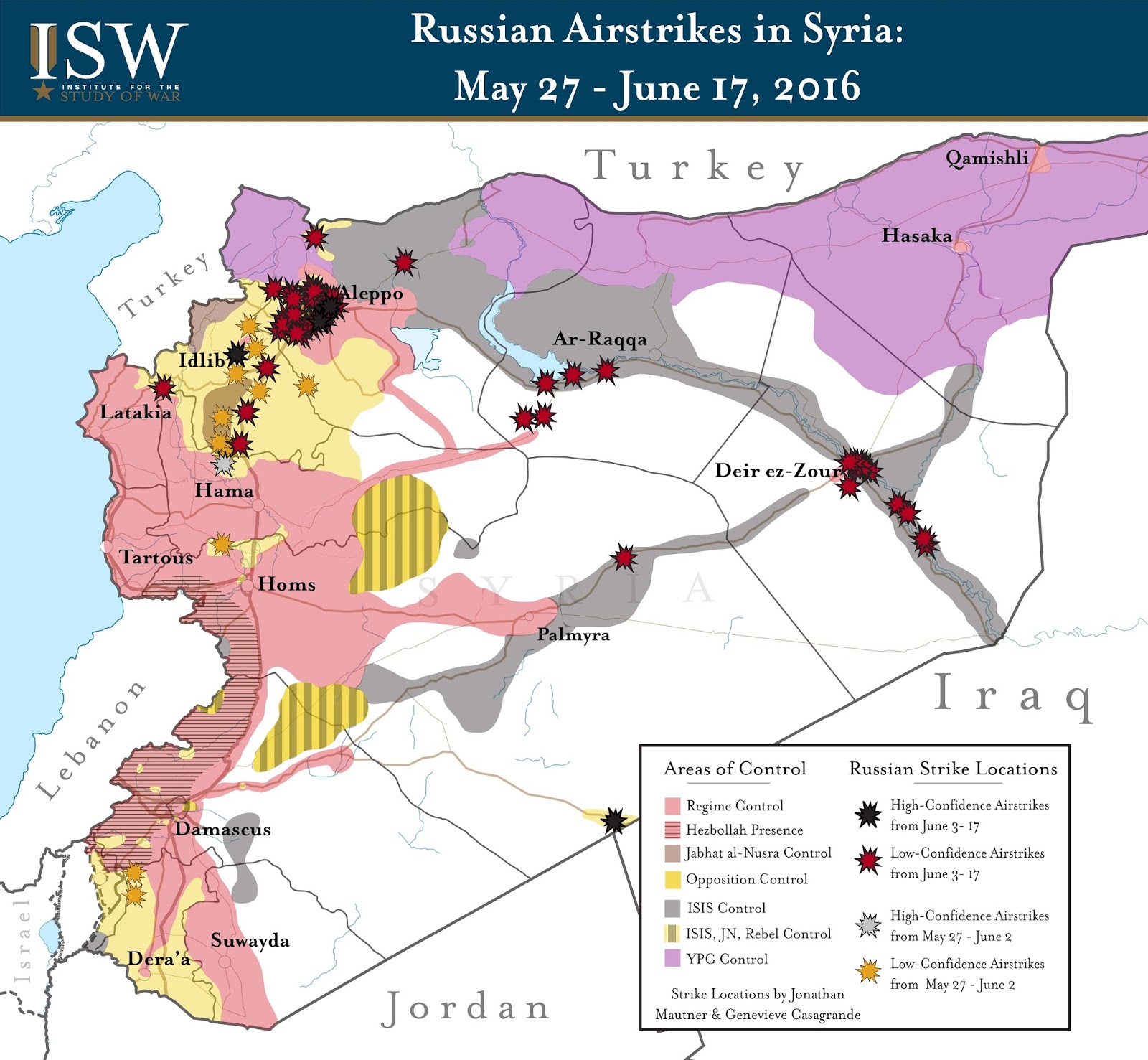