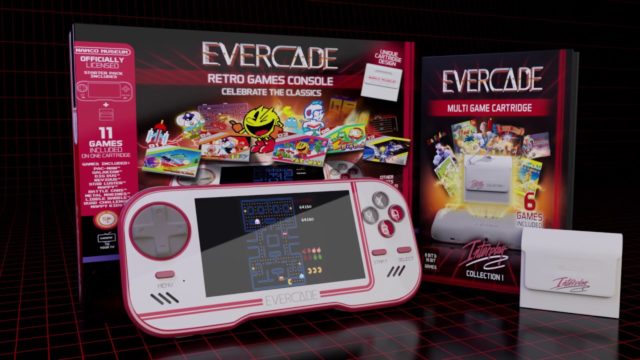 Evercade was announced a few months back and, initially, it was an interesting proposition if not especially notable. There have been a lot of retro machines popping up of late, after all. A video game console that could be played on the go or plugged into a TV (not unlike Switch) dedicated to retro and retro-inspired gaming? Okay, now maybe it was time to lean forward in our chair and pay more attention. As the months have rolled by and more and more information has been released, Evercade has become not just interesting, but instead downright fascinating. Give the system a look in the trailer below:

As can be seen in the video, Evercade is shaping up to be one heck of a destination for fans of classic video games! The system’s games are cartridge-based and each (at least to this point) comes with multiple titles packed in. Evercade is about 8 and 16-bit software, as well as modern games that feature gameplay and visual styles based in the pixelated glory days of yore. As of right now, these multi-pack cartridges will be sold for $19.99 a pop, while the console itself will go for $79.99 (that price includes a game). Those wanting to spring for the Premium set will get three cartridges for a grand total of $99.99. That’s a lot of games and a system for just under $100!

Evercade is expected to launch on March 20, 2020. The system is said to offer save states of some kind, “exclusive collectible elements,” and the promise of an internet-free experience where fans are promised “yours to keep. Forever.” For all of the details on what games will be available at lunch, hit this link. Some highlights include:

There are a lot more games than that, with more on the way. A list of retailers is still forthcoming, but once we know who will be selling Evercade we’ll be sure to let you all know. In the meantime, we’re anxious to get our hands on the device and let you all know if it lives up to the momentous hype that’s being built!