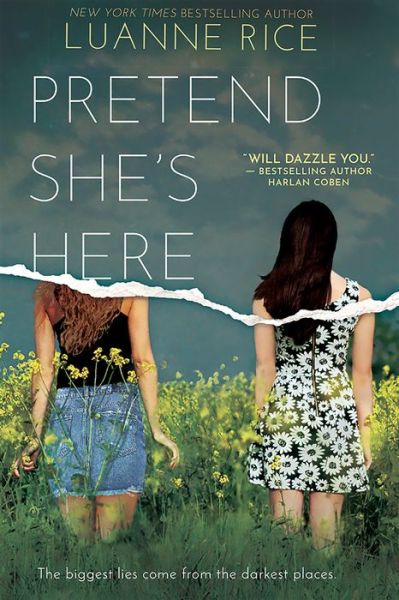 My mouth felt dry, the way it did after I’d been home from school throwing up from the flu. Now I had a streak of dry vomit on my cheek that made me realize I’d gotten sick.

We were still in a minivan, but now the seats were black instead of beige. The familiarity smashed into me—this was the original Porter-mobile, the one Lizzie had known, which I’d gotten a million rides in. Somehow the Porters had ditched the white van while I was passed out. Switching vehicles was some kind of terrible sign. We sped along a highway without much traffic. Then an eighteen-wheeler passed us, so close it made the van shake.

My stomach heaved, and I retched.

“Oh God, she’s going to do it again,” Chloe said in a high, thin voice.

Mrs. Porter turned around and jammed a bucket into my chest. I tried to reach for it and realized I couldn’t move my hands. They were bound behind me with something so hard and tight it cut into my wrists. She held the bucket while I threw up until there was nothing left in my stomach.

My head lolled. I was so tired, and I wanted to fall back to sleep, but I forced myself to take some deep breaths of stale minivan air and try to clear my head. I was having a nightmare. That was all this was. It was just because I’d been thinking of Lizzie so strongly. I had conjured her family. An evil version of the Porters, but that’s a nightmare for you: scary and horrible, nothing like real life.

Then Chloe said, “Yuck, it stinks,” and opened her window. A blast of cold air knifed in, and I knew for sure I was awake and this was reality, not a bad dream.

“How much farther?” Chloe asked.

“If I have to tell you one more time to sit still and not think about it, you’ll be sorry,” Mr. Porter said.

“I have to pee, too,” I said. My voice sounded raspy, and my throat hurt.

I saw Mr. and Mrs. Porter look at each other, their profiles silhouetted by the bright lights of an oncoming truck. With a furious sigh, Mr. Porter yanked the wheel to the right and we bounced onto the rumble strip along the side of the highway.

“Where are we supposed to go?” Chloe said. We were on the edge of a forest, tall pines growing straight into the stars. “Can’t we find a rest stop?”

“This will have to do,” her father said. Doors opened, and Lizzie’s parents got out. Mrs. Porter took me gently by the arm and helped me out of the van. My head spun, and my knees buckled. She scanned the area, then led me onto a rough path into the pines. The air was cold. I could see the white clouds of my breath.