We’ve already highlighted some ways that designers can learn from the movies they watch, but what about photographers? “Motion pictures” have obvious parallels to photography, and image professionals could learn a thing or two from what appears on the big screen.

Careful study of your favorite films can yield surprising results for those who aspire to hone their photography prowess. Fortunately, you don’t need a degree in film to take a few cues. Breaking down specific scenes that tickle your fancy and even grabbing still frames is great practice when trying to see what makes a film have great cinematography.

For those who aren’t aware, cinematography essentially is comprised of several fundamental elements. These include effective lightening techniques, color, focus (or deliberate lack thereof), shot composition, and of course camera movements, just to name a few. I won’t rely on any specific film terminology, but I will be giving basic guidance on how film techniques can be adapted to make you a better photographer. You might notice that a few of these techniques can be applied to web design and illustration as well.

Color plays a vital role in any aesthetic application, and film is no exception. The introduction of motion and dynamism does not replace or supersede careful, deliberate color choices, the concept is no different when applied to photography. The amount of color (or lack thereof) and the vibrancy in a photo provokes an emotional response and a relationship between the viewer and what they are viewing. The amount of color used and how it is edited in post-production can affect the meaning and feeling of the image. A good example that translates well from film to photography is Tarsem Singh’s The Fall (2006). 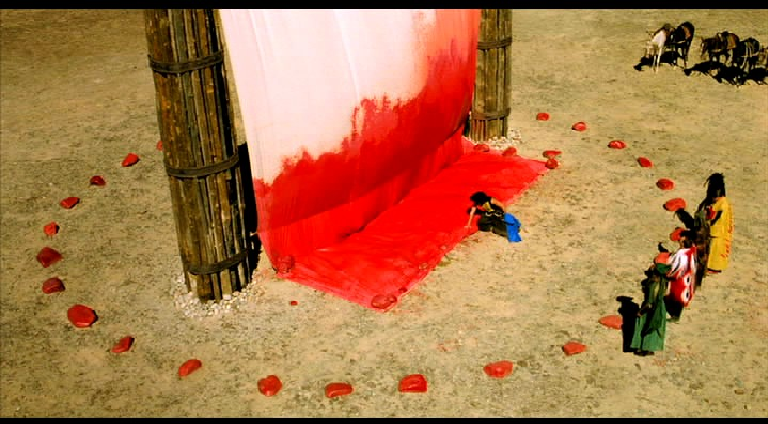 Without a doubt, the film is cinematically beautiful and features an engaging storyline that merges dark themes with childlike wonder. This is expressed perfectly with the use of locations, costumes, and other visuals. This particular scene (above) is just one of several shots that feature an enormous emphasis on color.

At this point in the story, the protagonist reveals his alter ego, the “Red Bandit,” who found his counterpart — “Blue Bandit” — murdered by the villainous “Odious.” He then proceeds to make a blood oath and vows to destroy Odious. The red (representative of the blood of Blue Bandit) stands out against the large landscape backdrop and is further emphasized by how it contrasts and bleeds onto the white canvas. The color red may be used several times in the film, but it isn’t the only color present. The costumes of the Red Bandit’s companions are all in colors that stand out vividly against backgrounds.

When you’re photographing in color, try to use adequate light to bring your colors out. Prominent colors are eye-catching and can highlight various facets of your photo, even if you are using darker colors. If your colors aren’t as bright as you would like, you can always correct this during post-production, but be careful not to push colors too far, or the process can can lead to ugly results.

The difference between a photograph shot head-on and a photo taken from, let’s say, a canted angle can make a tremendous impact for such a small aesthetic choice. A viewer might do a double-take or view your photo longer if you avoid typical, standard positions. Your subject or subjects can also help you decide whether or not a dynamic angle should or shouldn’t be used to enhance the image. There are hundreds of shots in the Lord of the Rings trilogy that are composed of dynamic angles, so let’s take a look at one of the scenes from Lord of the Rings: The Two Towers (2002) directed by Peter Jackson. 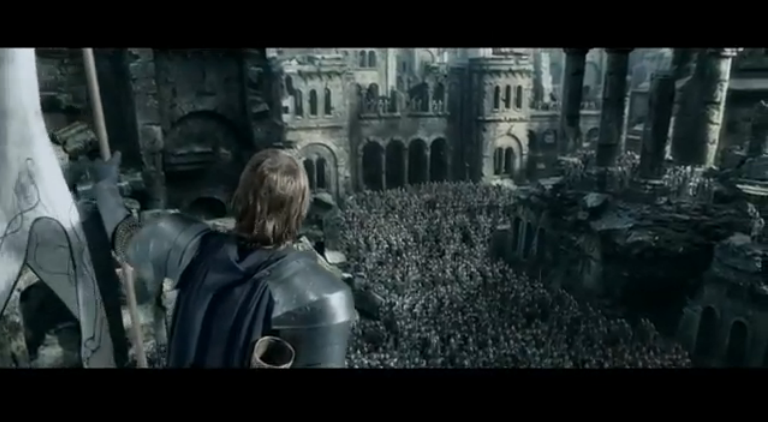 Most of you are probably already familiar with the ubiquitous Tolkien storyline, as well as the tremendous complexity and effort that went into creating all three films. Standard shots filmed on a flat plane with no skewing or canting would not have been enough to capture this epic trilogy.

The scene featured above can be found on the extended edition, as it was cut from the original theatrical release. Here we have Boromir (Sean Bean) fresh from the victory at Osgiliath speaking atop of a structure. The scene is essentially a victory speech laden with emotional words, and it’s only fitting that the angle of the camera is positioned in a manner that not only gives you a view of Boromir, but also a wide shot of his victorious army. The shot is expansive and it adds dynamism and depth to an emotional scene.

If you are in a position (literally) to shoot photographs with more dynamic angles, try it out, and consider taking a lesson from Peter Jackson’s book by adding depth of field to your image. Landscapes and architecture photographs can reap especially strong benefits if what you are capturing is already visually stunning. More abstract, artistic portraits can also be elevated with some non-traditional angles. If the space you are working in happens to be too cramped to allow experimentation, try lowering or elevating your viewing angle to compensate.

Whether your work features vibrant colors or no color at all, your photos should boast some strong contrast. Contrasts can function as differences of light or color, but either technique accomplishes the same distinction of features within your imagery. Using contrasting lighting and/or color can transform your photo from flat and simple into a deep, engaging, captivating visual. At its most basic, a good use of contrast separates the subject from both the foreground and background. Director Park Chan-wook’s Old Boy (2003) is a great film to examine when it comes to contrast. 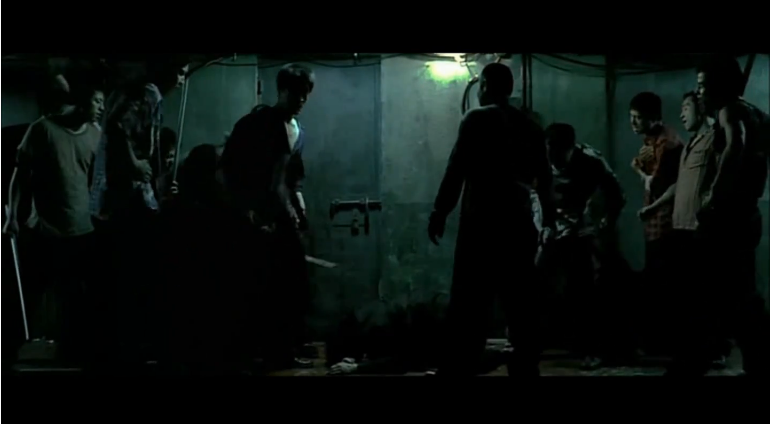 A South Korean mystery thriller involving dark themes, it is only appropriate that Old Boy features stark colors and prominent contrast that gives the film a gritty and raw quality. Although some scenes at times appear almost too dark, it never hinders the film’s aesthetics.

One of the most noteworthy scenes in the film, the corridor scene (which took seventeen takes in three days to perfect) is composed of one single unedited shot. In this scene, the main character Oh Dae-su (Choi Min-suk) faces an angry mob of thugs with only a hammer as lone weapon. The only lighting comes from the lights on the wall, which keeps most of the hallway cast in shadow. Despite the deliberately low lighting, each actor is discernible from the other actors and the background.

It should be noted that at the beginning of the brawl, everything appears dark and heavy, but as Oh Dae-su steadily makes his way down the hallway while taking on the hired gangsters, additional light gradually begins to make the scenery stand out more. This is symbolic of Oh Dae-su’s impending victory and discovery of why he was imprisoned. The lighting and the shot composition give the scene a 2D look — much like a graphic novel — and the fact that the scene is being shot with a laterally-moving dolly suggests the influence of fighting video games, which are enormously popular in Korea.

Remember that you can use both contrast of light and contrast of color within your own images. Experiment with various lighting levels, and don’t be afraid to reposition your subject or camera to explore different lighting. Changing your photo’s exposure or ISO settings can also help draw out more contrast in your images. Using contrast colors and lighting can easily change the mood of your final image.

When you begin breaking down cinematic elements into fundamental techniques, you can see how easily and readily they can be applied to other mediums, including photography and illustration. Next time you watch a film that speaks to you, try going back and examining stills of those favorite scenes. Deconstruct the shot, ponder what makes that scene so great, and then try applying it to your own image work. You might just find that those techniques are enhancing your skills and helping you define your own style.