“We have no choice, General Calrissian! Our cruisers can't repel firepower of that magnitude!”
–Admiral Ackbar 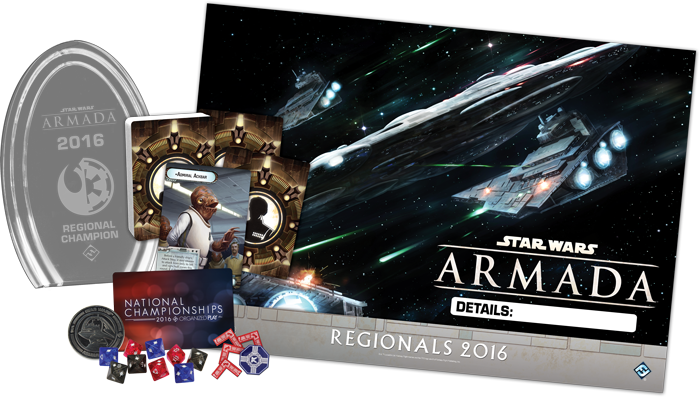 What are the Prizes for 2016 Regional Championships?

In addition, the winner of United States and Canadian Regional Championships will earn a reserved spot at the 2016 Star Wars: Armada World Championship this November! 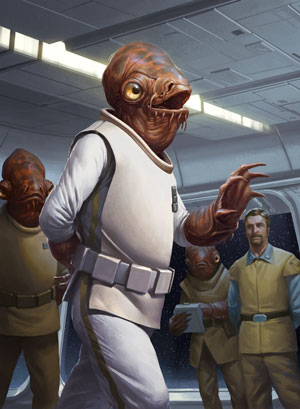 What are Regional Championships?

Regional Championships follow Store Championships in the Organized Play calendar and are the next level in competition, prizes, and prestige. These exclusive events offer players a chance to test their skills against the best players in their region and compete for awesome prizes, including a precious first-round bye at a National Championship.

What Tournament Tier and Structure Will be Used?

Regional Championships are larger events that promote a more competitive atmosphere than Store Championships while trying to attract a wide audience of Star Wars: Armada players. Players can come to these events expecting a high level of competition, as well as a welcoming atmosphere for less experienced players looking to enter a more prominent tournament. From the Fundamental Event Document:

Formal Tournament Tier: Tournaments at this tier expect players to posses at least a minimal amount of experience. Players should be familiar with the game rules, and be prepared to exercise that knowledge to play at a reasonable pace. The focus is a friendly competitive environment.

Advanced Tournament Structure: Tournaments at this tier expect players to have a moderate amount of experience. Players should be familiar with not only the game rules, but also the event regulations. The focus is on a competitive and fair environment.

Over the coming months, numerous players will attend 2016 Regional Championships in an effort to win these attractive prizes and steer their fleets to victory. Don’t miss out on your chance to acquire some of these prizes for yourself and add them to your collection!

Note: The alternate art cards in this kit are produced via FFG's In-House Manufacturing and may appear slightly different in color and texture from the game's other cards. To be tournament legal, these cards must be sleeved with opaque or art sleeves.

Star Wars: Armada is an epic two-player game of tactical fleet battles in the Star Wars universe. Massive Star Destroyers fly to battle against Rebel corvettes and frigates. Banks of turbolasers unleash torrential volleys of fire against squadrons of X-wing and TIEs. As Rebel and Imperial fleets collide, it is your job to issue the commands that will decide the course of battle and, ultimately, the fate of the galaxy.