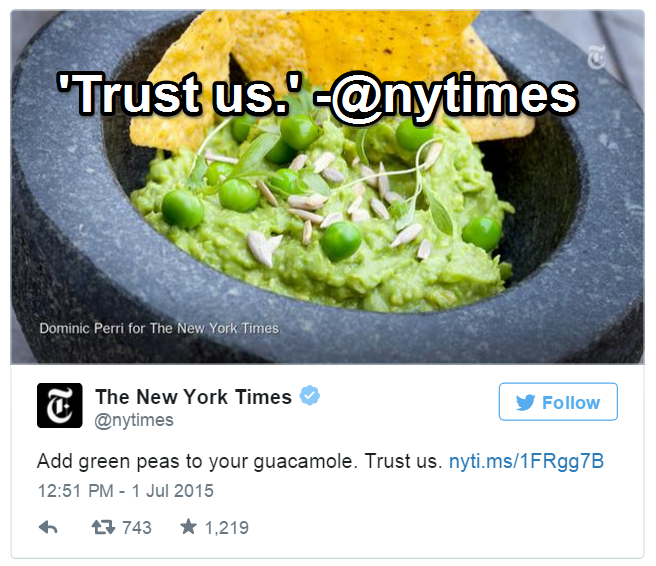 On Thursday, the New York Times posted a recipe for guacamole consisting of the standard avocado base AND a suggested addition of peas. The pea guacamole created an internet backlash, turning a simple recipe page into a culture war. There was no real reason for it to ‘catch on’ as more than just a recipe for a small group of people whose palates ‘get’ peas and read ‘the Times.’ However, the #mediacycle began because it gave content sharing Americans a chance to Average-Joe-ify themselves as good ol’ American guacamole lovers.

The peaguac incident was another community building opportunity for the voice of the internet to be aggregated and recapped. This is just another day on the internet, where content farmers sift through funny, insensitive, and ‘genuinely’ offended tweets and Facebook posts in order to create a national narrative.’ Experts’ can give their opinions on ‘the heart of the issue.’ Supplemental content was generated to supply trendlovers need for auxiliary content in the form of taste tests, local responses, and regular/progressive recipes for everyone to try. This is a race to generate premium, supplemental, ‘pointless’ content. 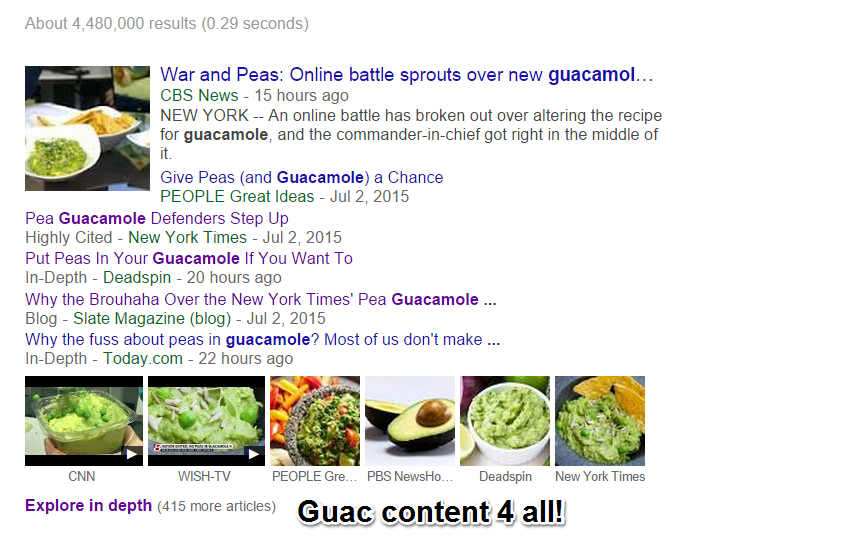 Contributing to a manufactured online discussion makes us more American, poring through the thoughts of strangers. Comedians got to make jokes alongside national brands about the ‘issue.’

The internet received another opportunity to consider itself ‘important’ by hating peas AND the New York Times. Content farms used this curated backlash to create deep, dual voiced content. Content farms can have multiple opinions on the ‘issue,’ creating content for users on all sides of the argument, even those who “see it as silly but still need a big picture thinkpiece to formulate their overarching opinion on everything.” 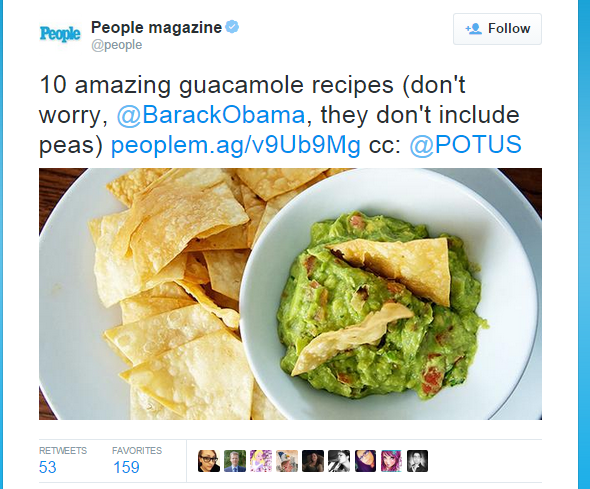 Does this content farm hate the President or not? I wish content on the internet was more black and white/red and blue. Posting recipes that are headline neutral and tweeting a link with a meta-ish opinion is the right way to #socialmediamanage your content farm, brand, or personal account. 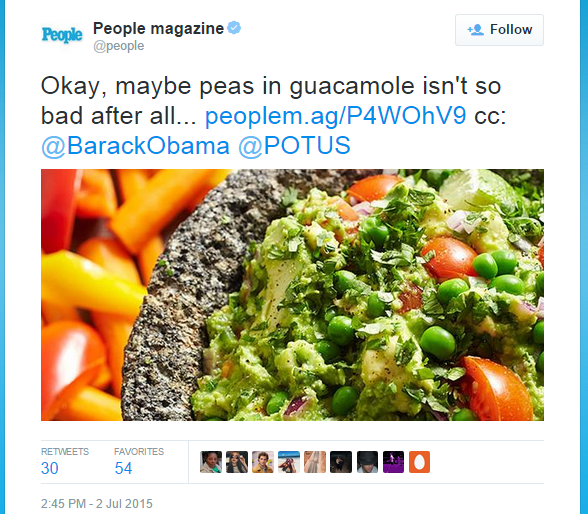 If an American doesn’t want to bite into it, they sure as hell don’t want to see it suggested to them in their social media stream. They are not interested in clicking thru, unless a recap story is written to #shame and #cyberbully the potential food trend.

The TexMex version of guacamole is an American staple that shouldn’t be tinkered with, just like hamburgers, hotdogs, Chinese food, pizza with stuffed crust toppers and turtle cheesecake macarons. Across all party lines, religious backgrounds, and racial+sexual identities, American content consumers feel passionate about what makes them American. 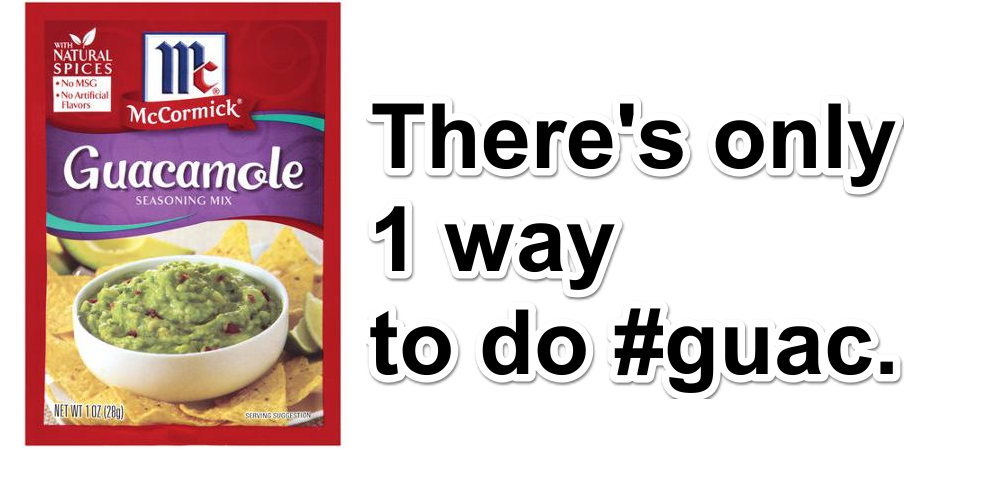 #Guacgate AKA #peagate AKA #peacamole AKA the Guacappening also shows us the important role of Googlable online recipes on the impact of the American palate. Content farms are important culinary guides in the same way that the health content farm WebMD influences people who think they are sick. There’s engineered content for people to stumble upon and then ‘resonate’ with after their culinary adventure.

The new American palate is built online. It is aggregated on recipe sites like Yummly, AllRecipes, the Food Network, and food magazine content farms. Users simply search for the recipes or ingredients of their choice, and they land on authoritative pages that give them recipes, even if their spice cabinets might only have makeshift replacements for sumac and saffron. Although there are endless recipes with endless ingredients available, most everyone’s palate stays in their comfort zone. All we are interested in is trying the ‘best’ of everything, according to a recipe title/headline. 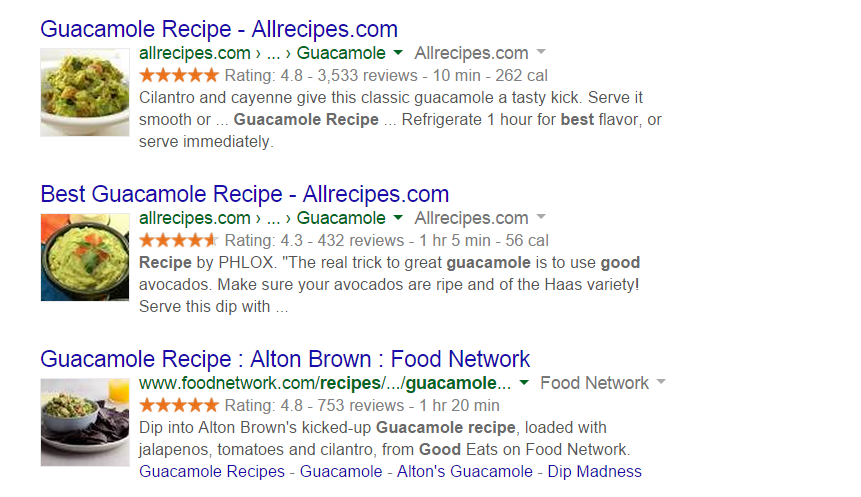 Recipes are an alternative form of media that are a little bit different from news and meme media, but probably more similar to the online lyric industry. If/when a person feels like cooking they can dive into recipe land and start pinning their favorites. It is compiled and organized into SEO-friendly content provided by code-rich snippets encouraged by Google. Sites like the New York Times can use recipes to not just serve their readers fresh, seasonal content, but also amass a massive an archive of recipes that can achieve prime Google position. 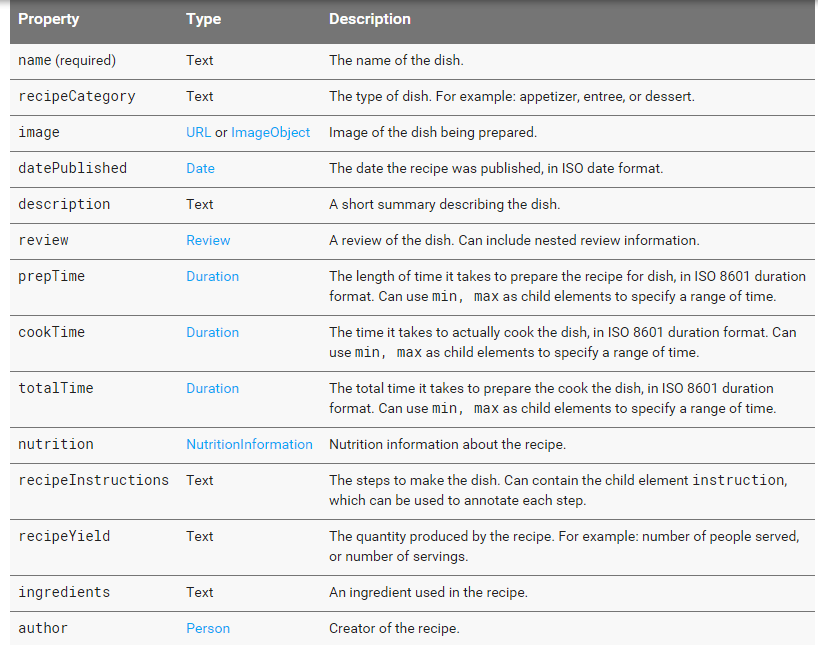 Pea guacamole somehow escaped from this block of code to become a #hot_topic on trend-driven content farms and TV filler news shows.

Unfortunately for peas, the American palate does not want to be challenged by an uppity New York content farm. The American palate wants to iteratively venture in circles, tasting more indulgent versions of things they have already tasted. Floral notes and sweet vegetables like peas are too ‘outside the box’ for American Recipe Googlers. They are looking for crockpot solutions, bacon additions, and the opportunity to stuff anything full of cream cheese. It is difficult to see an average American family even buying a bag of frozen peas, unless someone suffered serious bruising.

So you’re seriously trying to tell us that America has been mashing avocados the wrong way? Not in our U-S-of-A, New York Times. At least not what our Diner & Drive-In professional told us. 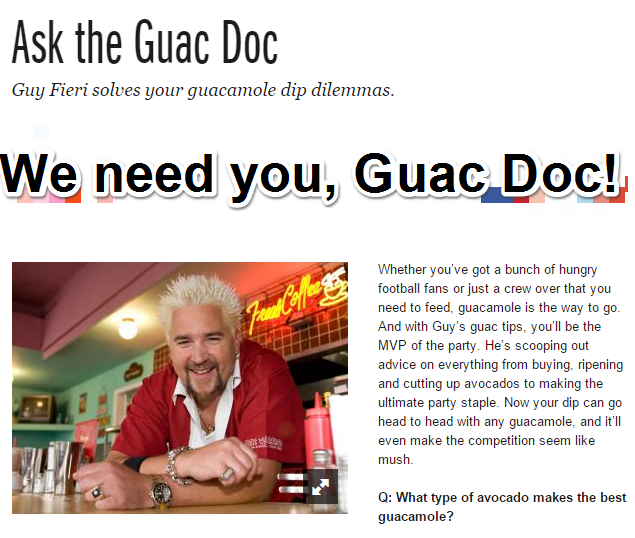 The pea guacamole recipe also tapped into a rare form of negative nostalgia. While a typical Buzzfeed quiz or cultural thinkpiece often challenges internet users to ‘remember that time we consumed culture [via television medium] while we were young’, the idea of a pea was actually a negative childhood memory for those people ‘incensed’ by peas in guacamole. Mixed vegetables with peas, carrots, and corn often meant that peas were filtered out. In order to seem ‘more like an average American’, turning your back on peas is a pro-move. This isn’t what happened with brussel sprouts, which are usually paired with bacon to get over the hump of being a bad childhood family table memory.

This light-hearted debate about guacamole allowed sharers of content to use their strong internet voice on a light-hearted topic like guacamole. This voice is usually reserved to comment on Presidential candidates, the Confederate flag, and other boilerplate issues that annoy people who still use Facebook. Ultimately, the American wants to be seen as the most normal American to other Americans. The Facebook feed is usually their only release, but it also requires a linked node of content to accompany the opinion, explaining the near-trend to their network. 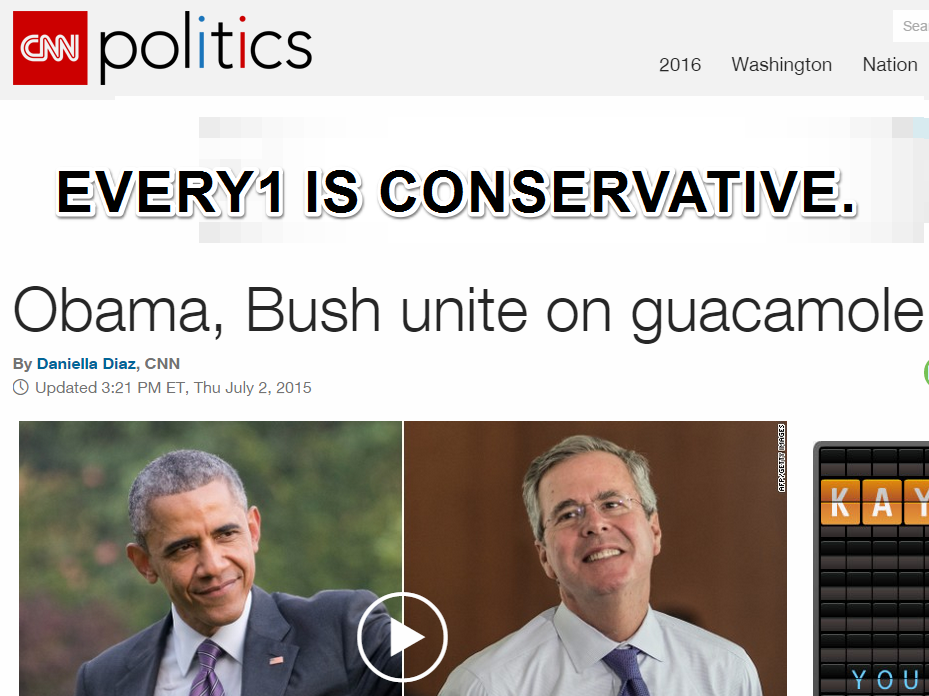 Even President Obama and Jeb Bush took a moment to brand themselves as guacamole conservatives. They too want to connect with the American Traditionalist guacamole party, clearly distancing their political and personal brands from progressive peaguac. It doesn’t pay for politicians to eat foods that would upset their voter base. Coming across as an Average American means aligning your brand with the ingestion of normal food. Do not be a palate deviant.

This emerging body of American palate traditionalists defeated this recipe. They figured out a way to identify a potential trend in peaguac and stop it by making the backlash against peaguac trend instead. The collective tongue has spoken, and the status quo is not changing. 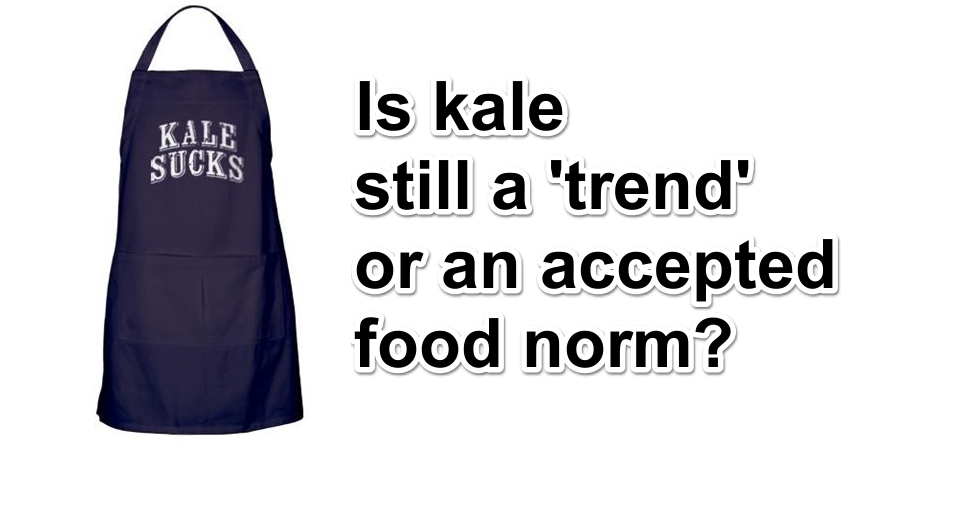 The things that we ingest define us. Perhaps even more than the content that we read and share on the internet. Food gives us the fuel to talk about the trends that invade our lives’ on the internet. Content about the things that we ingest can actually provide a lesson on the breadth of content generated and the arbitrary popularity of topics and pages from day to day. The New York Times took a risk in the American content manufacturing game by asking America to trust them on disrupting a classic American recipe. The only way this could have ever worked is if a crazy word was made up that didn’t reference the American guacamole.