Amazon Relational Database Service (RDS) and Amazon Aurora natively provide encryption at rest to protect the underlying storage of database instances, automated backups, Read Replicas, and snapshots. However, some customers may have greater data protection requirements which require encrypting data in use.

For example, encryption is required where tokenization solutions do not fit, such as when securely storing and then reading a primary account number.

In another example, customers must prevent insiders, such as database administrators, from viewing sensitive information (for example, a Social Security number or bank account number) stored in database columns.

In these encryption scenarios, you do not require executing SQL WHERE clause predicate queries over the encrypted column data. You can use client-side encryption before persisting to a SQL database to enable column level encryption.

Before I walk through the solution overview, I review a few features of AWS KMS and the AWS Encryption SDK.

AWS KMS enables you to control the use of the customer-managed CMKs needed for encryption and decryption using key policies. AWS KMS CMKs never leave KMS unencrypted and are not exportable. In addition, AWS KMS provides an audit trail of key usage in AWS CloudTrail.

The encryption flow is as follows:

The CMK is protected by AWS KMS. This encryption strategy of encrypting the data key under another key is known as envelope encryption. It should be noted that the AWS Encryption SDK simultaneously provides confidentiality, data integrity, and authenticity assurances on the data-also known as authenticated encryption.

For example, say an account number (unique value) is stored in the encryption context. Decryption is only successful when the account number is provided as an additional integrity and authentication check to ensure that the encrypted data is untampered, as shown in the following diagram. 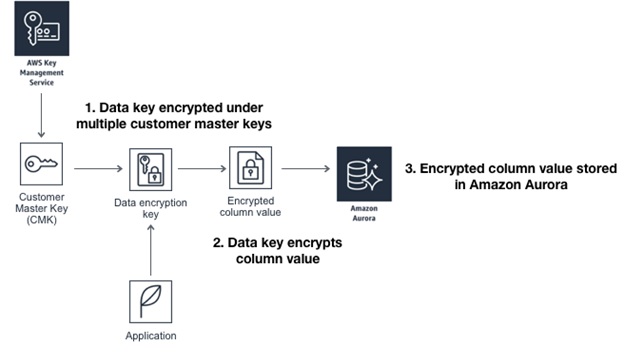 The approach is as follows:

Key management design with a multi-region database deployment must be carefully considered. Encrypted data under a single Region master key, that then propagates to a different Region, requires a cross-region AWS KMS call to decrypt the data key. This post encrypts the data key under a CMK in each Region

Each Region’s encrypted data key is stored with the encrypted data in the AWS Encryption SDK encrypted message format, thus enabling you to avoid a cross-region AWS KMS call on decrypt. In addition, it is possible to avoid incurring a decryption dependency on a single Region because the data keys are encrypted for each Region.

There are several considerations regarding space utilization, computational performance, and query restrictions that should be carefully considered before employing client-side encryption under multi-region CMKs.

In this example, AWS CloudFormation takes care of creating, configuring, and provisioning AWS Fargate and Amazon Aurora resources. AWS CloudFormation enables you to describe and manage infrastructure using code in a simple text file. Nested stacks provide dedicated templates for Fargate, Aurora, and Amazon VPC. Aurora is a purpose-built MySQL and PostgreSQL-compatible relational database built for the cloud that combines the performance and availability of traditional enterprise databases, with the simplicity and cost-effectiveness of open source databases.

The following diagram depicts the architecture and data flow of this sample application: 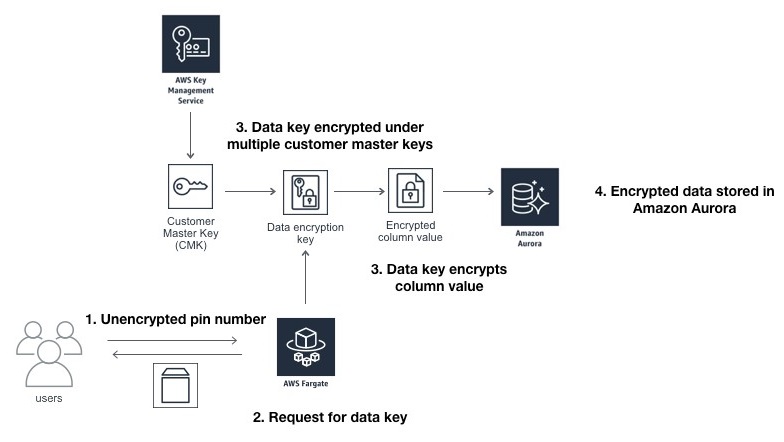 The CloudFormation and sample application is available on Github.

Before deploying the CloudFormation solution, you will need to create an AWS CodeCommit repository in the primary and secondary region in order for the AWS CodePipeline to build the Docker image. You can clone the Github repo and push to CodeCommit in each region.

Install the AWS Serverless Application Model (AWS SAM) in order to deploy the serverless application dependencies included in the example application. AWS SAM templates are an extension of AWS CloudFormation templates. Instructions for installing the AWS SAM CLI can be found here.

Also, create an AWS KMS key administrator to administer the CMK. For example, create a role named ‘KeyAdministratorRole’ with the following IAM Policy.

1.) Select two Regions, one as primary and the other as secondary.

Deploy the nested CloudFormation stack. Choose an appropriate name for the stack. Creating the AWS services may take around 30 minutes.

Use the following steps to test the sample application with client-side encryption.

In this post, I walked through how to enable client-side encryption with the AWS Encryption SDK backed by AWS Key Management Services (KMS) for Amazon Relational Database Services (RDS) and Amazon Aurora. This client-side encryption approach can provide tighter security controls when you must prevent unauthorized access to columnar plaintext. I showed how the approach supports a multi-region deployment. In addition, encryption keys are protected using AWS KMS, enabling you to have control of the keys needed for decryption (using KMS).

Josh Joy is a Security Transformation Consultant with AWS Professional Services helping to provide customers with a secure journey to AWS. Josh helps customers improve their security posture as they migrate their most sensitive workloads to AWS. Josh enjoys diving deep and working backwards in order to help customers achieve positive outcomes.