I will forever admit to being a sucker for games with pixel art, and Sunburn [$2.99] had immediate appeal to me based on that, but also thanks to its unique premise: instead of trying to save everyone, the goal is to control the jetpack-equipped astronaut captain, trying to get a bunch of stranded astronauts together, and launch into the sun so that nobody dies alone. But there's limited oxygen, so there's some planet-hopping involved, fiery asteroids to avoid, and a chain of astronauts to string along, trying to make sure they don't suffer a solitary demise while trying to get to the collective goal. This means that death is an odd thing, because dying itself might not be the ultimate goal. It's about making sure everyone suffers a quick death, rather than dying alone in the middle of space. That's a new one! It's a clever and macabre concept for a space physics puzzler, and while the game has issues, the concept alone is well worth checking out. 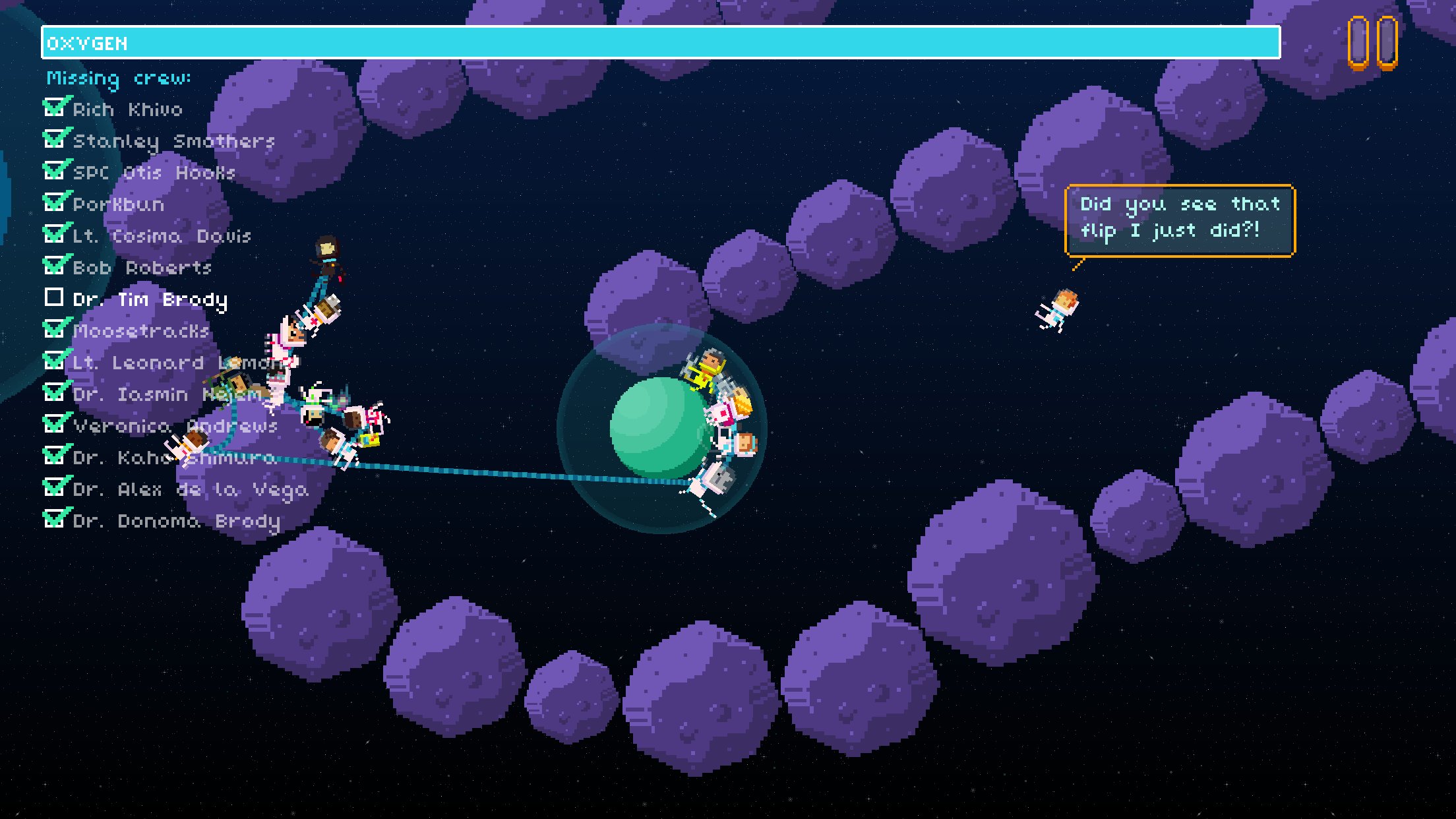 The controls are based around a two-thumb scheme, where tapping and holding on either side of the screen will rotate in that direction, and tapping both at once will jump, or use some oxygen to propel forward when floating in space. The controls feel a little sensitive to the point that I've had some odd jumps and propulsions when I didn't intend to do so, and really, any control system that uses a "tap both buttons at once to operate this function" will have some imperfections, but they're just a part of the game. It is possible to zoom out by pinching with two fingers in the middle of the screen, though it will snap back to the default view once letting go.

The controls' imperfections thankfully aren't all that annoying, since most levels are short, and restarting is quick enough, so it's hard to get too frustrated. The physics system operates in a rather consistent manner too, where it feels like doing the same thing in the same way will get the same results. The interface buttons for restarting feel a bit small, but that feels like it's part of the game's large canvas. It's a pixel art game, and the characters are all relatively small, but on a retina iPad, the backgrounds look impressive with all the tiny stars, and the characters cavort a fine line between charming pixel blockiness, and having plenty of detail. 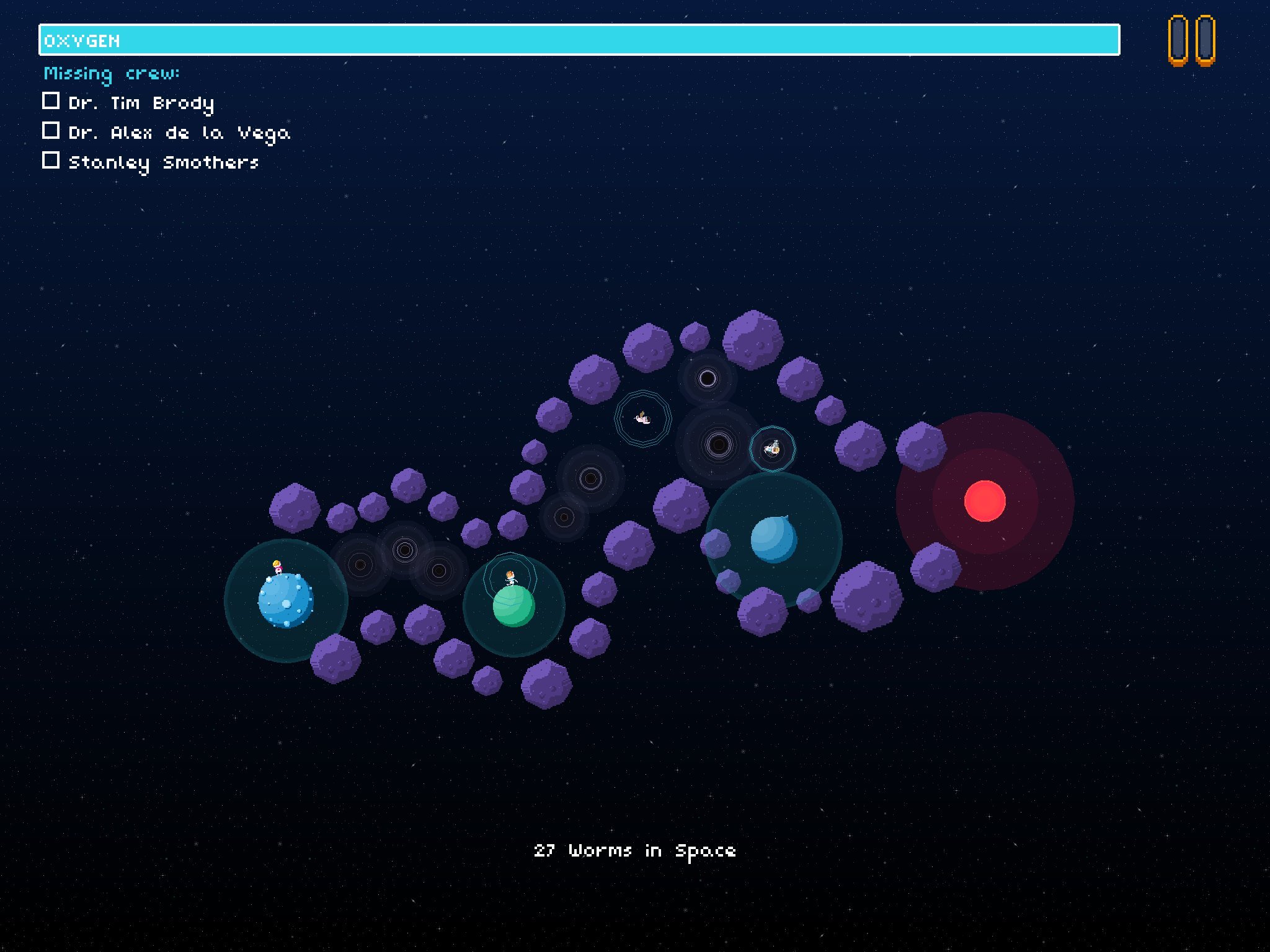 I do wish there was iCloud support to carry progress between devices, in part because going to later levels is a lot easier on the iPad with its large level select screen. On iPhone, it shows 5 levels at a time, and since the start button only starts from the beginning of the game, and not from the most recent uncompleted level, this means there's a lot of scrolling through menus to do in order to get to the latest level. So yes, there's still some tweaks that could be done to this one.

I am absolutely in love with Sunburn's concept. It's dark, sure, since the game is ultimately about a group suicide pact. But it's got a sense of levity and humor about it, and it's ultimately uplifting in a weird sort of way. The thing that's scary about space is drifting off and dying alone, no? Heck, even loneliness is a dangerous part of the human condition. This is a game about, in the bleakest of circumstances, fighting the odds to come together and at least make sure no one suffers the bleakness of a slow, painful death in outer space. 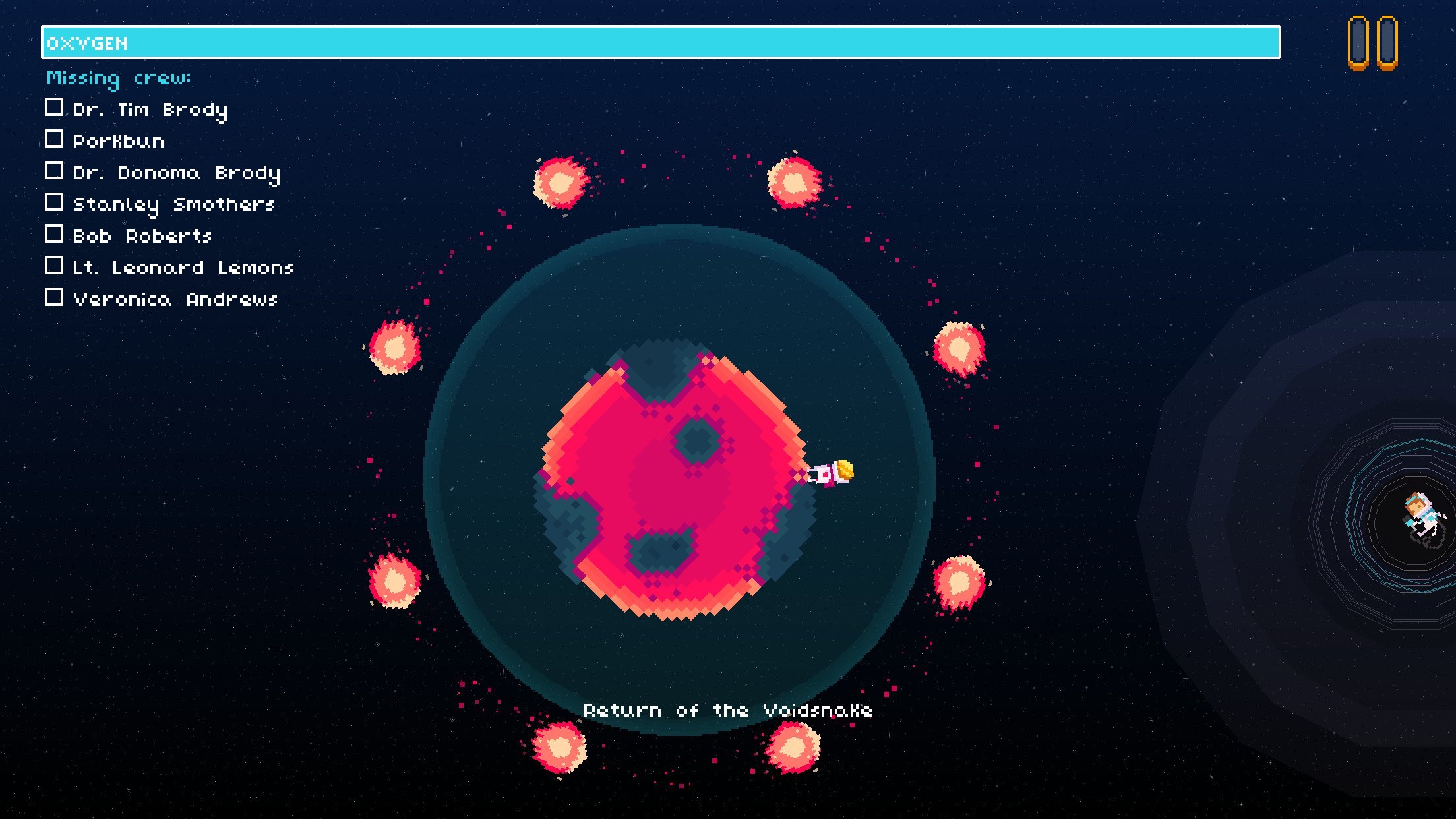 So while perhaps it's frustrating that one person can die before others and still have the level fail, I suppose it makes sense in the overall theme of the game that everyone's gonna go together. At least, together within reason, there is some leeway: I had a long chain of survivors, where one got hit by a passing flaming meteor as I was on my way into the sun, and I was able to get the others in before the approximately-five-seconds leeway time ended. However, I did also have a circumstance where I ran out of oxygen right as the chain was flying into the sun, and the survivors eventually drifted into the sun...but after the leeway time. So it's not a perfect system.

As well, the level progression is very odd, in that there's no real curve or progression. For example, level 51 is kind of challenging...then 52, 53, and 54 are simple. And level 55 is really challenging. The difficulty curve is a rollercoaster, where some levels can be beaten in one or two shots, and others require absolute perfection in order to beat. The levels with many survivors to rescue tend to be the ones that fall on the "really difficult" side of the scale.

Still, Sunburn's flaws are more minor issues, albeit ones that add up. It's an imperfect game, but it's one that does a magnificent job overall at straddling a difficult line between its bleak and macabre objective, while being charming and a little humorous. And there's immense satisfaction to be had from navigating the treacherous reaches of space to save a whole lot of astronauts, and then watch as they all go into the sun consecutively. Sure, I just doomed them all to their deaths...but at least they all became ghosts simultaneously. So maybe it's appropriate that this game has so many imperfections: this game is about making the best of imperfect circumstances, and this game makes the most of itself despite some little flaws. I also eagerly await what the developer, Secret Crush, has next up their sleeves.

LaptrinhX
—
'Sunburn!' Review - Does it Feel Really Good to Die?
Share this