In the TV show Game of Throws, there is a common warning - Winter is Coming. It refers to an impending war and attack of Zombies.

There has been steady stream of articles and studies that to detail concerns about automation and in particular artificial intelligence enhanced automation devastating entire categories of work.

The warnings of mass unemployment are a warning that a job winter is coming.

People (characters) in Game of Thrones can be killed in the many wars and power struggles well before the Zombie attack. 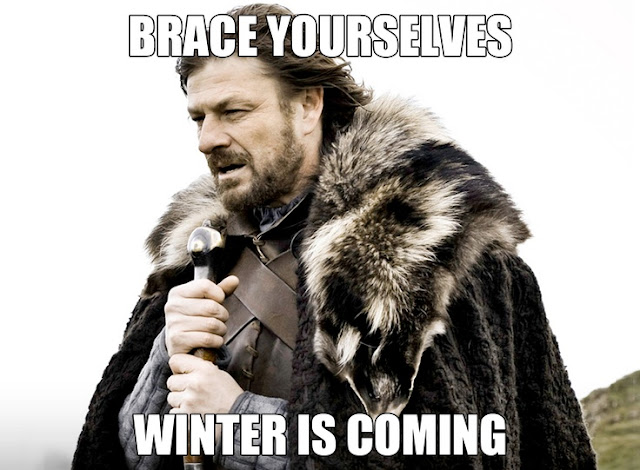 Similarly people can lose their job or career for more mundane reasons than AI job apocalypse.
- the company they work at goes bankrupt or has a series of mass layoffs
- the job could be outsourced to another country
- new graduates will to accept lower pay are hired to replace current staff
- a regular economic crisis or recession hits
- regional or local problems cause higher unemployment
- job cuts need not be total, there could be a sharp drop in the compensation

Some articles talk about AI-proof jobs. However, some of the recommendations are for middle management jobs which could be replaced through regular corporate restructuring. IT work could in general be stable but the particular products and tools that make you valuable could become cloud based and need fewer people and provide fewer lower paying jobs.

Preparations for a job winter are similar to the steps in positioning and contingencies for economic recession or regular unemployment risks. People who are really worried about a job winter should start thinking more like the Depression era generation.

Try to create a larger cash emergency fund. Not just 3 months but 3 years.
Debts are constant expenses and payments even if you lose your job or income.

The dependency rate is the percentage of your monthly income that goes to your regular expenses.

Increasing savings and income involves getting side work or making investments that increase regular income.

Keep a tight financial budget and where you have a portfolio of investments look at investments that would perform better in an AI ascendant scenario.

At the very least hold investments that will not drop if the company or career that you are in performs badly.

If your company or job sector is hit would that mean that all people in the same real estate location would lose their jobs too ? This would mean the value of real estate near the location of your office could also be negatively impacted.

Update your resume and Network. It can take many months to get a new job search in gear.

Make preparations regarding an alternative career. This could involve having a side job or business.

Online education or other long term preparations should be considered.