There is no write lock for other threads,

There is no write request or write request, but the calling thread and the thread holding the lock are the same.

Prerequisites for a thread to enter a write lock:

No read lock for other threads

No write lock for other threads

There are three important characteristics of read-write lock

Let's first look at the overall structure of the ReentrantReadWriteLock class:

ReentrantReadWriteLock has five inner classes, which are also related to each other. The relationships of the inner classes are shown in the following figure.

Note: HoldCounter mainly has two properties, count and tid. Count represents the number of times a read thread has been re entered, and tid represents the value of the TID field of the thread. This field can be used to uniquely identify a thread. The source code of ThreadLocalHoldCounter is as follows

Note: the local thread counter and AQS state are set in the Sync constructor.

The design of reading and writing state

In the implementation of reentry lock, synchronization state means the number of times repeatedly acquired by the same thread, that is, a shaping variable to maintain, but the previous representation only means whether to lock, without distinguishing between read lock and write lock. The read-write lock needs to maintain the state of multiple read threads and one write thread in the synchronous state (a plastic variable).

The realization of the read-write lock for the synchronous state is to cut the variable into two parts through "bit by bit" on a shaping variable, the high 16 bits represent read and the low 16 bits represent write.

Assuming the current synchronization status value is S, the operations of get and set are as follows:

Acquisition and release of write lock

You can see that it is the acquisition and release of exclusive synchronization state of the call, so the real implementation is tryAcquire and tryRelease of Sync.

For the acquisition of write lock, see tryAcquire:

The exclusiveCount method indicates the number of threads occupying the write lock. The source code is as follows:

Note: directly perform and operation on state and (2 ^ 16 - 1), which is equivalent to 2 ^ 16 on state module. The number of write locks is represented by the lower 16 bits of state.

As can be seen from the source code, the steps to obtain the write lock are as follows:

(1) First, obtain c and w. c indicates the current lock status; w indicates the number of write threads. Then determine whether the synchronization state is 0. If state!=0, other threads have acquired read lock or write lock, execute (2); otherwise, execute (5).

(4) If the state is 0, neither the read lock nor the write lock is acquired. Judge whether blocking is needed (the fair and the unfair methods are different). Under the unfair strategy, it will always not be blocked. Under the fair strategy, it will be judged (judge whether there are threads with longer waiting time in the synchronization queue, if there is one, it needs to be blocked, otherwise, it does not need to be blocked). If not, it needs to be blocked To block, CAS updates the synchronization status. If CAS succeeds, it returns true. If CAS fails, it means the lock has been robbed by another thread, and it returns false. False if blocking is required.

The method flow chart is as follows: 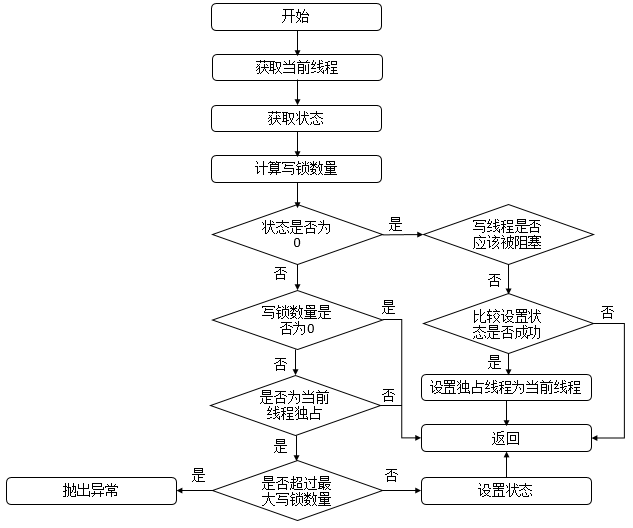 Note: this method is used to release write lock resources. First, it will determine whether the thread is exclusive. If it is not exclusive, an exception will be thrown. Otherwise, the number of write locks after releasing resources will be calculated. If it is 0, it means that the resources are released successfully and will not be occupied. Otherwise, the resources will be occupied. The method flow chart is as follows. 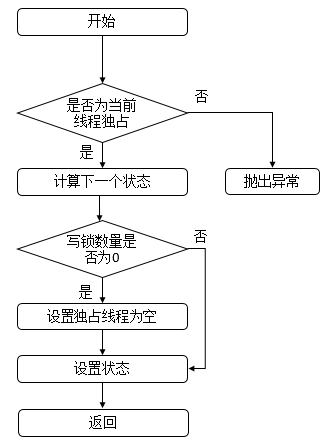 Acquisition and release of read lock

Similar to write lock, the actual implementation of lock and unlock of read lock corresponds to tryAcquireShared and tryreleased shared methods of Sync.

To obtain the read lock, see the tryAcquireShared method

The sharedCount method indicates the number of threads occupying the read lock. The source code is as follows:

Note: after the update is successful, the current thread reentry number (23 lines to 43 lines of code) will be recorded in the first readerholdcount or this thread copy of readHolds(ThreadLocal type). This is to implement the getReadHoldCount() method added in jdk1.6. This method can obtain the current thread reentry number of shared locks (the total reentry number of multiple threads is recorded in the state). Add This method makes the code more complicated, but its principle is very simple: if there is only one thread at present, you don't need to use ThreadLocal to directly store the reentry number in the member variable firstReaderHoldCount. When there is a second thread coming, you need to use the ThreadLocal variable readHolds. Each thread has its own copy to save itself Of. 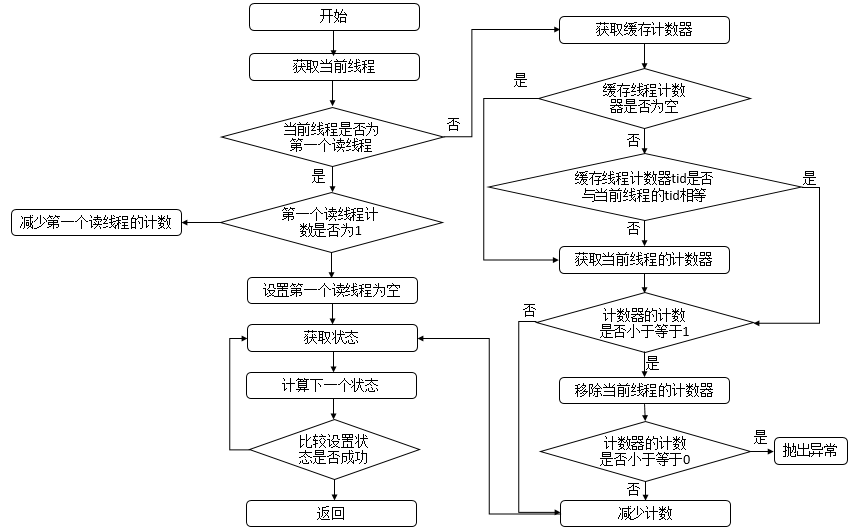 These two variables are relatively simple. One represents a thread. Of course, this thread is a special thread. The other is the reentry count of firstReader.

In HoldCounter, there are only two variables: count and tid. Count represents the counter and tid is the id of the thread. But if you want to bind an object to a thread, it's not enough to only record TID, and HoldCounter can't play the role of binding object at all, just record thread TID.

Indeed, in java, we know that if we want to bind a thread and an object together, only ThreadLocal can implement it. So as follows:

Therefore, HoldCounter should be a counter on the binding thread, and threadlocalholdcounter is ThreadLocal bound by the thread. From the above we can see that ThreadLocal binds HoldCounter to the current thread, and HoldCounter also holds the thread ID, so that when the lock is released, we can know whether the last cached HoldCounter in ReadWriteLock is the current thread. The advantage of this is that you can reduce the number of ThreadLocal.get(), which is also a time-consuming operation. It should be noted that the reason why HoldCounter binds thread ID instead of thread object is to avoid that HoldCounter and ThreadLocal are bound to each other and it is difficult for GC to release them (although GC can intelligently discover such references and recycle them, but this requires a certain price). In fact, this is just to help GC recycle objects quickly.

Through the above source code analysis, we can find a phenomenon: