No doubt, there is renewed optimism. From crypto commentators calling out bottoms to scheduled development objectives, lights are defiantly bright for crypto assets. Remember, it was not until last year when the XRP—ETH flip happened.

Because of tight margins, XRP market cap at $$13,293 million versus ETH at $12,502 million, a possible flip is on the cards. The gap is about $700 million and a 10 percent expansion of the former is enough to effect changes in ranking.

In other news, it is increasingly becoming clear that Ripple’s objective is attainable. At first it seemed impossible but processors as well as banks as Exim are seeing the benefits of joining this SWIFT alternative that is fast, secure and transparent.

RippleNet remains a public ledger but the icing should be solutions as xRapid which bring about instantaneous settlement with near zero costs. The more the banks, the more demand. At the time of writing, 13 banks are making use of the network, up from three at time of xRapid unveiling.

The community may be enthused but XRP is yet to substantially follow through. At spot prices, XRP is down 1.3 percent and in sync with Jan 10 losses.

Nonetheless, we expect bulls to stay and top. The only way that will print out is if sell momentum wane allowing bulls to band up over time and reverse losses of Jan 10 at the back of strong volumes. Ideally, these trade volumes should exceed 83 million as registered on Jan 10. 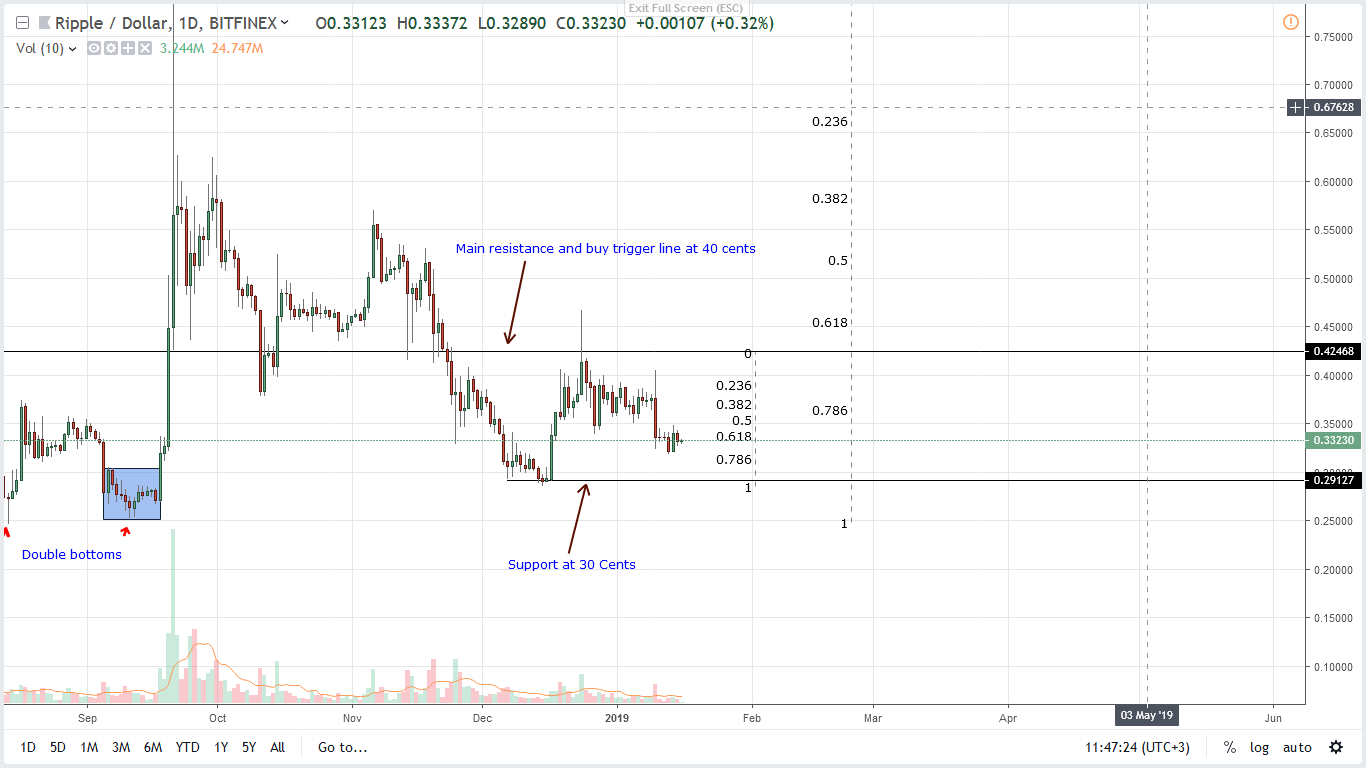 Evidently—as per BitFinex data streams, XRP is in range mode, moving horizontally inside Sep 2018 high low. It is now three months and as long as sellers are trading above 25 cents or Sep 2018 lows, bulls have a chance. Regardless, even if we are optimistic, the correction is nonetheless deep in both the short and long term.

Note that XRP prices are down more than 95 percent from Sep 2018 highs and down exactly 78.6 percent from Dec 2018 highs. The fact that prices found support from this pivotal Fibonacci retracement level complete with a double bar bull reversal pattern a few cents away from 30 cents mean there are high chances that XRP will rally to around 40 cents in the near term. Such projections should pan out as Fibonacci retracement rules dictate.

Ideally, we would like to see a surge in trade volumes indicative of underlying demand or supply–depending on breakout. However, that is not the case and so far, our reference bar is Jan 10—83 million versus 30 million.

If bulls are in charge then we need to see sharp price reversals above 38 cents and 40 cents—the 61.8 percent Fibonacci retracement level. These volumes should not only exceed recent averages of 33 million but surpass 83 million and even 123 million—those of Dec 24.

All Charts courtesy of Trading View–BitFinex

This is not Financial/Investment Advice. Do your research.