PC players who have pre-loaded Cyberpunk 2077 and all necessary patches, if you’re playing with GeForce hardware, there’s just one more thing you’ll want to have before you’re ready to go.

Ahead of Cyberpunk 2077‘s launch, Nvidia has released the latest GeForce game ready driver. The latest driver features all the necessary optimizations that will ensure your time in Night City is running smooth as it can.

For those playing with ray-tracing enabled, the new driver most importantly adds DLSS support to Cyberpunk, which boosts frame rates while delivering a crisper image quality. Even with ray-tracing at max settings, DLSS should still be able to increase the game’s frame rates by up to 60% or more, depending on your GPU and resolution.

Cyberpunk isn’t the only title getting support from this updated driver. Yesterday, Minecraft RTX moved out of beta to become an official release on Windows 10, bringing ray-tracing to the blocky world. It’s also supported with DLSS on the new game ready driver, which will be able to double your frame rate. 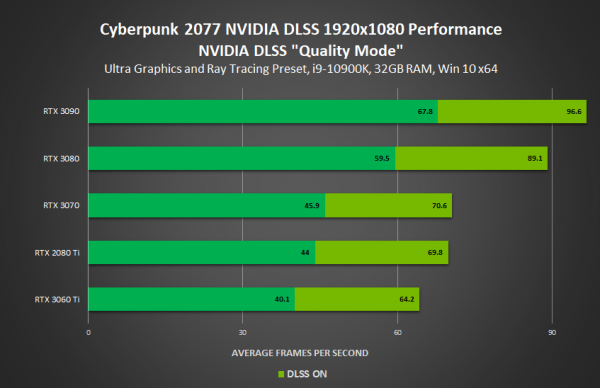 There’s no word yet on when we might see this game-changing technology arrive on next-gen consoles. Nonetheless, at launch, it appears that Cyberpunk 2077 has performance options on Xbox Series X, but not on PS5. Xbox users who swap their region settings have also been able to jump ahead of other platforms in playing the sci-fi RPG a day early.

Meanwhile, a hidden message in the Cyberpunk launch trailer confirms expansion plans while free DLC is due to arrive in early 2021. You’ll also be able to claim additional digital goodies and in-game items by connecting your game purchase to GOG Galaxy.