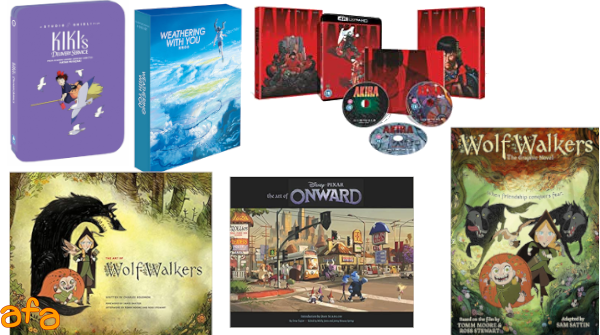 2020 has been a year none of us are likely to forget in a hurry. But it is coming to a close, and that means we are approaching the festive season- and that means.... presents! Whether you are looking for the perfect gift for an animation loving loved one, or for things to stick on your Christmas list, AFA has handpicked some of the best you can find! (And what's more, if you buy anything through the links below, you will also be gifting a gift to your fave animation site *cough*). These items should also be available via your favourite independent retailer of choice. Please check release dates to avoid disappointment- some are released closer to Christmas.

The Art Of Wolfwalkers

Tomm Moore and Ross Stewart's new film Wolfwalkers arrives on Apple TV+ this month, and as with any Cartoon Saloon film, it's frickin' gorgeous. The book features behind the scenes materials such as sketches, paintings and digital renders as well as interviews and insight. It's the best looking film from the studio so far, so that makes this book an absolute must for any fan of the film.

This comic book adaptation of the film from Sam Sattin recreates the visuals of the film with style. Produced alongside the film itself, it features some material that was ultimately cut from the finished movie. It also features a special introduction written and illustrated by Tomm Moore and co-Art Director, Maria Pareja.

The Art Of Onward

Pixar 'Art Of' books are always going to be worth having, but with Onward, director Dan Scanlon and his team created a whole, richly drawn urban fantasy world. That makes this particular book, complete with all the production materials, storyboards, artwork and behind-the-scenes tidbits you would expect from any good Artbook, a perfect addition to any Pixar fan's collection.

The memoir of legendary voice actor Rob Paulsen (Yakko Warner, Pinky, Raphael and hundreds more) recounts his story of fighting throat cancer and how his career helped him. It's best put in the subtitle "how a couple of ninja turtles, Pinky and an Animaniac saved my life." A must-read for any listener of Rob's popular podcast Talking Toons.

Katsuhiro Otomo's iconic ground-breaking classic has graced virtually every format known to man- it was even released on UMD format for PSP! It was only a matter of time that the film would come to 4K, but it arrives perhaps not uncoincidentally just in time for you to enjoy on your shiny new PlayStation 5 (should you be so lucky). The brand new restoration is apparently the best Akira has ever looked, so collectors are sure to want to have this in their 4K collection. It also comes with the Blu-Ray, so even if you've yet to get yourself a 4K set-up you can make sure your own the best version for when you do.

Makoto Shinkai followed up his record-breaking hit Your Name with another fantasy-tinged teen romance, this time with a climate-change angle. And if anything, it's even more beautifully animated, and full of the feels, so a great gift for any anime fan. Weathering With You is available on Blu-Ray, DVD and even in a luxurious special edition including the film on 4K and CD soundtrack.

Children Of The Sea

It's a shame that the pandemic nixed the planned cinema release for Studio 4°C's gorgeous fantasy because Children Of The Sea would have been quite something on the big screen. Even on the small screen, it's beautiful to behold with some of the best looking 2D animation seen this year.

For anybody who has yet to own a copy of their favourite Studio Ghibli classic, then these new limited-edition releases from GKIDS Films and Shout Factory are perfect. The contents are exactly the same as the standard Blu-Ray/Combo packs already available (so there's no sacrificing special features) but they are now housed in fancy steelbook packaging with brand new artwork and a brand new exclusive booklet, making them feel like real collector's items.

To be honest, this is a bit pricey for what it is, especially if you're not interested in the exclusive Funko Pop collectable BUT the collection of 60 restored classic theatrical shorts contained on these Blu-Rays include some of the absolute best ever made. Around half of which have never been released on home video before. There's also a host of bonus features and 10 brand new Looney Tunes Cartoons. Pretty hard to resist for any fan of classic cartoons.

For a break from both Hollywood CG studios and anime, try this high-end CG fantasy from up-and-coming Chinese studio Light-Chaser Animation. This fantasy is based on a well known Chinese myth but is actually a prequel to the story told by other films. Gorgeous animation and a combination of the supernatural, romance and Wuxia style martial-arts makes White Snake a refreshing watch for even the most jaded viewer.