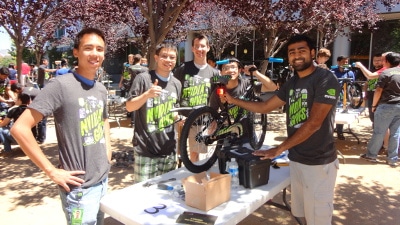 Ask kids what they want most, however, and the answer is almost always the same. They want bicycles, Robyn Bartkowski, a program manager with TurningWheels For Kids, a non-profit that distributes bikes to low-income kids in the San Francisco Bay Area, told a group of NVIDIA interns gathered at our Santa Clara campus Thursday.

“A bike can change the trajectory of a young person’s life,” Bartkowski said.

So, 80 members of our latest crop of interns got to work, cracking open boxes and building 20 bikes for local children with the help of a team of volunteers from TurningWheels. Giving is a big part of NVIDIA’s culture. So involving interns in giving is an important part of exposing them to life at NVIDIA.

The interns quickly divided up into groups of five to unbox the green and black bikes. Armed with wrenches and screwdrivers, volunteers like Innfarn Yoo, a PhD candidate in computer graphics at Purdue University, and Bill Zorn, who holds a degree in computer science at Carnegie Mellon, had no problem bolting together the bikes.

After they were done Aron Casaday, a professional mechanic and a regular TurningWheels volunteer mounted each bike on a metal stand and checked to be sure the wheels were properly inflated, the seats were mounted correctly, and all the bolts were tightened as a group of local children gathered to watch.

Ayla, 8, could hardly wait to jump on her new bike. She wriggled with anticipation in the courtyard of NVIDIA’s Santa Clara campus as she watched her bike being assembled.

“She’ll ride it at the park,” her mother, Isabel, said.

“… and to school,” Ayla added, putting on a brand new black bicycle helmet.

“There’s nothing like the freedom that you feel when the wind is hitting you,” said Isabel, who brought five of her kids to the event. “These are their bikes now.”

While the bikes represent freedom and fun to the children lined up for their new rides, Bartkowski explained that bikes also have huge health benefits.

Pediatricians will even prescribe bikes for kids who are overweight, Bartkowski explained, as part of a program TurningWheels runs that pairs overweight kids with bikes. An astounding 100% of the kids in the program lower their body-mass index.

Not that kids are worried about stuff like that. Less than an hour after the volunteers began building, the finished bikes were lined up and paired with their new owners, like Brandon, who couldn’t wait to take his new BMX style bike for a spin, pedaling away across the campus quad.

We think he likes it.