We make it a point to add a big Land Rover to the Four Seasons fleet every decade or so. Back in 1996, we welcomed the new-to-the-U.S. Discovery, which proved to be an exceptionally capable—and rather troublesome—vehicle. Then in 2005 we hosted a 2006 LR3 (the Discovery by any other name) that we loved in nearly every way, but the weak low-end torque from its V-8 had us eyeing the European-market Land Rover Discovery diesel with envy. And although it wasn’t the quality-control nightmare the ’96 Disco was, the LR3 had its glitches as well.

“Continue to improve quality, put the LR3 on a diet, and offer a torquier, more fuel-efficient engine,” we opined at the conclusion of our test. “Then the LR3 will be one of the best SUVs on the market.”

When Land Rover reintroduced the Discovery under its proper name in 2017, it was as if our wishes had been granted. Thanks in large part to its new aluminum body, the Disco was some 875 pounds lighter than the 2006 LR3, and its optional 3.0-liter turbodiesel V-6 produced 443 lb-ft of torque versus the old V-8’s 315. We were also interested to see how well the new Disco would dance with us from a quality and reliability standpoint during a year of heavy use.

The 2017 Land Rover Discovery Td6 first landed at our Detroit office, where the big seven-seater proved an instant hit. Editors praised it for its attractive, high-quality interior, which wasn’t surprising given it was a loaded HSE Luxury model. For its $66,945 base price, the seating was swathed in Windsor leather, a massive panoramic glass roof opened up the cabin, and an 825-watt Meridian sound system kicked out the jams. Options included a rear-seat entertainment system, a safety suite with adaptive cruise and all manner of nannies, a terrain system with an active locking differential, and its Namib Orange metallic paint. All in, the damage came to $79,950.

Out on the mean streets, the Discovery drew near universal acclaim for its comfortable and composed ride. “For as tall and bulky as it looks, the Disco handles daily driving duties well,” editor-in-chief Mike Floyd said. “Yeah, it’s going to roll a bit into corners, but that’s to be expected. It’s quick for its size, devours road imperfections, and is quiet in the cabin at speed.”

Passengers also found little to complain about. During a trip from Detroit to Milwaukee and back, the three people spread across the second row reported no issues, and they lauded the nine USB ports arranged about the cabin. Still, not everyone loved everything about the ergonomics, namely your humble author. I was never able to find a comfortable spot to rest my left elbow.

Given its copious dimensions, the shiny orange Land Rover often doubled as the office pickup, hauling dogs, gear to cabins, spare tires, etc. But contributor Marc Noordeloos had trouble carrying an 81-inch-long box, which fit easily into his Volvo V60. The problem, he discovered, was the Rover’s inner tailgate, which motors down to form a weight-bearing load floor (and, as we later learned, is very expensive to replace when it breaks). “It takes up more space than you think,” he said.

We also made sure to get the Disco a little muddy. It proved a master of all types of terrain, thanks in part to its height-adjustable air suspension, which gives the Land Rover all the ground clearance it needs but only when it’s needed. As an added bonus, the suspension automatically drops to its lowest height when the Disco is parked, a feature much appreciated by the more vertically challenged members of our staff.

When it came to hauling trailers with the Discovery (which has a 7,700-plus-pound towing capacity and a seven-pin wiring harness), no one experienced any issues of note, and the extra torque the diesel engine offered proved welcome. Eric Schwab, our VP of sales, used the Discovery as his getaway car for Labor Day weekend. “Tows a hell of a lot better than my Jeep,” he said. Yours truly towed an Airstream Basecamp travel trailer deep into Death Valley, and it wasn’t until I hit the steepest grades of the Panamint Range that the Disco began to feel like it had 2,600 pounds of Airstream on its hitch. 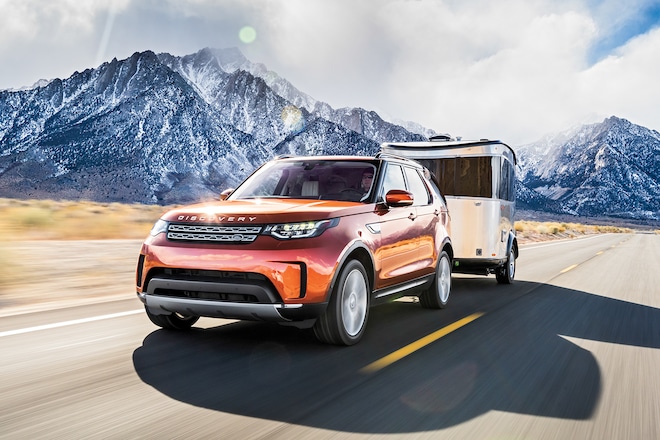 Then there was the epic trip senior editor Nelson Ireson embarked on from Detroit, to his former home in Arkansas, then on to our California HQ, with some unplanned hairiness baked in.

“The first 900 or so miles between Detroit and Little Rock were completely contained, and the long range of the diesel Disco’s tank made for easy cruising,” he said. “But due to a co-worker’s mix-up, the three-season original equipment tires I had carried with me and had installed at the Little Rock Land Rover dealership were not in fact the said three-season tires but rather high-performance summer tires—for a Dodge Hellcat. The theoretically sticky rubber was a nonissue across the rest of Arkansas, Texas, and New Mexico, but come the high mountain passes in Arizona, I was slip-sliding in four-wheel drifts. That’s good fun, or can be, when you’re not towing a U-Haul trailer and white-knuckling between jackknifed semis. But even with all the drama, the Discovery proved to be a great road tripper from a moving-things-here-to-there perspective. It took me about a week to work out all the kinks that seat and seating position put in my back, though.”

Despite the kudos for its towing acumen and long-distance hauling, editors reported some off-the-line issues with the Td6. “My biggest beef is with its slow, clumsy tip-in,” Detroit bureau chief Todd Lassa said. “It’s pronounced enough for me to lose confidence blending into traffic. I feel like I have to wait for bigger gaps than usual.” Noordeloos was a bit more generous: “There’s a bit of throttle lag from a dead stop, but that’s been the case with other diesel SUVs I’ve lived with.”

Over its 24,000-mile tenure with us, the diesel Discovery averaged just north of 22 mpg, a little shy of the 23 mpg EPA combined number but a darn sight better than our ’06 LR3, which averaged a paltry 15 mpg.

Did we save money? Probably not. First and foremost is the diesel’s $2,000 price premium over the gas-powered model. Then there’s the fact that diesel fuel is more expensive than gasoline in most states, though the petrol-powered Disco’s premium fuel requirement narrows the gap. But the greatest cost was one that blindsided us: Diesel exhaust fluid (DEF), which must be replenished to keep the Td6 engine’s emissions system working.

When the Disco first started to run low on DEF, we brought it to Suburban Land Rover in Troy, Michigan. They charged us a ridiculous $269.95 for a 3.7-gallon refill, including $160 for labor (to open and pour a few bottles). When we had the Disco’s oil changed at 17,985 miles, Owens Murphy Land Rover of Little Rock, Arkansas, topped off the DEF tank, this time charging us $57.

The next time the Discovery signaled it was low on fluid, we decided to DIY our DEF, paying 16 bucks for a 2.5-gallon bottle. A week or so later, the Disco’s dash lit up with a message that the DEF quality was incorrect and the engine would be disabled in 260 miles. We rushed to Land Rover South Bay in Redondo Beach, California, and found there was a technical service bulletin (TSB) with a software update to address the problem of false and/or early DEF warnings. Even so, we were advised to stick with dealer-supplied DEF. We were skeptical (and remain so; from what we understand, DEF is DEF), but we decided not to take any chances. After the Death Valley towing trip (working the engine hard seems to increase DEF consumption), the Disco asked for more fluid, and we went back to Land Rover South Bay, who charged us $165 for a 4.5-gallon fill-up. (The price to do the same using DEF from Pep Boys? $25.98 plus tax.)

The DEF experience served as a reminder that expensive European cars aren’t just expensive to buy; they can be expensive to maintain. Our sole oil change: $173. New fuel filter: $190. And when the hinges broke on the inner tailgate (which admittedly was our fault), replacing it cost a whopping $850. All in all, we spent some $1,760 in maintenance, DEF fluid, and other repairs, and that’s not counting the warranty work or the snow tires we swapped on (and later off) after the Disco’s Detroit-Arkansas-California trip. 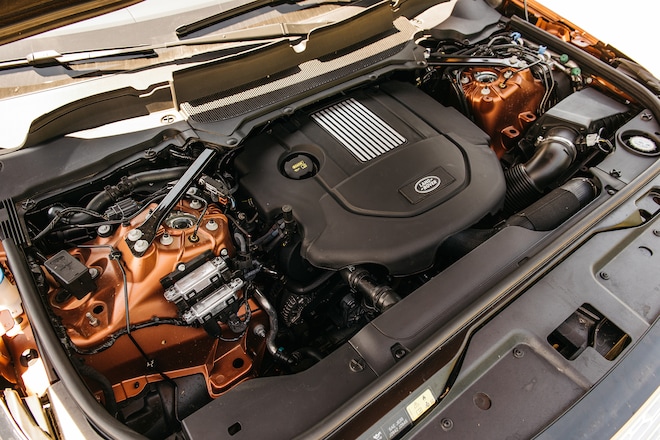 As for build quality, early on the rubber trim around the A-pillar came loose; this turned out to be the subject of a TSB. Then we noticed that one of the Disco’s rear windows wasn’t tinted to match the others, which is the type of quality bugaboo that should never happen—let alone on a vehicle that stickered at almost 80 grand (the correct glass was swapped in under warranty). We logged a couple of incidents where the engine would stumble or the transmission would hunt between fourth and fifth gear. No TSB was ever issued for this one, but we had the ECU flashed at the dealer with the latest software, and the problem never recurred. The Discovery’s touchscreen infotainment system was also singled out. Several staffers found it laggy and difficult to use and reported it occasionally locking up. There were also a handful of recalls, all dealt with during our other service stops.

So it wasn’t entirely trouble-free, and the diesel engine we so deeply desired proved a mixed blessing. Even so, the Land Rover Discovery turned out to be one of the most well-liked Four Seasons vehicles in recent memory, and we were genuinely sad to see it go. Back in ’06 we predicted that a lighter, more fuel-efficient, and better-built LR3 would be one of the best SUVs on the market. From our perspective, at least, the new Land Rover Discovery has turned out to be (mostly) just that.