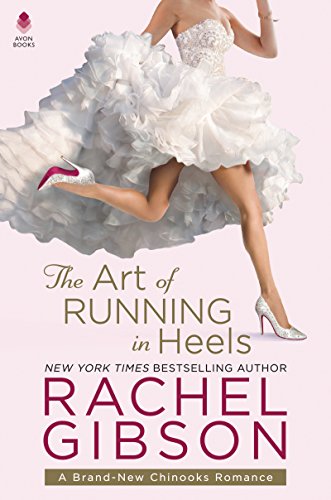 The Art of Running in Heels

I’ve been trying to branch out in my reading this year, and so despite not being a sports person I read The Art of Running in Heels by Rachel Gibson. For the most part I enjoyed it, but I couldn’t get past all the sexist and homophobic comments, especially those uttered by the heroine’s father (who is also the hero’s hockey coach). Trigger warning for quotes in this review that include misogynist, homophobic language.

Here’s the story. Seattle Chinooks’ hockey star Sean Knox gets into a small plane that is supposed to take him fishing. The plane is waiting for one other passenger, Lexie Kowalsky. She arrives in a massive wedding dress, high heels and veil but with no money or phone. Sean enjoys helping her out of her dress and loaning her a shirt, but as soon as he realizes that Lexie is his coach’s daughter he decides that she is off-limits, and he also manages to avoid mentioning to her that he plays for her dad’s hockey team.

Lexie arrives in full bridal attire because she’s running away from her wedding. Lexie was on a reality show called Gettin’ Hitched which is basically The Bachelor but with a ‘country’ theme. She meant to just do a couple of episodes and then get herself voted off. This would allow her to promote her new business of “haute couture” for dogs. However, Lexie is incredibly competitive and she got caught up in the contest aspect of the show. By the time she came back to her senses she was in a wedding dress at church. With the help of a friend with a car and a friend with a plane (the one mentioned above) she heads to the tiny fishing town of Sandspit, Canada, to lay low for a while. While in Sandspit, Lexie and Sean hit it off, which has repercussions when they return to Seattle.

I enjoyed the way this book made me care about and sympathize with Lexie, a person with whom I have nothing in common with other than the fact that we both like dogs. The writing made it seem perfectly plausible that she would appear on the show (Bachelor fans, this is where we say, “FOR THE WRONG REASONS!”) and forget to lose. It’s hard for me to get past the fact that that she calls her dog “Yum Yum,” but I forgive her because she gives Sean’s hypochondriac mother a three-legged rescue dog which plays out both hilariously and beautifully.

I admired the way Sean steps up to help Lexie with her many problems that arise from her participation in Gettin’ Hitched and her decision to run away from the wedding. However, he has some emotional swerves that confused me. He is very sweet to Lexie, says wonderful things about her, helps her with the show, and basically gives her every indication that he has feelings for her, which makes it stunningly hurtful when he says that he doesn’t and that she should be “better than the women who get mad and act this way.” Then he has another emotional flip-flop and decides that he loves Lexie after all and rushes off into her arms. I did not believe his revelation, I did not believe in his grand gesture, and I did not believe that Lexie would or should take him back.

The book is funny and when Sean isn’t being a jerk he and Lexie have a nice, easy camaraderie. I loved Lexie’s memos to herself and to Sean, and the way Sean improvs off of them. This book is the seventh book in a series and the only thing I thought I might have missed from the earlier books was a better idea of who Sean’s teammates are. There’s a cute scene of all the guys on a plane between games that gives a sense of them as people who travel together way too often and who might not be friends but who know each other very well.

Here’s what upset me: the book is full of homophobic and sexist slurs. According to Lexie’s dad, John, any man who is annoying is, in some way, like a girl, which is implied to be the worst thing a person who is not actually a girl could possibly be. John uses words like “sissy” and “nancy-boy” to describe men with long hair, men who care about hair, and men who don’t hit hockey pucks hard enough. It’s trash talk, but trash talk that is steeped in toxic masculinity. Here’s John commenting on a hockey game that he’s watching on TV:

“For shit’s sake. Hit that son of a bitch. What’s wrong with these young guys?…They’re more concerned with their flow than putting points on the board…All that hair product has shrunk their balls and now they shoot like girls….God, what a sissy.”

This isn’t cute! John is not a loveable curmudgeon! This is ugly, this is not adorable, and it does significant, actual harm to people! Why are we acting like it’s cute? John isn’t any more adorable than a racist uncle, whether he has “a big heart” or not.

Meanwhile, Sean has his own issues with toxic masculinity. He repeatedly claims that the bachelor on Gettin’ Hitched must have a small penis because otherwise he could get women without being on TV. He asks an angry Lexie if she’s about to get her period. He tries the “not like other girls” thing when he says that Lexie, who is upset because he has rejected her in an especially cold fashion, is “better than the women who get mad and act this way,” and yes, I’ve quoted that twice, because it made me SO GODDAMN MAD. He worries that any expression of romance towards Lexie might make him look like, in his words, “a nancy-pants.” Seriously, I’ve never seen the words “sissy” and “nancy-pants” thrown around so much in my entire life.

This kind of language and behavior would be offensive in any context because of the homophobia, sexism, and toxic masculinity, but it’s especially glaring coming from characters who are supposed to be at least partially sympathetic in a book marketed to women. It seems especially odd is that we are supposed to think that John is a good dad and that Sean will be a great boyfriend. Why on earth would Lexie, or any woman, want to spend time with someone who thinks that being like a girl is the worst thing a person could be? What kind of message could Lexie have gotten as a little girl when she heard her father say these things in tones of repulsion? The words go unchallenged and unquestioned. Encountering them in a romance novel, even one about hockey, I feel betrayed and invaded.

Because I’m not a sports fan I’m probably not this book’s most specifically targeted demographic – the details about hockey were lost on me. Still, I could see why this series is so popular. It’s funny and sexy. There are some serious emotional issues at play – not enough to mire the book in angst, but enough to give it some solidity. The characters are three-dimensional and interesting and the plot zips right along. If not for the language, I would give this book a B.

However, because the misogyny and homophobia runs throughout the book and goes unchallenged, I’m giving it a D. It’s 2018. Enough already.