(Updated: March 27, 2013)
Earlier this month, pope Benedict XVI announced his historical decision to step down from his office on February 28, 2013. This makes him the first pope to resign since 1415! Therefore, a good moment to take a look at the telephone equipment, which is used by this leader of almost 1.2 billion catholics. 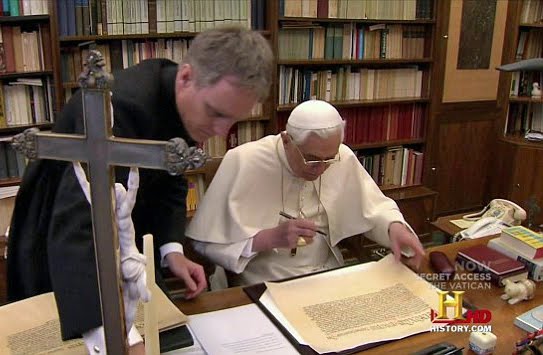 In this picture we see pope Benedict XVI at work in his private study in the papal apartment of the Apostolic Palace in Vatican City. At the far right we can see two white telephones sitting on a side table: an older one with a rotary dial and a newer one with a keypad.

The same combination of a somewhat older rotary dial phone and a newer keypad telephone can be seen at the table of the guard, next to the main entrance door of the papal apartment: 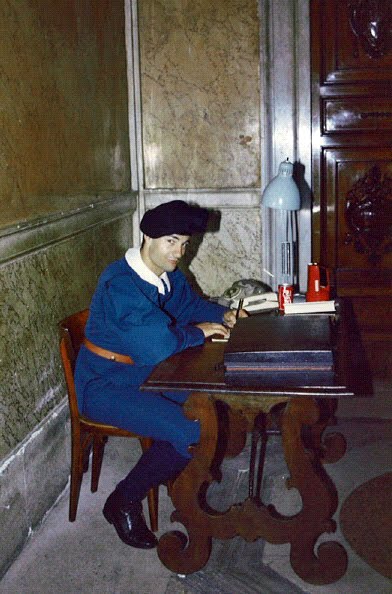 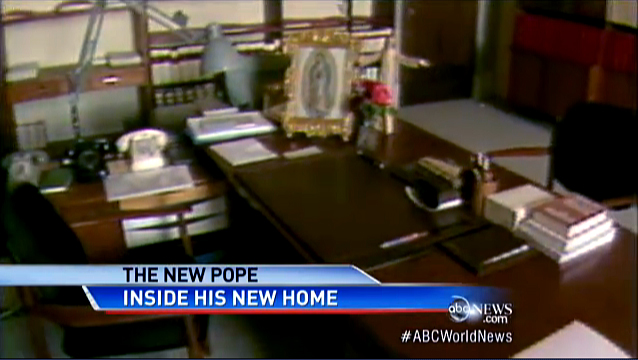 Three rotary dial phones in different colors on a side table
next to the desk of pope John Paul II in the early 1980's.

To prevent people from directly calling the pope, the extension number of the papal apartment is listed nowhere, not even in Vatican phone books. Only a handful of people chosen by the pope himself have his number, which also changes with each new pope. Pope Benedict XVI had no a beeper or cell phone, but he could be reached through the cell phone of his personal secretary, msgr. Georg Gänswein.

The Vatican receives almost 2000 calls a day, and there are always a handful of people saying they must speak with the pope for whatever reasons. One of them was Steve Wozniak, the co-founder of Apple, who once dialed Vatican City, using a so called blue box. He identified himself as Henry Kissinger by imitating Kissinger's German accent and asked to speak to the pope. But due to the different time zone, he was sleeping at that time.* 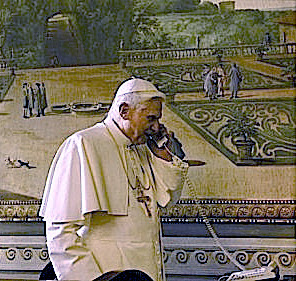 The papal telecommunications started in 1886, at the beginnings of telephony, thanks to Giovanni Battista Marzi who invented the world's first automatic telephone exchange, which linked 10 separate phones, but could only make internal calls. A few decades later, Guglielmo Marconi effected the first Italian link via radio, connecting the Vatican and the papal summer residence at Castel Gandolfo.

After the 1929 Lateran Pacts agreement with Italy, by which the Vatican City State was created, the Vatican was finally allowed to send and receive calls to and from the rest of the world. Therefore, in 1930 a new central telephone exchange was donated by the International Telephone & Telegraph (ITT). It was installed in the Belvedere building and provided telephone services for approximately 360 end users in the various Vatican offices and residences. The telephone exchange was consecrated by pope Pius XI on November 19th, 1930. 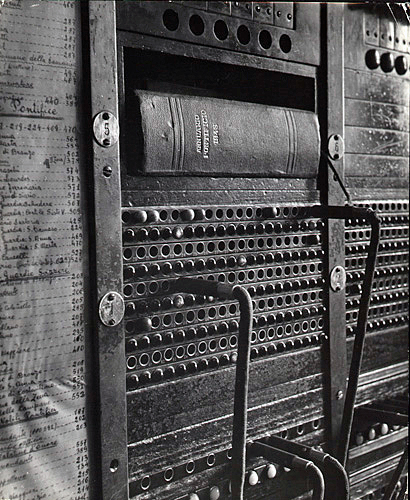 The first Vatican telephone switchboard,
with the upper left lines 2 and 3 are for the pope
The book is the Annuario Pontificio, the directory of the Holy See
(Photo: David Seymour, 1948)

The Bell Rotary Telephone-system was state of the art at the time and had the following functions:
1. Dial a direct phone set inside the Vatican
2. Get a connection with any phone with only two numbers
3. Get an automatic connection with someone in Rome by just dialling the number and adding a "0" in front for an external line
4. Answer calls from outside the Vatican at a post with 2 seating areas
5. priority for some telephone sets for emergencies and important calls

Together with the new exchange, catholics in the United States donated pope Pius XI the first papal telephone: an apparently solid gold phone set, inlaid with mother-of-pearl, emblazoned with the papal arms and decorated with blue enamel. The phone is now for display at the Vatican State Telecommunications Department: 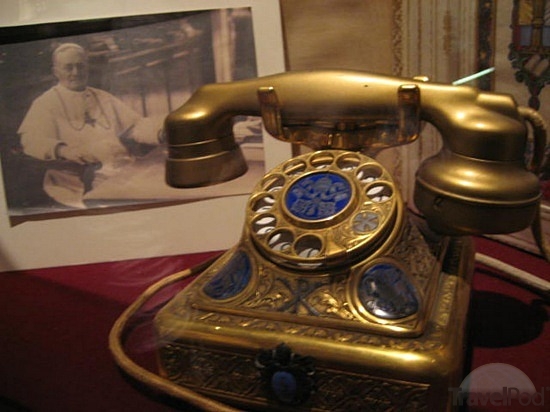 This golden papal telephone was used by several popes, until the end of pope John XXIII's pontificate in 1963. Later, the phone in the pope's apartments was a standard phone in 'papal' white.

In 1957 the International Telephone and Telegraph (ITT) also presented a (less elaborate) ceremonial golden telephone to the Cuban dictator Fulgencio Batista. This was depicted in the 1974 movie The Godfather Part II, where "United Telephone and Telegraph" and American industrialists present a solid golden telephone to the Cuban dictator. 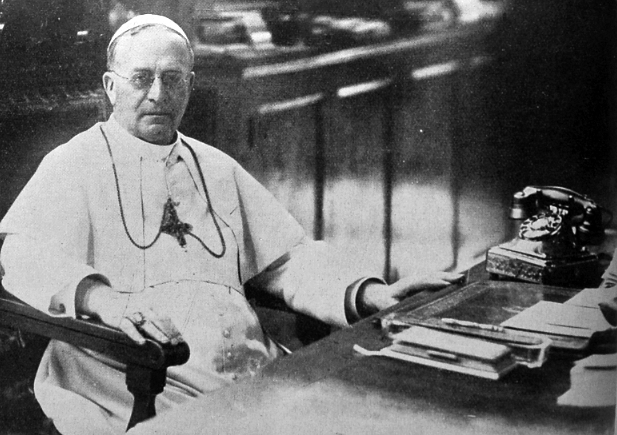 Pope Pius XI sitting at his desk, with the golden telephone. 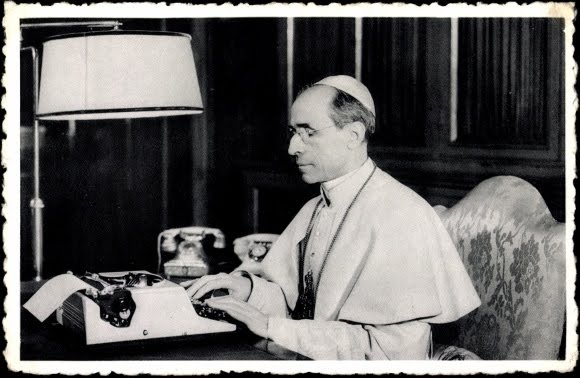 Postcard showing pope Pius XII writing a letter. In the background we can
see the golden phone of Pius XI and another white telephone set,
probably made by the Italian manufacturer Olivetti.

In the forties and fifties it was very special when the pope was calling. For example, when Pius XII picked up the phone and said "que Pacelli" (his original family name), the receiving end would kneel to hear the papal message.

In 1960 the Bell telephone system was replaced by an ITT Pentaconta exchange with a capacity of 1500 numbers, which was later extended to 3000. In June 1992 the Vatican's third central telephone exchange was inaugurated, providing the Vatican with an advanced technological interface, qualifying the Vatican State amongst the first to have a completely numeric telephone network.

The new telephone plant was installed in a forepart of the Belvedere building and consists of a modern numeric telephone exchange with 5120 terminations. The exchange is also equipped with a numeric switch for operator call management and it is linked via radio to the San Giovanni in Laterano, the Palazzo di San Callisto and the Palazzo della Cancelleria. These Roman buildings are extra-territorial zones under jurisdiction of the Holy See.

Since 1948, the Telephone Service of the Vatican State has been run by members of the religious order of the Society of St. Paul. It employs over 30 laymen, a few priests and a dozen nuns, who are members of the Pious Disciples of the Divine Master. On account of their in-depth knowledge of foreign languages, they work for 24 hours a day in six-hour shifts as operators of the manual switchboard: 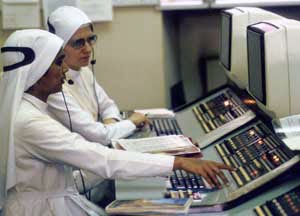 The Vatican Telephone Service is the telecommunications provider of Vatican City, which is part of the Governorate’s Department of Telecommunications since 2002. The Telephone Service maintains a complex infrastructure of telephone and data networks, designed and maintained by its own personnel. In 2005, the Vatican telephone service handled 8.5 million outgoing calls.

In November 2005 the telecommunications department moved into a new three-story brick building, with sleek, comfortable and modern facilities. They also include historical items, such as papal telephones and early technological equipment, on display in glass cases. 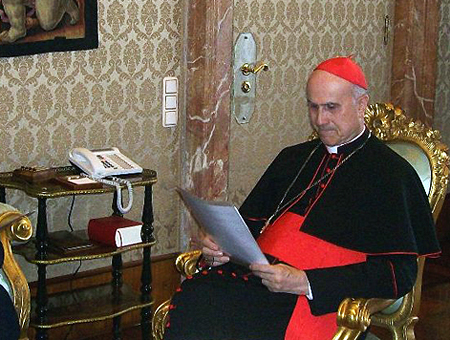 A better look at the present-day keypad telephone, here in
a room used by the cardinal secretary of state, Bertone


After the resignation of pope Benedict XVI, the cardinals of the Roman Catholic Church came together to elect a new pope. The traditional election was done in the famous Sixtine Chapel, but the cardinals stayed in the Casa di Santa Marta, with over 120 rooms. This guesthouse was build in 1996, and got a state-of-the-art Voice over IP (VoIP) telephone network, with Cisco 7911G Unified IP phone sets, as can be seen in the picture below: 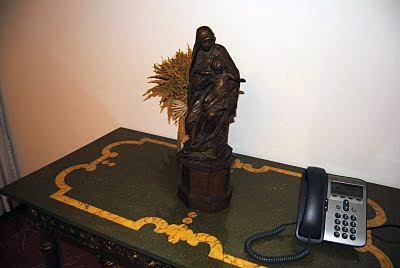 A Cisco 7911G Unified IP phone on a side table in the Vatican
(Photo: Orbis Catholicus Secundus, December 2010)


After the Argentinian archbishop and cardinal Jorge Mario Bergoglio SJ was elected to be the new pope on March 13, he named himself Francis. Shortly afterwards he spoke to former pope Benedict by phone - the first time ever a pope calls his predecessor!

In the days to follow, pope Francis personally called quite a number of other people (including his dentist), probably with the Cisco phone from his Santa Marta suite, but maybe he is also the first pope using a mobile cell phone. We will see.