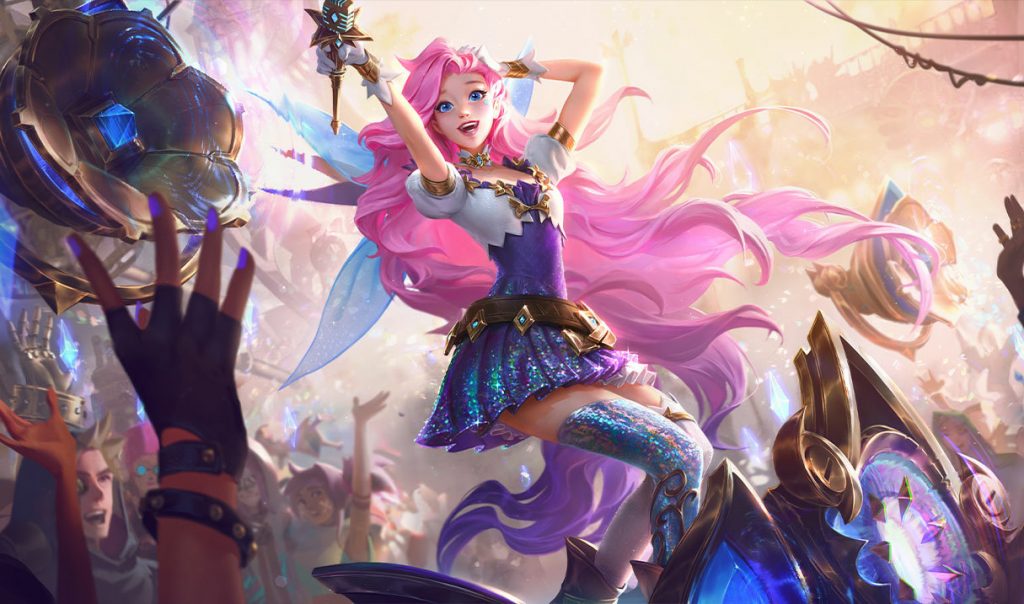 Riot Games introduced a new character to League of Legends last month, a pink-haired pop star named Seraphine from the “pop group” K/DA who also has her own Twitter account to add to the in-depth lore. But according to a recent claim from someone called Stephanie, the character’s likeness may be partially based on them, and what’s more, the person making the allegation was apparently in a relationship with a Riot employee last year in 2019.

“My problem with her is that I think she’s based on me,” Stephanie says in a Medium post published yesterday. They detail that they were in a “brief relationship” with a Riot employee last year and that they only met in person twice after talking for around 3-months. A year after the two stopped talking, Stephanie says Seraphine appeared online bearing similarities in appearance, art style, and even where the character’s from.

The Medium post details that the Riot employee would imply that skin ideas he’d put to the team would be inspired by Stephanie, apparently he had influence in the project. Stephanie was also invited to the studio where the Riot employee had shown off Stephanie’s academic writing based on the LoL universe. They also received custom art of them as K/DA Ahri from the illustrators. The relationship ended shortly after that as what Stephanie explains, “I cancelled plans to see him because I thought he was moving too fast and expressed that, then he ended things and blocked me.”

When Seraphine started doing the rounds online as part of the character’s social personality, Stephanie started to notice similarities. Their name for one being similar to one another, but also their art of which they say they sent pictures to the Riot employee and look “strikingly similar” to the art style used by Seraphine. The character’s lore also states that they’re from both Piltover and Zaun, which was the subject of the mentioned academic writing. Stephanie also highlights the character’s selfies with a cat, which bears similarities to the images they claim to have sent the Riot employee last year.

“I’ve felt really grossed-out about it, to the point that I can’t play one of my favorite videogames.” they explain, “People I’ve never met send her to me online and point out the similarities, […] it does suck to see your features torn apart on a massive scale every time you open your Twitter feed.” They also note that “Even worse than all that has been the wondering about whether or not she’s based off me.”

Riot Games has issued a statement to PC Gamer, “Seraphine was independently created by Riot Games and was not based on any individual,” the statement reads, “Additionally, the former employee [Stephanie] is referring to left Riot more than a year ago and was in a department and role that has no input whatsoever into the creative design process.”

Meanwhile, a Senior Game Designer at Riot last month who worked on Seraphine tweeted that Riot’s Data Engineer, RiotWhiskies was an inspiration for the character. Stephanie has however stated that they don’t believe that Seraphine is 100% based on them, and highlights that Riot claims the character was “not based on any individual”.

Seraphine is a star that makes everyone around her shine just a little bit brighter. That was very easy for me to capture in her gameplay, since I get to shine brighter by being around @RiotWhiskies every day.

Thank you to my favorite person in the world for the inspiration.

Brian Kalt, a Michigan State University law professor spoke with PC Gamer about the allegations, saying the legal case would likely involve “the tort of right of publicity, also known as appropriation of likeness,” which “protects your name or likeness from unwarranted intrusion or exploitation.”

It’s understandable, given the events, why Stephanie feels the character is based on them. Riot may have already denied the allegations, but there’s still the possibility that the creative process may have had influences thrown in. Of course, we likely won’t know unless someone, such as the Riot employee Stephanie was involved with, comes forward and denies or confirms it.

The post After Allegations, Riot Says League of Legends Character Seraphine Was “Not Based on Any Individual” by Ben Bayliss appeared first on DualShockers.

LaptrinhX
—
After Allegations, Riot Says League of Legends Character Seraphine Was “Not Based on Any Individual”
Share this