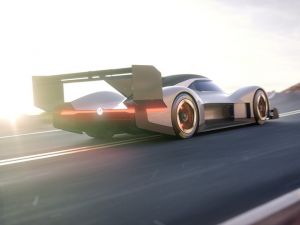 has revealed a new electric concept, the I.D. R Pikes Peak. The sole purpose of this concept race car is to take on the Pikes Peak International Hill Climb on June 24, 2018 in Colorado, USA. Volkswagen will be returning to this event after a period of 30 years. Its last entrant in 1987 was a dual-engined Golf producing 652PS. The I.D. R Pikes Peak is the youngest member of the I.D. family of electric vehicles and is the brainchild of VW's motorsport divisions - Volkswagen R and Volkswagen Motorsport.

The all-electric prototype race car looks like it belongs within a racing game. Though no details have been announced, we know that it will have two electric motors, one for each axle. And although this car may look like an outlandish take on the future of automobiles, Volkswagen does plan on launching 20 fully-electric cars by 2025, with the first I.D. family car set to go into production by the end of 2019 in Zwickau, in the Saxony region of Germany.

"We want to be at the forefront of electromobility with Volkswagen and the I.D. family," explained Volkswagen Member of the Board of Management with responsibility for Development, Dr. Frank Welsch. "Competing in the most famous hill climb in the world with the I.D. R Pikes Peak not only has symbolic meaning but is also a valuable test for the general development of electric cars."