Fifth generation wireless (5G) is not magic. It's not witchcraft. It's not a "race." It's not going to kill you. And frankly, it's not even all that interesting.

We've noted for years now how 5G has been over-hyped by wireless carriers looking to spike lagging smartphone sales, or the gear makers hoping to cash in on global network builds. They've been busily trying to suggest that 5G is almost magic, capable of everything short of curing cancer. In reality 5G is barely available, expensive to adopt, and requires pricey new handsets that aren't worth it because we haven't figured out battery life issues. In time 5G will be a good thing in the way faster, more resilient networks are good, but it's not actually all that transformative.

On the flip side of the industry's relentless empty hype is the conspiracy theorists who, despite the overwhelming consensus of scientists, insist that 5G is bad for your health. While it would be hubris to claim we know everything about the way wireless technology impacts human biology, the science we have at the moment makes it clear 5G is not killing you. Theories to the contrary have always bubbled around the internet, but during the pandemic they've somehow gone next level, resulting in folks actually burning down 5G towers in the UK last week:

"There have been fires at masts in Birmingham, Liverpool and Melling in Merseyside. A video, allegedly of the blaze in Aigburth, was shared on YouTube and Facebook, claiming a link between the mobile technology and Covid-19.

Some foreign influence operations designed to try and wreak havoc have long circulated 5G-related bullshit among the internet gullible. But there's also a laundry list of assorted internet famous folks who've also been happily linking 5G to coronavirus on social media to either push an embedded ideology or just make a buck, like these two gentlemen--both verified and with 300K+ follower counts: 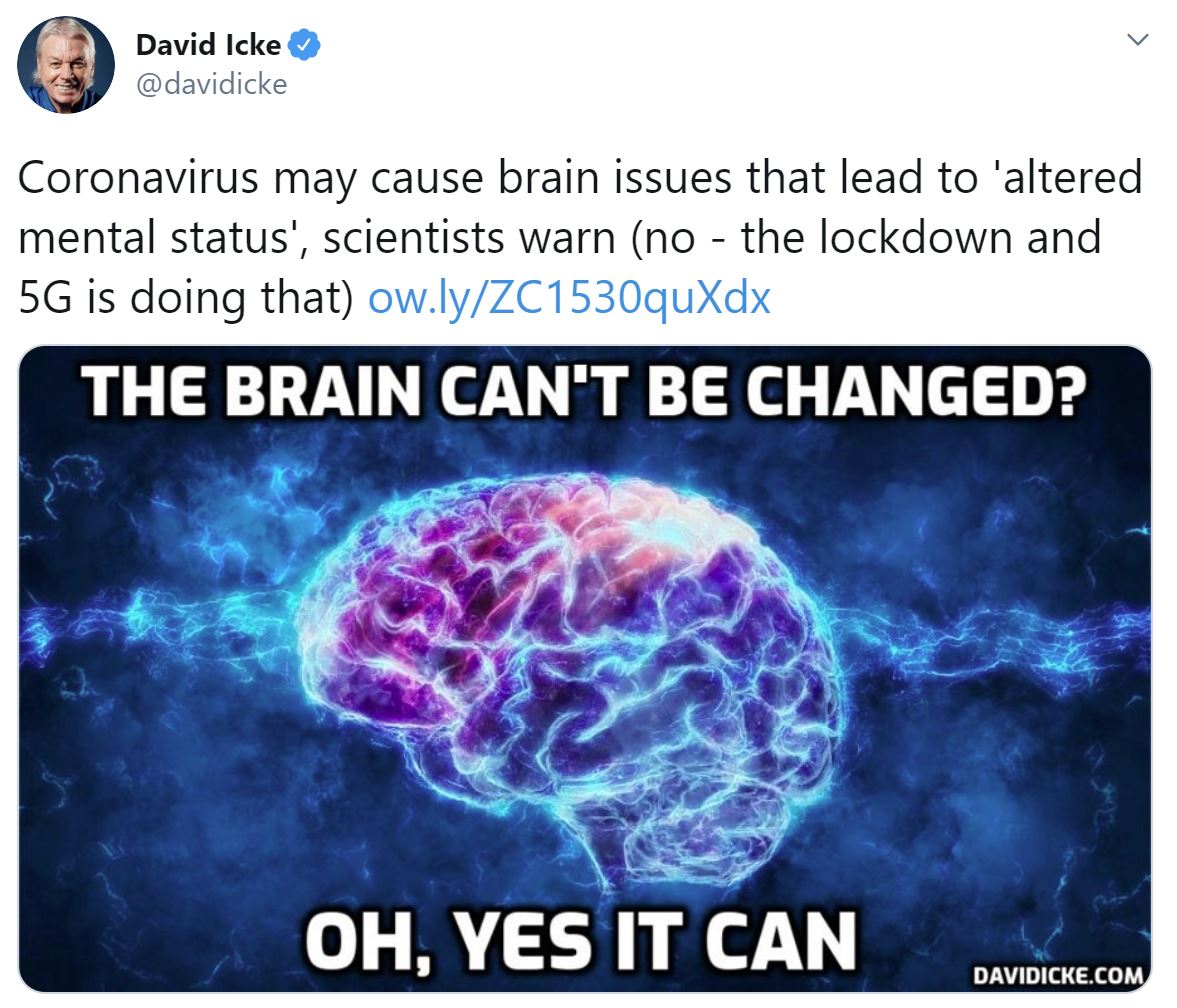 For those unfamiliar with Icke, he's a sort of proto-Alex Jones if Jones believed the world was secretly run by lizard people. He's a well known crackpot, but he has followers and a blue checkmark on Twitter.

Hell, even Hollywood celebrities like Woody Harrelson have been spreading around the bullshit, thanks in part to our new Goop mindset, which took the "healing powers of crystals" mentality and industrialized it at scale:

"Former “Cheers” TV star Woody Harrelson recently posted a report “about the negative effects of 5G” and its supposed role in the coronavirus pandemic to his more than 2 million Instagram followers. "I haven’t fully vetted it I find it very interesting,” he wrote of the report claiming that “5G radiation” is “exacerbating” the contagion’s spread and making it more lethal."

There's no quick fix, there's only a simple individual answer: don't be part of the fucking problem. Fact check. Verify your sources. At least try to rely on actual scientists and widely-credible experts instead of the fun-loving dudebros at brainwaves5Gdeath.com.

Again, the ultimate irony being is that 5G isn't just safe and decidedly not a mind control experiment, but it's not even all that interesting. It's a spottily available, over-hyped, and expensive upgrade to the 4G networks you're already using. And while it will provide impressive speeds and more resilient networks in time, right now (at least in the U.S.), it's an over-marketed, under-delivered mess not worthy of this level of attention.