TeraCopy 3.27, the most recent version of the popular file copy tool for Windows, comes with support for running Powershell scripts.

TeraCopy is a popular copy handler which can take over the default copy and move functions of Windows Explorer. Users who don't want to go as far may use it independently as well, for instance to run larger copy or move operations on Windows machines.

The program supports a set of features that Windows' default copy and move functions don't support. This includes attempts to correct errors during the job, file verification, the preserving of timestamps, or the copying of located files. 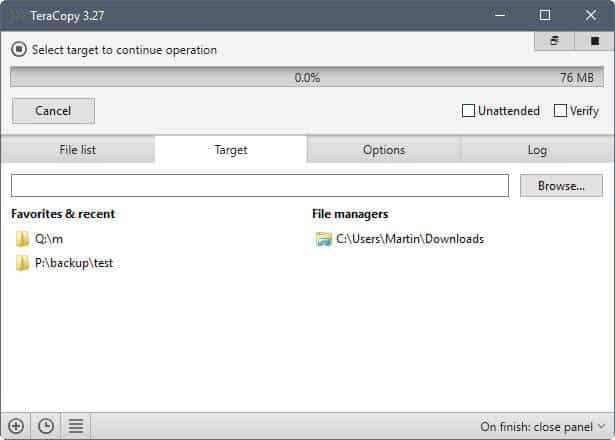 While you could select "on finish" actions previously as well, these were restricted to changing the device's power start on completion. You could use them to shut down the PC for instance after a copy or move operation.

The new version of TeraCopy comes with a script that demonstrates that functionality. You select it with a click on the "on finish" option that is located in the bottom right corner of the interface.

Pushover is a notification script for the service to get notifications on your mobile devices. You need to grab a user key and app token from the official website to use the service though.

TeraCopy 3.27 comes with additional features. You may start verification processes directly from the context menu, and file names of renamed files are shown in the file list as well in that new version.

The developer of TeraCopy released version 3.26 initially, but the version that is offered now is 3.27.  The website offers no information on that new version. Considering that it has been released on the same day as version 3.26, it is likely that it fixes a bug or bugs in that version.

The ability to run PowerShell commands on the completion of file operations adds value to TeraCopy. While it is not something that most home users will have a lot of use for, it could make the program more attractive for company environments.

Now You: How do you copy files on Windows?