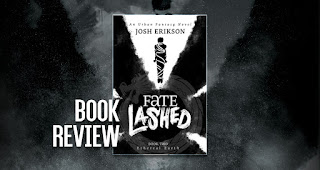 
Author information: Josh Erikson doesn't have any fancy credentials to tell you about here. He lives in rural Nebraska (US) with his wife and two children, where he mostly reads, writes, and reads about writing. His many awards and accolades include some beautiful photoshopped certificates he printed at home and a yo-yo trick contest he once won at a funfair in a grocery store parking lot.
His writing style has been compared to greats like Neil Gaiman, Joss Whedon, and Jim Butcher. Of course, that was in his dreams and should consequently be viewed with some degree of skepticism.
Format: Hero Lashed was self-published by the author in 2019 and is available through Kindle Unlimited and in ebook and paperback formats. There's also an audiobook narrated by the author himself. The book is 402 pages long divided into 40 chapters.
OVERVIEW:  Hero Forged made me smile and cheer for Gabe. Fate Lashed continues his misadventures in an equally humorous way.
Gabe would love to live a regular life, but cosmic forces and Umbras have different plans for him. His new mission is simple - he needs to recover Igla, the key to the universe, and save whole creation. Easy-peasy.
Helped by his succubus friend/girlfriend Heather and a group of weird companions (stunning Asian scholar, a mythical beast, and a Hexen), Gabe needs to steal stuff, talk his way out of troubles and decide whom to trust.
I’ll be frank - Fate Lashed didn’t resonate with me the way Hero Forged did, probably because I had no emotional attachment to the wide cast of new characters. Constant jokes felt tiring in places and weakened some twists. But because this is Erikson, the novel has an emotional center that keeps it grounded and focused. The first book brought Gabe and Heather together. The sequel shows them trying to figure out what’s really between them.
The story that unfolds leads them to test their strange relationship against impossible obstacles. Ancient gods, Umbras, mythical creatures, monsters all want to get Igla, and things get insane. The novel embraces horror, heist, and comedy but doesn’t drown in it. It takes notes and makes them into something its own. We also get a solid development for both Gabe and Heather, and the strong ending opens a lot of exciting possibilities for sequels.
CONCLUSION: While it doesn’t land every joke, it also elicited no groans. Fate Lashed has enough heart and depth to make it more than a worthy follow-up to the original.
fantasybookcritic book review urban fantasy
Latest Posts