Support for the FOX NOW app on Android TV might have come to an end. A user on Reddit has posted an email shared with them by the FOX NOW team which effectively confirms as much. The email explicitly states the Android TV version of the app is an older version and one which is no longer supported by updates.

At present the Google Play Store listing for the app is still showing support for Android TV devices and therefore devices owners are still able to download and install the app. However, the email specifically states that one of the features that is no longer available due to the lack of app support is live-streaming. Arguably, one of the main features of an app that is titled “FOX NOW – On Demand & Live TV.” After installing, it does seem to be the case that while some on-demand content is available, the app does not allow users to access live TV content at all. As the image above shows, the app is completely void of the option, although it remains to be seen how long that has been the case. Either way, based on the email, there does not seem to be any plans at all to fix the lack of support issue in the future, or offer access to live TV via the Android TV app.

The email received by the FOX NOW user does make it clear that this is only an issue for Android TV, as the email suggests TV-based users can continue to enjoy a fully-supported app experience on Amazon Fire TV, Apple TV, Roku TV, and Xbox One devices. Furthermore, the email also states the mobile version still offers support for Chromecast and therefore users can still cast content, including live TV from their smartphone to their TV – as long as a Chromecast-enabled device is present. As Android TV devices do come with Chromecast built-in, this remains an option for Android TV device owners going forward. To be clear, the actual FOX NOW app remains operational and supported on virtually all platforms, it is just the he Android TV-optimized version of the app (available through the same link on the Google Play Store) that seems likely to be at the end of the road, pending any official confirmation from the company. 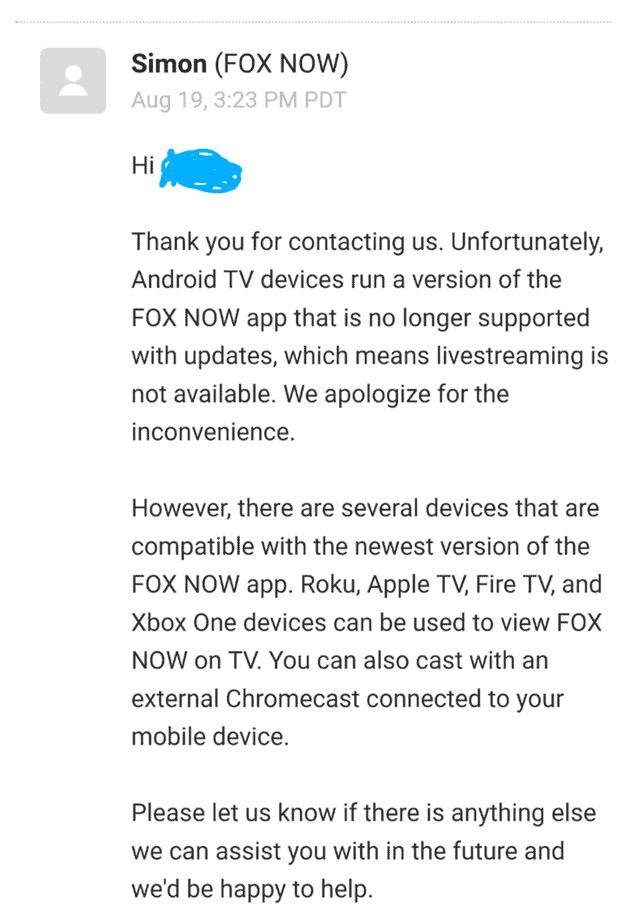