You don’t need to root, install a custom ROM, or switch to an iPhone to do this anymore. Android finally has the app permission system it should have had all along.

Android apps will ask for a permission when they need it. For example, instead of giving an app access to your camera when you install it, you’ll be prompted the first time the app wants to access your camera.

But you can manually manage any app’s permissions, even if it was designed for an older version of Android and doesn’t normally ask you.

To do this, you’ll need Android 6.0 Marshmallow or a newer version on your device. Open the Settings app and tap “Apps” under the Device heading to get started. 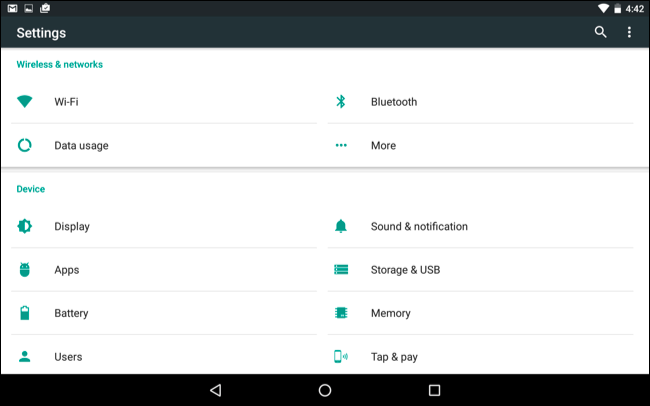 You’ll see a list of all the apps installed on your Android device. Tap one of the apps in the list to view more information. On the App info screen, you’ll see a “Permissions” category that lists all the permissions that individual app has access to. Tap “Permissions.”

You can also quickly access the App Info screen by long-pressing an app’s icon on your app drawer, dragging it to the “App info” shortcut that appears at the top of the screen, and releasing it. This shortcut may not be present on every Android device as different devices use different interfaces tweaked by their manufacturers and carriers. 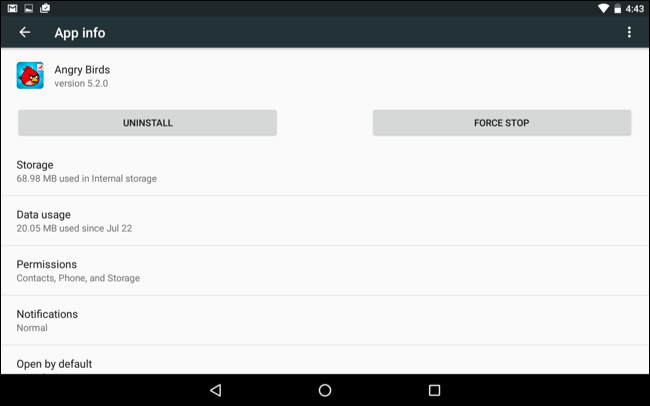 This will take you to the new “App permissions” screen. Different categories of permissions each app has—for example, Camera, Contacts, Location, Microphone, Phone, SMS, and Storage—will be displayed here. Older Android apps automatically get these permissions when you install them, but you can revoke any permission you want from here.

This is very similar to the “App ops” permission system Google manually stripped out of Android 4.4.2 after websites like ours told users how to access it. It’s finally back! 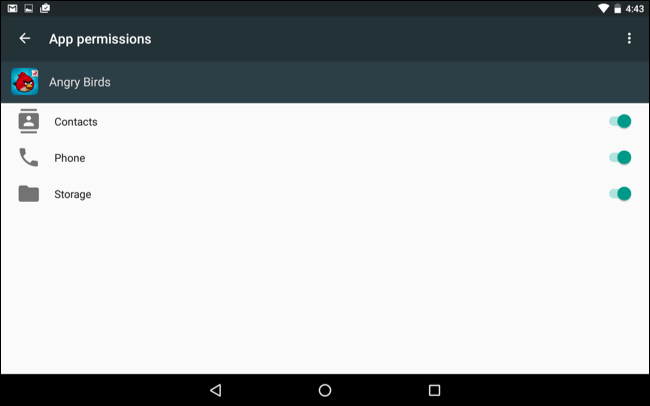 When revoking permissions from older applications, you’ll see a warning message saying, “This app was designed for an older version of Android. Denying permission may cause it to no longer function as intended.”

Older applications weren’t designed for this feature, and they generally just assume they have access to any permissions they request. Most of the time, applications should just continue working normally if you revoke their permissions. In some rare cases, the application may crash—if it does, you’ll need to give it permission again. In other cases, an application may just not function normally. For example, if you revoke the Camera permission from an app that can normally take photos, it won’t be able to take photos anymore. You won’t receive an error message that asks you to turn the Camera permission back on—it will just appear to not work.

Either way, if you encounter a problem with an app, you can always come back to this screen and grant it these permissions again. 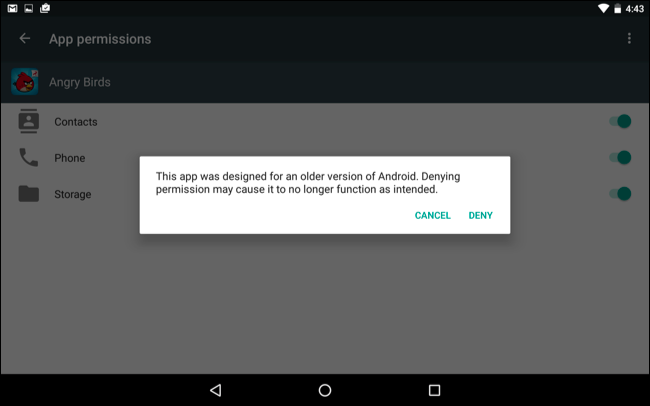 You can also tap the menu button on the App permissions screen and tap “All permissions” to see exactly which permissions an app is using. This can give you a better idea of what an app is actually doing with those permissions. Android now hides these more fine-grained permissions. You can’t actually manage these individual permissions—you can only choose which categories of permissions to allow.

Be aware: App updates can add new “sub-permissions” in a category without asking you again. For example, even if an app only uses the “read phone status and identity” permission in the Phone category and you choose to allow “Phone” access, a future update to the app could add the “Directly call phone numbers; this may cost you money,” and “Reroute outgoing calls” permissions. As these are part of the “Phone” category, the app would be allowed to use them without any additional prompts, as you’ve allowed that “Phone” access.  Here’s a list of permission groups and more information on Google’s website. 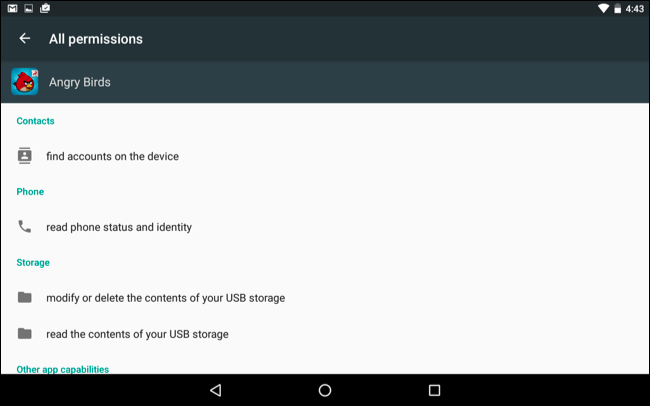 View and Manage All App Permissions 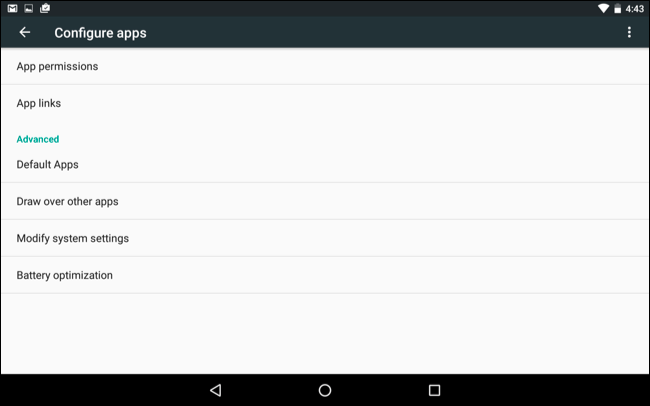 You’ll see a list of different categories of permissions along with the number of apps installed that have access to that permission. Categories include Body Sensors, Calendar, Camera, Contacts, Location, Microphone, Phone, SMS, Storage, and some “additional permissions.” 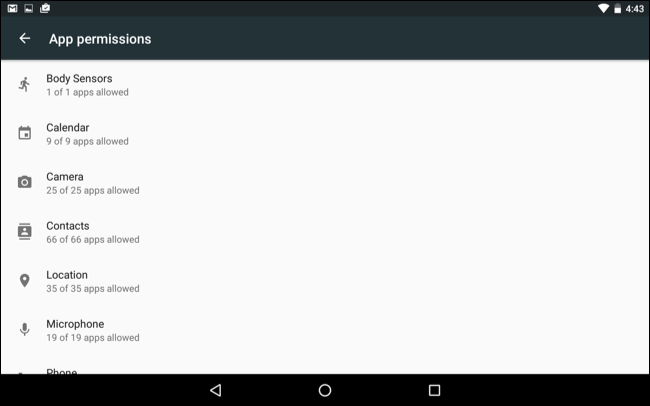 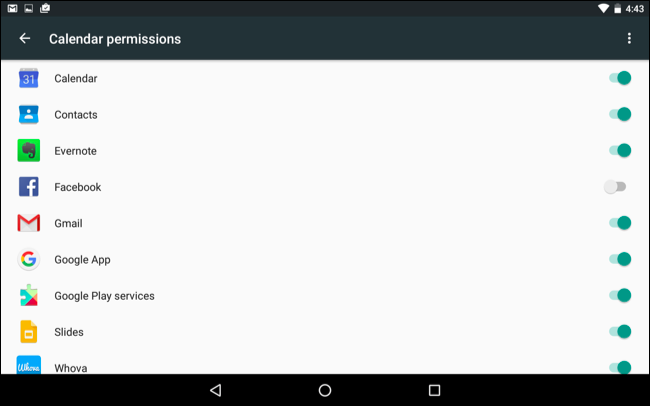 As with managing an individual app’s permissions above, you’ll see a warning message if that app was designed for a previous version of Android. Most apps should continually working fine, anyway — unless you revoke a permission that’s central to any functionality. For example, you won’t be able to take photos from within the Facebook app if you revoke the Facebook app’s Camera permission. You’ll have to grant it that permission again to take photos.

As usual with Android, some of these steps may work differently on some devices. We performed this process with Android 6.0 on Google’s own Nexus 7 (2013) tablet. Android manufacturers often modify the interface on their devices, and some options may be in different places.

LaptrinhX
—
How to Manage App Permissions on Android
Share this