1.Bootstrap
Netty applications set the start of the bootstrap class, which provides a container for application network configuration

3.ChannelHandler
ChannelHandler supports many protocols and provides containers for data processing. We already know that ChannelHandler is triggered by a specific event. ChannelHandler can be dedicated to almost all actions, including turning an object into bytes (or vice versa) and exception handling thrown during execution.
A common interface is ChannelInboundHandler, which can handle application logic when receiving inbound events (including received data). When you need to provide a response, you can also scour the data from the channel inboundhandler. In a word, business logic often lives in one or more channel inboundhandlers.

5.EventLoop
EventLoop is used to handle I/O operations of channels. A single EventLoop usually handles multiple Channel events. An EventLoopGroup can have more than one EventLoop and provide an iteration to act on the next in the retrieval list

6.ChannelFuture
All of Netty's I/O operations are asynchronous. Because an operation may not return immediately, we need a way to determine its result later. For this purpose, Netty provides the interface ChannelFuture. Its addListener method registers a ChannelFutureListener, which can be notified (whether successful or not) when the operation is completed.
More about ChannelFuture
Think of a ChannelFuture object as a placeholder for the results of future operations. When to execute depends on several factors, so it is impossible to predict and accurately. But we can be sure that it will be implemented. In addition, all operations returning ChannelFuture objects and belonging to the same Channel will be executed in the correct order after they are called.

An EventLoopGroup has one or more eventloops. Imagine the EventLoop working as a Thread for the Channel. (in fact, an EventLoop is bound to be a Thread for its life cycle.)
When creating a Channel, Netty registers the service life of the Channel (and also a separate Thread) through a separate EventLoop instance. That's why your application doesn't need to synchronize Netty's I/O operations; all Channel I/O is always performed with the same Thread. 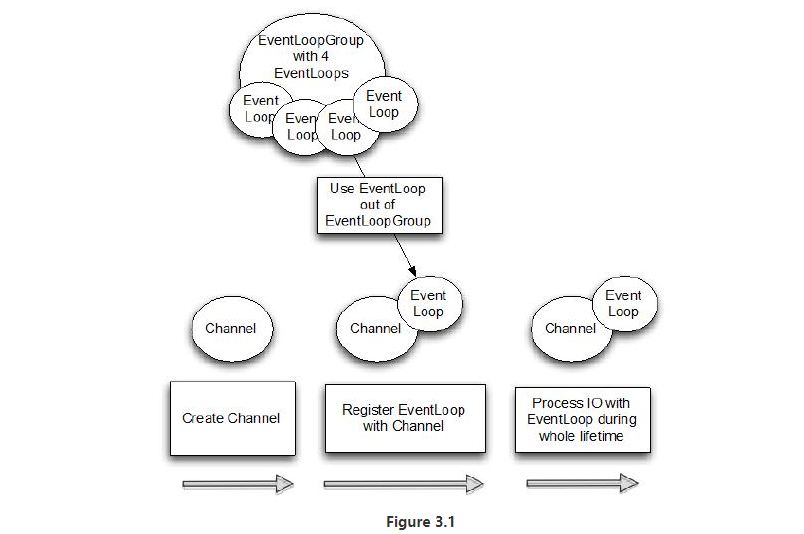 1. server side
Code to create an instance of ServerBootstrap (step 4). Since we use in NIO transmission, we have specified NioEventLoopGroup (3) to accept and process new connections, and NioServerSocketChannel (5) as the channel type. After that, we set the local address as InetSocketAddress and the selected port (6) as follows. The server will be bound to this address to listen for new connection requests.
Step 7 is the key: Here we use a special class, ChannelInitializer. When a new connection is accepted, a new subchannel will be created, and the ChannelInitializer will add an instance of our EchoServerHandler to the ChannelPipeline of the Channel. As we mentioned earlier, if there is inbound information, the processor will be notified.
Although NIO is extensible, its correct configuration is not simple. Especially for multithreading, it is not easy to deal with it correctly. Fortunately, Netty's design encapsulates most of the complexity, especially through abstraction, such as EventLoopGroup, SocketChannel, and ChannelInitializer.
In step 8, we bind the server and wait for the binding to complete. (the reason for calling sync() is that the current thread is blocked) the application in step 9 will wait for the server Channel to shut down (because we call sync() on the CloseFuture of the Channel). Now, we can close EventLoopGroup and release all resources, including all created threads (10).

Main code component of server:
Business logic implemented by EchoServerHandler
In the main() method, the server is booted

Perform the steps required for the latter:
Create a ServerBootstrap instance to boot the server and then bind it
Create and assign a NioEventLoopGroup instance to handle event processing, such as accepting new connections and read / write data.
Specify the local InetSocketAddress to bind to the server
Initialize each new Channel through the EchoServerHandler instance
Finally, call ServerBootstrap.bind() to bind the server.
In this way, the initialization of the server is completed and can be used.

2. Server Handler
channelRead() - every inbound message calls
channelReadComplete() - called when the last channelread() is notified to the processor that it is the last message in the current batch
Exceptionfault() - called when an exception is caught during a read operation

Create a Bootstrap to initialize the client
An instance of NioEventLoopGroup is assigned to handle the event, which includes creating new connections and handling inbound and outbound data
Create an InetSocketAddress to connect to the server
When connecting to the server, an EchoClientHandler will be installed in the pipeline
Bootstrap.connect () is then called to connect to the remote - in this case, the echo server.

2, Ease of use
1. A large number of javadoc and code instances
2. In addition to the additional restrictions in JDK1.6 +. (some features are only supported in Java 1.7 +. )