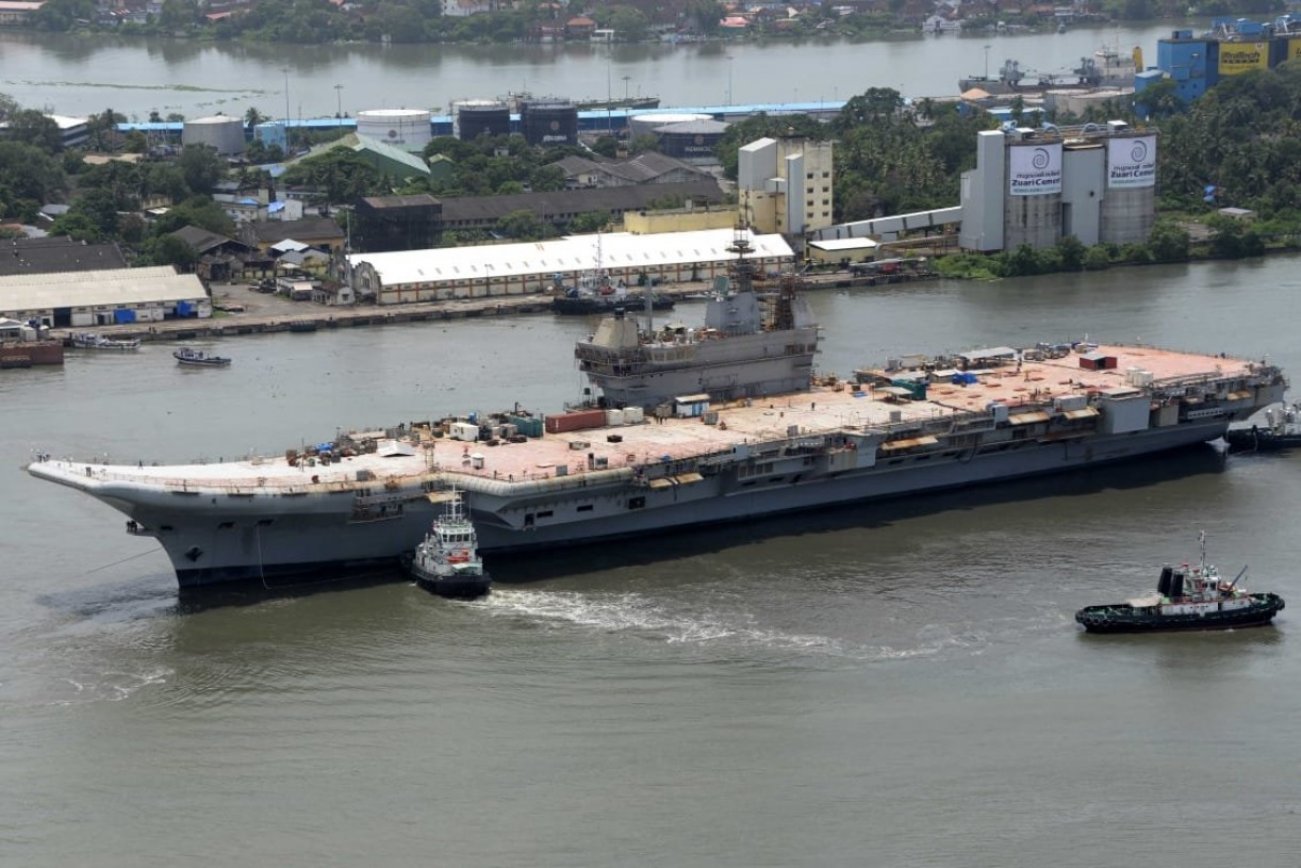 India used them effectively in a map-changing war in 1971.

In the wake of the commissioning of China’s second aircraft carrier, it’s worth remembering that the People’s Republic of China is actually only the third Asian state to operate its own aircraft carrier. The first was Japan, which after a long hiatus following its World War II misadventures, is only just getting back into carrier operations.

Meanwhile, not only has the Indian Navy operated the powerful vessels for nearly sixty years, it also used them effectively in a map-changing war in 1971.

Back in 1957, New Delhi purchased the British Royal Navy’s Hercules, a Hermes-class light fleet carrier that was 75 percent complete when her construction was frozen in May 1946.

Hercules was towed to Belfast, Northern Ireland, where shipbuilder Harland and Wolff completed her in a configuration modernized for jet fighter operations with an angled flight deck and steam catapults. She was finally commissioned as the Vikrant (“Courageous”) in Indian Navy service on March 4, 1961.

As a light carrier, Vikrant was considerably smaller compared to her contemporaries, measuring only 210 meters long and displacing 17,600 tons. But her limited deck space was fine, as the Indian Navy was also busy building its naval air arm from scratch, procuring the first of 66 Hawker Sea Hawk jet fighters—mostly second-hand British and German aircraft—as well as 17 tubby piston-engine Breguet Alize anti-submarine aircraft.

After receiving training in the UK, an Indian Sea Hawk pilot performed the service’s first carrier landing on May 18, 1961. However, Vikrant subsequently sat out a 1965 conflict with Pakistan as she was undergoing a refit.

Conflict in the Bay of Bengal

By 1971, war clouds were again on the horizon between India and Pakistan due to Islamabad’s brutal repression of East Pakistan. This prompted millions of refugees to flee into India, prompting New Delhi to begin supporting insurgent supporting independence of the region from West Pakistan.

By late 1971, the government of Indra Ghandi was set on supporting Bengali revolutionaries seeking to eject the Pakistani military entirely.

Though only three of Vikrant’s four boilers were functioning, limiting her maximum speed to just 17 knots, naval command insisted she must participate in the coming conflict, lest a second no-show deal a blow to the Navy’s morale.

The Vikrant’s role was to maintain a naval blockade of East Pakistan—preventing the Pakistani Army from dispatching reinforcements or evacuating by sea. Once the ground campaign began—a lightning campaign in which helicopters and amphibious tanks were used to leap-frog across Bangladesh’s many rivers—the Vikrant’s air wing would focus on hammering Pakistani naval assets and port facilities.

The air wing’s main combat strength came from INAS 300 “White Tiger” squadron, equipped with eighteen Sea Hawk fighter bombers. With a maximum speed of 600 miles per hour, these would have been outclassed had they encountered the handful of F-86 Sabre’s the Pakistani Air Force had deployed to East Pakistan, but their true potential lay as stable ground-attack platforms armed with four 20-millimeter Hispano cannons, and up to four 500-pound bombs or sixteen 5” rockets.

The lumpy three-ma Alize patrol planes of INAS 310 “Cobra” Squadron were foremost designed to search for submarines using air-dropped sonobuoys and surface-search radar (to catch subs that were surfaced or snorkeling to recharge batteries) and then sink them with depth charges and homing torpedoes. However, they also could be adapted to a more conventional attack role carrying 68-millimeter rockets and bombs.

The Alizes could fly long distances with their range of 1,000 miles, but would take a while doing so: though there maximum speed was 290 miles per hour, they frequently cruised at only half that. Their radars proved useful for maintaining the blockade by monitoring shipping traffic in lengthy patrols.

The Pakistani Navy concluded a lack of facilities and geographic vulnerability made it impractical to deploy major warships to East Pakistan, so its presence there was limited to squadron of four gunboats as well as smaller armed boats capable of navigating Bangladesh’s many rivers. Thus, the major naval battles of Indo-Pakistani war were fought on India’s western flank.

However, the Pakistani Navy had one joker up its sleeve: the submarine PNS Ghazi, a former U.S. Tench-class submarine from World War II. Pakistan hoped that a lucky torpedo or two from Ghazi might sink Vikant, turning its losing hand in the Bay of Bengal into a winning one—or at least constrain Vikrant’s operations.

The Indian Navy was also aware of Ghazi’s presence in the sector and made sinking her a priority.

The website Mission Vikrant 71 collects numerous fascinating anecdotes that convey the experience of the sailors and aviators onboard the Vikrant—including one account by pilot Richard Clarke describing Indian anti-submarine operations.

On the second day of the war on December 4, the Vikrat was cruising off the Andaman islands when her lookouts reported spotting a periscope. Clarke scrambled his Alize into the sky loaded with depth charges and headed towards a “distinct ripple.” He released the depth charges on target and was received by jubilant crew upon landing on deck.

But Clarke recalled that upon being summoned for debriefing, “I very sheepishly had to tell the Fleet Commander that there in fact there was no submarine in the crystal clear blue waters below the ripple when I flew over it. But I realized this only seconds before the depth charges exploded”

In fact, on December 3 Ghazi failed to locate Vikrant and instead moved to deploy mines at the entrance of Visakhapatnam port, the site of the Indian naval HQ. Around midnight on December 3-4 mysterious circumstances caused the submarine to sink with the loss of all 92 aboard.

Whether this was a result of depth charges launched by the Indian destroyer Rajput, a collision with the sea floor while attempting to dodge those depth charges, or due to a mishap during minelaying remains controversial.

The carrier-based warplanes encountered heavy anti-aircraft fire, and often returned pocked with shrapnel and bullet holes—though none were lost in the fourteen-day war.

Cut off from reinforcements, with riverine assets largely sunk from the air (and even one occasion, by amphibious tanks), and unable to evacuate by sea, Pakistani army forces in East Pakistan surrendered on December 16, resulting in the creation of present-day Bangladesh.

Afterwards, according to 300 squadron officer Gurnham Singh, when one of the carrier’s Alouette helicopters was dispatched ashore on a resupply mission—pilots from 300 squadron requested the chopper crew return with some war booty: spicy Chittagong pickles. This wish was granted when the chopper returned bearing 30 kilos of the spicy pickles plus paratha flat breads.

Sébastien Roblin holds a Master’s Degree in Conflict Resolution from Georgetown University and served as a university instructor for the Peace Corps in China. He has also worked in education, editing, and refugee resettlement in France and the United States.

This first appeared in 2019 and is being reposted due to reader interest.

LaptrinhX
—
After 60 Years, India Knows How to Use Aircraft Carriers to Its Advantage
Share this