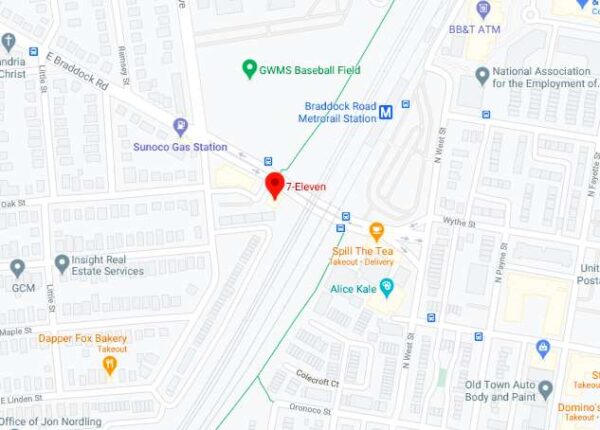 A 50-year-old Alexandria man is being held without bond in city jail for allegedly firing a bullet that struck the door of a 7-Eleven near the Braddock Road Metro station.

No one was injured in the incident, which occurred at around 8:30 p.m. at the 7-Eleven at 421 E. Braddock Road, which is next door to Lena’s Wood-Fired Pizza & Tap and across the street from George Washington Middle School.

Security footage from a nearby surveillance camera captured Farmer allegedly urinating on the side of the building, and then walk into the store. Farmer then “appears to get into an argument with another known subject near the register of the 7-Eleven and continue to argue outside of the store,” according to a police search warrant affidavit.

Farmer is then seen walking back to his silver minivan to retrieve a handgun, according to police.

“The other male is seen walking and then running while Farmer proceeds to raise his right hand in what appears to be a shooting motion,” police reported. “An ashtray portion of a trash can is seen jumping from its resting location.”

Police said that Farmer then entered the store with what appeared to be a gun in his right hand, and that he quickly looked around and walked out. He was then seen getting into his minivan and driving away.

Police recovered a shell casing near where Farmer’s minivan was parked, and a lead slug near the trash can.

Farmer was arrested at the Best Western in Springfield, and was scheduled to check out of his room on April 16, according to police. He goes to court for the incident on May 18.