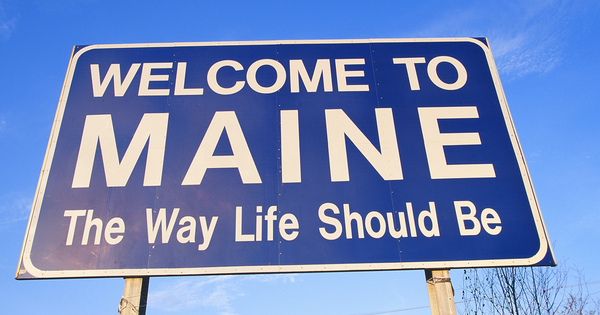 We arrived at five-thirty. Hours earlier than I expected. As late as eight seemed possible, but more likely seven. And no, we didn’t get an early start, we simply had a smooth ride. Mostly. We pulled off the highway in Easton to use a bathroom. The blue amenities sign before the exit showed a McDonalds logo. As good a stop as any, maybe get a coffee, too.

As we neared the end of the exit ramp, another sign showed the McDonalds logo with a left arrow and below that 1 MILE. A growing aggravation for me. Signs on the highway advertising businesses that aren’t at the exit. Sometimes the sign reads 2.4 MILES or 3.3 MILES. In those cases, mumbling and grumbling about contacting the manager to tell them how they wasted my time, I get back on the highway looking for another place to stop. One mile, that stretches my patience to its end.

After driving about three-quarters of a mile, we passed another sign that said McDonalds – 1 MILE. When we finally got to McDonalds, the door was locked. Drive Thru Only. That part of our trip wasn’t so smooth.

We left our house just before five this morning—summer vacation in Maine. A week to bike and hike and run. To explore small towns and eat ice cream. To drive to mountain tops and the seaside. To read and write and relax.

“Wait,” you say, “you just told us your house is empty. Aren’t you worried about a break-in?” No, anything we own of any value is with us: primarily that’s Sophie’s MacBook and Eli’s bike. Our lesser bikes and laptops are with us too. A burglar in our house would look around, grab a diet coke and hit the road. We don’t even have any booze. Plus, a pet-sitter is staying there this week.

Sophie’s been thinking about lunch all week. Today’s lunch, specifically. Last November, after Susan and I picked her up at college for winter break, we stopped in a charming town for lunch—Bennington, Vermont. A deli was open, carryout only, Covid and all. The sandwiches we bought featured fresh, unique ingredients and tasted fantastic, but it took about forty-five minutes to prepare our order. These days, apparently, all roads point north. Our route today traveled right through Bennington. This time, we called ahead.

No one in my family likes to be the one to call in a carryout order. We all sat quietly in the car waiting for someone else to pick up their phone. Susan looked like she would call it in, but after a minute or so, she claimed her phone wouldn’t work, so me, the guy with hearing impairment and a track record of confusing and awkward phone conversations, I took my turn.

I don’t know if it’s my voice or my timing, but it always goes badly. This time, long silences punctuated the conversation where I waited for the guy on the phone to respond to something I said.

I’d like the Turkey Rachel, the Trail Chix, and a corn and bean quesadilla. Can you hold the jalapenos?

Silence. Ten seconds later, annoyed, he responded: Are you still there?

Yes, can you hold the jalapenos?

Calling ahead proved to be a good plan. That’ll be ready in a half an hour.

Thirty-five minutes later, we walked into the restaurant. The woman at the register sounded pissed: Are you eating here??!

When I gave my name, one of the guys making sandwiches, the same guy who told me our order would be ready in a half an hour thirty-five minutes earlier, shouted out: You’re early! Come back in a half an hour!

We canceled our order and went across town to the Elm Street Market instead. Wow. If you’re ever in Bennington, VT, this is the place to go for lunch. The staff was friendly, and the order only took about fifteen minutes to make. Later, driving down the road, everyone making yum sounds, talking with full mouths “Man, this is great.”  My wrap, curried chicken with goat cheese and spinach was easily the best sandwich I’ve had in years. Maybe in my life.

The rest of the ride was perfect. The deeper we got into eastern Vermont and then New Hampshire and finally Maine, the more beautiful the landscape became. Layered, forested mountains every direction we looked. It seemed as if we perpetually drove through a mountain rimmed bowl. And crossing into Maine, we saw a moose standing in a marsh.

For the most part, a fine start to a long-anticipated vacation.

The post All Roads Point North appeared first on The Good Men Project.