We all want to build the next (or perhaps the first) great Augmented Reality app. But there be dragons! The space is new and not well defined. There aren’t any AR apps that people use every day to serve as starting points or examples. Your new ideas have to compete against an already very high quality bar of traditional 2d apps. And building a new app can be expensive, especially for native app environments. This makes AR apps still somewhat uncharted territory, requiring a higher initial investment of time, talent and treasure.

But this also creates a sense of opportunity; a chance to participate early before the space is fully saturated.

From our point of view the questions are: What kinds of tools do artists, developers, designers, entrepreneurs and creatives of all flavors need to be able to easily make augmented reality experiences? What kinds of apps can people build with tools we provide?

For example: Can I watch Trevor Noah on the Daily Show this evening, and then release an app tomorrow that is a riff on a joke he made the previous night? A measure of success is being able to speak in rich media quickly and easily, to be a timely part of a global conversation.

With Blair MacIntyre‘s help I wrote an experiment to play-test a variety of ideas exploring these questions. In this comprehensive post-mortem I’ll review the app we made, what we learned and where we’re going next.

To answer some of the above questions, we started out surveying AR and VR developers, asking them their thoughts and observations. We had some rules of thumb. What we looked for were AR use cases that people value, that are meaningful enough, useful enough, make enough of a difference, that they might possibly become a part of people’s lives.

Existing AR apps also provided inspiration. One simple AR app I like for example is AirMeasure, which is part of a family of similar apps such as the Augmented Reality Measuring Tape. I use it once or twice a month and while not often, it’s incredibly handy. It’s an app with real utility and has 6500 reviews on the App Store – so there’s clearly some appetite already. 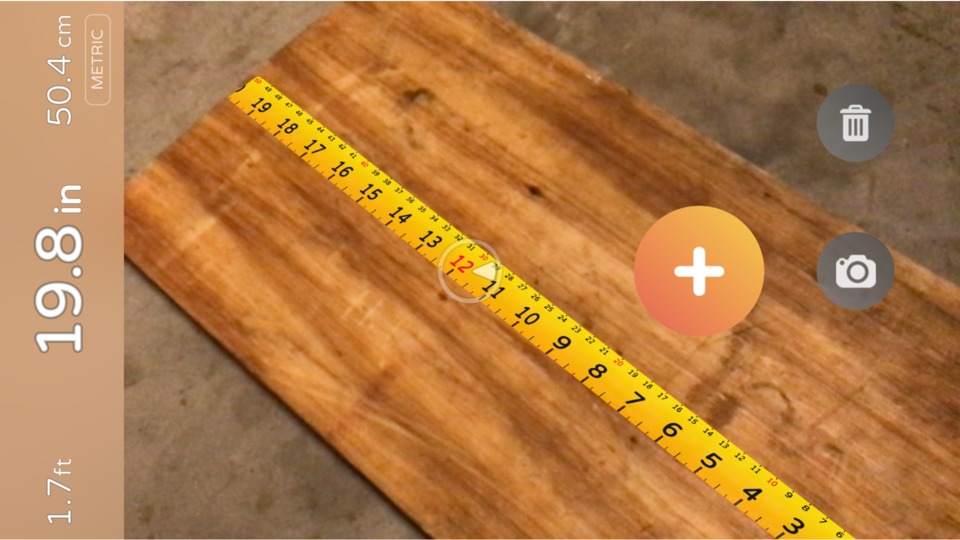 Sean White, Mozilla’s Chief R&D Officer, has a very specific definition for an MVP (minimum viable product). He asks: What would 100 people use every day?

When I hear this, I hear something like: What kind of experience is complete, compelling, and useful enough, that even in an earliest incarnation it captures a core essential quality that makes it actually useful for 100 real world people, with real world concerns, to use daily even with current limitations? Shipping can be hard, and finding those first users harder.

New Pixel phones, iPhones and other emerging devices such as the Magic Leap already support Augmented Reality. They report where the ground is, where walls are, and other kinds of environment sensing questions critical for AR. They support pass-through vision and 3d tracking and registration. Emerging standards, notably WebXR, will soon expose these powers to the browser in a standards- based way, much like the way other hardware features are built and made available in the browser.

Native app development toolchains are excellent but there is friction. It can be challenging to jump through the hoops required to release a product across several different app stores or platforms. Costs that are reasonable for a AAA title may not be reasonable for a smaller project. If you want to knock out an app tonight for a client tomorrow, or post an app as a response to an article in the press or a current event— it can take too long.

With AR support coming to the browser there’s an option now to focus on telling the story rather than worrying about the technology, costs and distribution. Browsers historically offer lower barriers to entry, and instant deployment to millions of users, unrestricted distribution and a sharing culture. Being able to distribute an app at the click of a link, with no install, lowers the activation costs and enables virality. This complements other development approaches, and can be used for rapid prototyping of ideas as well.

In our experiment we explored what it would be like to decorate the world with virtual post-it notes. These notes can be posted from within the app, and they stick around between play sessions. Players can in fact see each other, and can see each other moving the notes in real time. The notes are geographically pinned and persist forever.

Using our experiment, a company could decorate their office with hints about how the printers work, or show navigation breadcrumbs to route a bewildered new employee to a meeting. Alternatively, a vacationing couple could walk into an AirBNB, open an “ARBNB” app (pardon the pun) and view post-it notes illuminating where the extra blankets are or how to use the washer.

We had these kinds of aspirational use case goals for our experiment:

Here’s a short video of the app running, which you might have seen some days ago in my tweet:

And more detail on how to use the app if you want to try it yourself:

Here’s an image of looking at the space through the iPhone display:

And an image of two players – each player can see the other player’s phone in 3d space and a heart placed on top of that in 3d:

You’ll need the WebXR Viewer for iOS, which you can get on the iTunes store. (WebXR standards are still maturing so this doesn’t yet run directly in most browsers.)

This work is open source, it’s intended to be re-used and intended to be played with, but also — because it works against non-standard browser extensions — it cannot be treated as something that somebody could build a commercial product with (yet).

The videos embedded above offer a good description: Basically, you open ARPersist, (using the WebXR viewer linked above on an iPhone 6s or higher), by going to the URL (arpersist.glitch.me). This drops you into a pass-through vision display. You’ll see a screen with four buttons on the right. The “seashell” button at the bottom takes you to a page where you can load and save maps. You’ll want to “create an anchor” and optionally “save your map”. At this point, from the main page, you can use the top icon to add new features to the world. Objects you place are going to stick to the nearest floor or wall. If you join somebody else’s map, or are at a nearby geographical location, you can see other players as well in real time.

This app features downloadable 3d models from Sketchfab. These are the assets I’m using:

Coming out of that initial phase of development I’ve had many surprising realizations, and even a few eureka moments. Here’s what went well, which I describe as essential attributes of the AR experience:

We also identified many challenges. Here are some of the ones we faced:

Here’s where I feel this work will go next:

This research wasn’t just focused on user experience but also explored internal architecture. As a general rule I believe that the architecture behind an MVP should reflect a mature partitioning of jobs that the fully-blown app will deliver. In nascent form, the MVP has to architecturally reflect a larger code base. The current implementation of this app consists of these parts (which I think reflect important parts of a more mature system):

An architectural observation regarding geolocation of all objects

One other technical point deserves a bit more elaboration. Before we started we had to answer the question of “how do we represent or store the location of virtual objects?”. Perhaps this isn’t a great conversation starter at the pub on a Saturday night, but it’s important nevertheless.

We take so many things for granted in the real world – signs, streetlights, buildings. We expect them to stick around even when you look away. But programming is like universe building, you have to do everything by hand.

The approach we took may seem obvious: to define object position with GPS coordinates. We give every object a latitude, longitude and elevation (as well as orientation).

But the gotcha is that phones today don’t have precise geolocation. We had to write a wrapper of our own. When users start our app we build up (or load) an augmented reality map of the area. That map can be saved back to a server with a precise geolocation. Once there is a map of a room, then everything in that map is also very precisely geo-located. This means everything you place or do in our app is in fact specified in earth global coordinates.

Blair points out that although modern smartphones (or devices) today don’t have very accurate GPS, this is likely to change soon. We expect that in the next year or two GPS will become hyper-precise – augmented by 3d depth maps of the landscape – making our wrapper optional.

Our exploration has been taking place in conversation and code. Personally I enjoy this praxis — spending some time talking, and then implementing a working proof of concept. Nothing clarifies thinking like actually trying to build an example.

At the 10,000 foot view, at the idealistic end of the spectrum, it is becoming obvious that we all have different ideas of what AR is or will be. The AR view I crave is one of many different information objects from many of different providers — personal reminders, city traffic overlays, weather bots, friend location notifiers, contrails of my previous trajectories through space etc. It feels like a creative medium. I see users wanting to author objects, where different objects have different priorities, where different objects are “alive” — that they have their own will, mobility and their own interactions with each other. In this way an AR view echoes a natural view of the default world— with all kinds of entities competing for our attention.

Stepping back even further — at a 100,000 foot view — there are several fundamental communication patterns that humans use creatively. We use visual media (signage) and we use audio (speaking, voice chat). We have high-resolution high-fidelity expressive capabilities, that includes our body language, our hand gestures, and especially a hugely rich facial expressiveness. We also have text-based media — and many other kinds of media. It feels like when anybody builds a communication medium that easily allows humans to channel some of their high-bandwidth needs over that pipeline, that medium can become very popular. Skype, messaging, wikis, even music — all of these things meet fundamental expressive human drives; they are channels for output and expressiveness.

In that light a question that’s emerging for me is “Is sharing 3D objects in space a fundamental communication medium?”. If so then the question becomes more “What are reasons to NOT build a minimal capability to express the persistent 3d placement of objects in space?”. Clearly work needs to make money and be sustainable for people who make the work. Are we tapping into something fundamental enough, valuable enough, even in early incarnations, that people will spend money (or energy) on it? I posit that if we help express fundamental human communication patterns — we all succeed.

What’s surprising is the power of persistence. When the experience works well I have the mental illusion that my room indeed has these virtual images and objects in it. Our minds seem deeply fooled by the illusion of persistence. Similar to using the Magic Leap there’s a sense of “magic” — the sense that there’s another world — that you can see if you squint just right. Even after you put down the device that feeling lingers. Augmented Reality is starting to feel real.

LaptrinhX
—
Augmented Reality and the Browser — An App Experiment
Share this