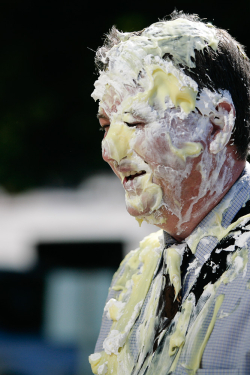 I remember a time early in my career where at one employer we had an unusual employee working in our department, a Business Analyst who was considered quite a character.  A long way from being a stylish dresser, he didn't have much in the way of social skills (was a bit of a loner, in fact), wasn't what anyone would call "attractive" and as a result, always seemed to be the odd man out in our group.

Once when I commented about yet another display of public eccentricity my boss chided me with "Bob is brilliant, and a top performer.  Just deal with it."  The point being made was, this is an exceptional talent that the organization values.  Ours is not a social club, so ignore the surface veneer as simply not being that important to the business.

I learned a lesson that day.

But that was then, quite a while ago.  Today, eccentric Bob might find himself in a less friendly environment, and might even be pushed out the door, simply because management wouldn't want to "deal with it."

In many organizations today if Bob doesn't fit in, he's gone.  Focusing on performance and results don’t seem to be enough anymore.  Or perhaps that’s not considered as important by elements of senior leadership.  Not as important as "fit."

Each employee can measure themselves and can be measured by others, in accordance with three elements of successful employment experience.  The Organization & Development folks call this P.I.E.

These elements haven't changed over the years and are just as much in play today as when I was told that I would have to deal with Bob.  However, the importance and relative weight of each element have evolved.

In many organizations today, especially amongst the leadership, the combination of an employee's image and exposure (network) is often more important to their future in that organization than whether they're doing a good job.  That bears repeating, as at first glance it seems like the world has turned upside down.

Time and again we see that "fit" trumps performance.  Those employees who have likes, hobbies and personalities that are like the "group think" are increasingly viewed as more successful in their organizations than other employees who lack a similar persona and who can only offer high performance.

No, you say, that can't be right.  And maybe in your experience - well, you've been more fortunate.  But what I'm describing does happen.  And it happens a lot.

For example, a colleague of mine doesn’t play golf and doesn’t gamble.  And while he claims no value judgment about either interest neither are they his "thing.”  He has other “things.”  However, for one employer those personal preferences formed a negative combination that ultimately steered him toward the exit door.  He didn’t fit in.  Senior management loved to play golf, and they'd schedule conferences where gambling was readily available.  My colleague went to the shows instead.

Now if you're thinking "there must be more to this," one week prior to hearing that he didn't fit in he had received a "high performer" rating on his annual performance review.   Regardless, he was encouraged to look elsewhere.

Now some might not think that that sample experience was so bad.  Following that vein of thought, in order to form a collaborative environment, companies need people who have a degree of “simpatico” with each other.  Thus, if your persona isn't perceived as "in sync" with the leadership group your Image and Exposure will suffer to the point of damaging your career prospects - at least with this employer.

And doing a great job may not be enough to make up for your other personal failings.

What Can You Do?

Shoveling sand against the tide is never an effective strategy.  Nor is thinking that an individual can unilaterally change the culture of an organization.  So you either quit or you put up with your status - just as they put up with you.

So have a care.  Think about your own working environment in terms of Performance, Image, and Exposure.  If you're comfortable being in a high-performance role, perhaps you shouldn't be quite so relaxed.  It may not be enough.  You just might get surprised with a P.I.E. in the face.

Chuck Csizmar CCP is founder and Principal of CMC Compensation Group, providing global compensation consulting services to a wide variety of industries and non-profit organizations.  He is also associated with several HR Consulting firms as a contributing consultant.  Chuck is a broad based subject matter expert with a specialty in international and expatriate compensation.  He lives in Central Florida (near The Mouse) and enjoys growing fruit and managing (?) a clowder of cats.

LaptrinhX
—
Being Hit in The Face with a P.I.E.
Share this