Broadcom has begun commercial shipments of its 25.6 Tbps StrataXGS Tomahawk 4 Ethernet switching silicon -- representing double the bandwidth of any other switch silicon currently on the market.

Tomahawk 4, which is implemented in 7nm technology with 512 50G PAM4 SerDes, arrives less than two years after the previous 12.8Tbps product generation. 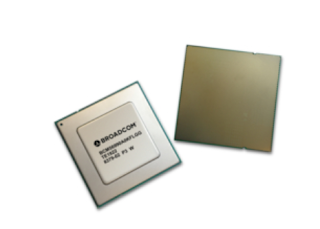 Tomahawk 4 is designed for the backbone for the next generation of hyperscale data center networks.

Broadcom said its Tomahawk 4 accelerates the adoption of 100/200/400GbE Ethernet solutions at a point where optics utilizing 50G PAM4 electrical connectivity are shipping in high volumes.

“The Tomahawk franchise is the flagship for cutting-edge, single-chip performance and integration among Broadcom’s multi-vectored Ethernet switch silicon portfolio, tailored to the unique and rigorous demands of hyperscale data center operators,” said Ram Velaga, senior vice president and general manager, Core Switching Group, Broadcom. “We are proud of our world-class engineering team for innovating and delivering the 25.6Tbps Tomahawk 4 chip in less than two years after we released Tomahawk 3.  Broadcom is proving yet again that customers can rely on us to lead the industry on switch silicon performance and execution at every generation.”