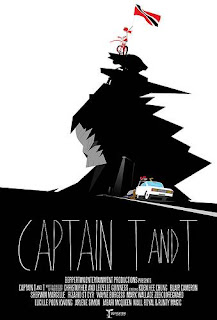 If you think that the superhero genre has had its day, run its course and is lying on the ground panting and out of breath then think again – here’s a different take which I suspect will make your day – it certainly did mine.  Many young boys have superhero ambitions (come on, yes you did) and Thin Foot is certainly one of those, producing a list of potential powers to be tried and tested – even if the result is not quite how he had hoped.  Yet despite his various disappointments in the superhero power department this little guy just keeps battling on.  Call me a big soppy sopster but I had a tear in my eye at the end.

The visuals of Captain T&T (for Trinidad and Tobago, the island nation in which Thin Foot lives) are stunning.  I would call parts of this movie experimental were it not for the incredibly strong narrative thread which runs through it.  The animated segment at the center of the film was a surprise but works wonderfully within the context of the film as a whole.  Plus the directors have elicited incredibly strong performances from their young cast, particularly Kden Hee Chung as Thin Foot.

Captain T&T was written, directed and produced by Christopher and Leizelle Guiness. This film has been described as the best to ever be home produced in the Caribbean.  Watch it and see why.