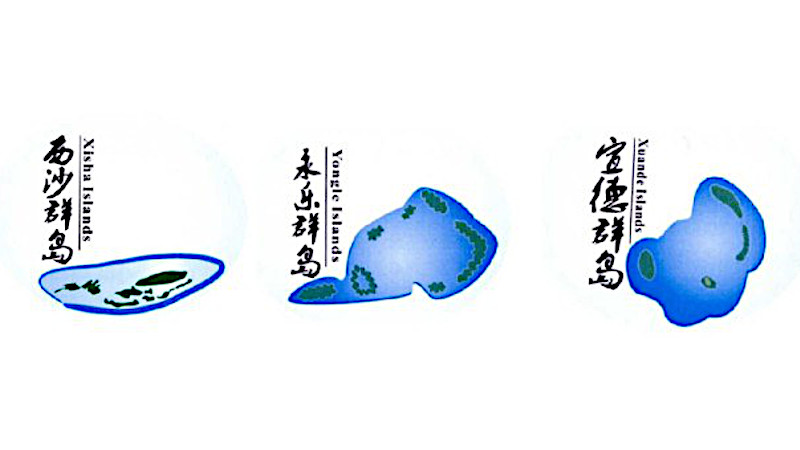 Not content with claiming sovereignty over nearly every crag of rock and spit of sand in the South China Sea, China has taken the unusual step of registering trademarks over hundreds of land features scattered throughout those disputed waters, a BenarNews investigation has found.

That action is meeting with disapproval from other South China Sea claimants. Taiwan and Vietnam have rejected the legitimacy of the trademarks, which experts described as a possible attempt by the People’s Republic of China to control how domestic and even foreign companies use South China Sea branding.

Unlike most of China’s assertive behavior in the South China Sea, the trademark registrations largely slipped under the radar when they were initiated seven years ago. But now a review of Chinese government records from 2014 by BenarNews has revealed that Sansha City – which is responsible for administering China’s claims in the South China Sea – filed thousands of domestic trademark applications covering 281 specific rocks, reefs, shoals and other contested features as well as entire regions of the South China Sea.

Each of these trademarks is composed of the feature’s name in stylized Chinese calligraphy and is categorized under one of 45 international trademark classes, which cover everything from musical instruments to legal services. Many also include an English transliteration of the feature’s name and an illustrated logo that offers a colorful view of the feature as seen from above.

The depiction of features appears to predate China’s massive campaign of land reclamation in the Paracel and Spratly islands which kicked off in 2014.

Julian Ku, a professor at the Maurice A. Deane School of Law at Hofstra University, said these trademarks could potentially help the Chinese government wield lawsuits to control how Chinese and foreign companies use South China Sea branding.

He said that this would be a form of “lawfare” – China’s use of domestic and international law to advance its position in the disputes.

China contends that it holds sovereignty over hundreds of features across the entire South China Sea as well as extensive rights to its waters, a position not supported by international law. Its claims are contested by several neighboring countries, though it does not appear that those countries, including Vietnam and the Philippines, have registered comparable trademarks.

In response to a request for comment on China’s trademarks, an official at the Vietnamese Embassy in Washington told BenarNews that “every way to spread information that is against international law and historical truth is valueless and unlawful, as well as will not be able to change the truth about Viet Nam’s sovereignty over Hoang Sa [Paracels] and Truong Sa [Spratlys].”

The commercial use of South China Sea imagery – particularly maps – has long been a source of tension between the rival claimants. The inclusion of China’s controversial nine-dash line on a map in DreamWorks’ 2019 film “Abominable,” for example, caused authorities in the Philippines, Vietnam and Malaysia to ban the film.

And just last week, Vietnamese Ministry of Foreign Affairs spokeswoman Le Thi Thu Hang said that “companies operating in Vietnam must respect and strictly comply with the laws of Vietnam,” criticizing foreign brands that include China’s nine-dash line in maps on their products.

It is clear from official commentary on the issue that China sees intrinsic value in asserting commercial rights over what are disputed territories. Quoting a Sansha City official, state-run China Industry and Commerce News reported in 2016 that “applying to register trademarks for the names of Sansha City’s islands and reefs in accordance with China’s ‘Trademark Law’ was the most direct embodiment of declaring sovereignty.”

Sansha City also registered these trademarks to “protect the geographical name ownership of each island, reef, shoal and island” and “prevent trademark squatting,” China Industry and Commerce News said, referring to when one entity preemptively registers another entity’s trademark, effectively stealing it.

Claiming every last rock and reef

The 281 features trademarked by Sansha City largely match the list of 287 features that China named and claimed in 1983, which was expanded in April 2020.

It trademarked rocks and reefs in the Spratly Islands too, including features controlled by other claimant states like Taiwan-occupied Itu Aba, Philippines-occupied Thitu Island, and Vietnam-occupied Sin Cowe Island.

Taiwan’s Mainland Affairs Council said this week that it has unquestionable sovereignty over Itu Aba as well as long-term effective governance over the island. The council said that China’s trademarks are inconsistent with international standards and criticized them as a deliberate attempt to create a false image of Chinese jurisdiction over Itu Aba.

Tensions between Taiwan and the China over their competing South China Sea claims have been increasingly high in recent weeks as China has operated drones and military aircraft near Taiwan-occupied Pratas Island.

Sansha City has not in fact registered a trademark for Pratas, but it has for other disputed features that have been in the news lately. Among them are Scarborough Shoal and Whitsun Reef – each the location of a standoff between China and the Philippines, the first at Scarborough in 2012 and the second at Whitsun in March 2021.

The presence of hundreds of Chinese fishing or militia ships at Whitsun Reef generated significant diplomatic pushback from Manila in late March and on Tuesday prompted Manila to summon China’s ambassador to the Philippines. It has also drawn statements of concern and condemnation from Washington, Hanoi, Canberra, London, and other capitals.

Chinese government records show that Sansha City has applied for at least 2,675 trademarks, with all but a handful of applications submitted in 2014. Most but not all of these applications appear to have been successfully approved.

In 82 instances, Sansha City trademarked a feature more than once, sometimes filing trademarks under each of the 45 international trademark classes for a single feature. It also trademarked Scarborough Shoal under two separate names, submitting 45 trademark applications for “Huangyan Island” and 45 for “Minzhu Reef.”

Despite China registering the trademarks seven years ago, they do not appear to have been used widely – with one exception. The “Sansha” logo that the city trademarked can be spotted on the city’s supply ships, its website and podiums used by the municipal government. “Sansha” refers to the Xisha Islands, Nansha Islands and Zhongsha Islands, which are China’s names for the Paracel and Spratly islands, Scarborough Shoal, and Macclesfield Bank.

Ku said the legal implications of these trademarks are not entirely clear.

“Trademarks are legal protections for the use of names or logos for commercial purposes,” which means that “trademarks would not generally be understood to bolster a country’s sovereignty claims under international law,” he said.

Moreover, Ku said that “trademarks are generally recognized first under domestic law and you have to register for a trademark country-by-country” and “each country still has the right to reject the trademark registration for domestic legal reasons.”

Ku also questioned whether such geographical locations can even be trademarked.

“There are protections in U.S. and in international law for geographical indications when associated with (typically) food products such as ‘Champagne’ but trademarking the land feature without any particular product is new to me and I think somewhat uncertain under most countries’ trademark laws,” he said.

Despite these limitations, these trademarks could still be useful for the Chinese government.

For example, these trademarks may have allowed the Chinese government to block unapproved commercial use of South China Sea branding by Chinese companies.

Ku said that these trademarks could also be intended to deter foreign companies from using South China Sea branding.

He said “if any company tried to market a product with a land feature name associated with it, in theory, a Chinese trademark holder would be able to sue.”

“But since I think it is unlikely that other countries would recognize these trademark claims by China, I am not as worried,” Ku said.

He also noted that the Chinese government only trademarked the Chinese names of these features – as well as English transliterations – rather than their widely recognized names in other languages, likely further limiting the international impact of these trademarks.

“Still, even the potential of harassing litigation could be a meaningful deterrent,” Ku said.

Imran Vittachi in Washington, Jason Gutierrez in Manila and Hwang Chun-Mei in Taipei contributed to this report.