If you like to watch videos on your mobile device, and use Chrome for that, you may benefit from improvements that Google implemented in Chrome 52.

Google started to roll out the new Chrome 52 release for Android on July 27 and the roll out is still ongoing at the time of writing.

Google promises that Chrome users will experience smoother playback and faster load times for one. The company created a video that shows the old and new version of Chrome side by side when loading and playing the same video.

The load time improved by the factor five according to Google but mileage may vary as always. While a factor of five sounds impressive, it simply means that videos will load in less than a second now instead of about a second.

Google also mentioned that battery will last longer but did not reveal why that is the case.

With the release of Chrome 52 on Android, video playback has been improved for speed and power efficiency. This means you will see smoother playback and faster load times. Videos will now start playing sooner, instead of pausing briefly before loading, and your battery will last longer.

Another improvement is that Chrome's Data Saver Mode works for videos as well now. Users may save up to 50% of data when Data Saver Mode is enabled in Chrome when they are watching videos using the mobile browser.

This is achieved by showing a "lightweight version of the video". Google notes that the improvements are most noticeable on short videos. 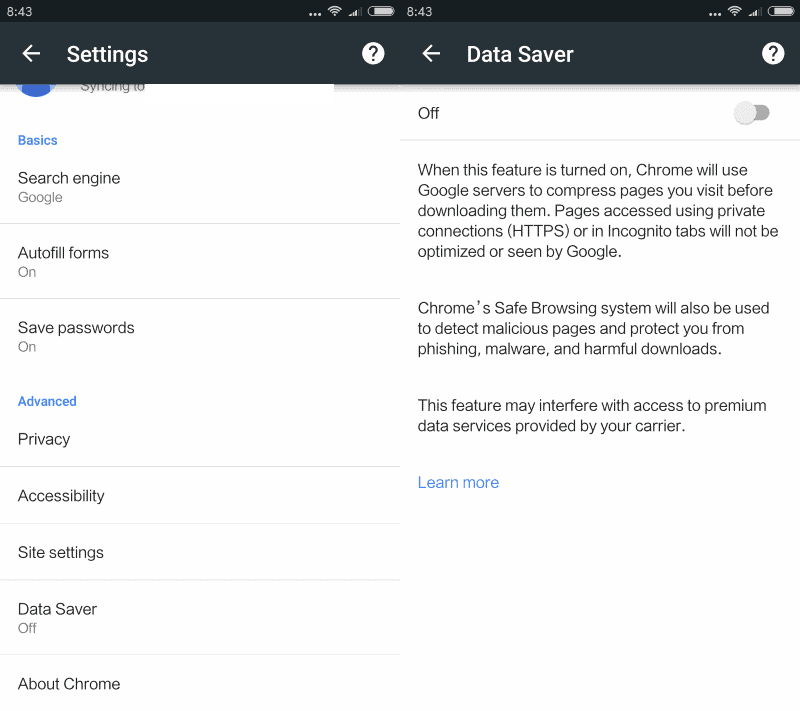 To enable Data Saver on Chrome for Android do the following:

Note: All regular traffic (http) is tunneled through Google servers when enabled. Google compresses and optimizes these pages before they are sent to the mobile device.

Opera's data compression technology offers similar functionality. Users may either install Opera Max as a standalone application, or enable it directly in the web browser.

Video is highly popular and there is little doubt that the popularity won't fade away any time soon. Better battery life -- even though it is not clear how much better -- as well as faster load times and data savings will certainly be welcome by Chrome users who watch videos regularly on their mobile Android device.