Star Wars Day might be getting more expensive than Christmas. Whenever May the 4th rolls around, you can always expect to open up your bank account for some new Star Wars merchandise, and today is no different thanks to a batch of new collectibles unveiled by the quality creators at Hot Toys and Sideshow Collectibles.

Hot Toys has unveiled a trio of new figures (including a gnarly steed) inspired by the live-action Star Wars series The Mandalorian, as well as the animated series The Bad Batch. Meanwhile, Sideshow Collectibles is digging into The Clone Wars and Star Wars Rebels with new statues of Anakin Skywalker, Obi-Wan Kenobi and Ahsoka Tano. Check them all out below, and be prepared to weep for your wallet. 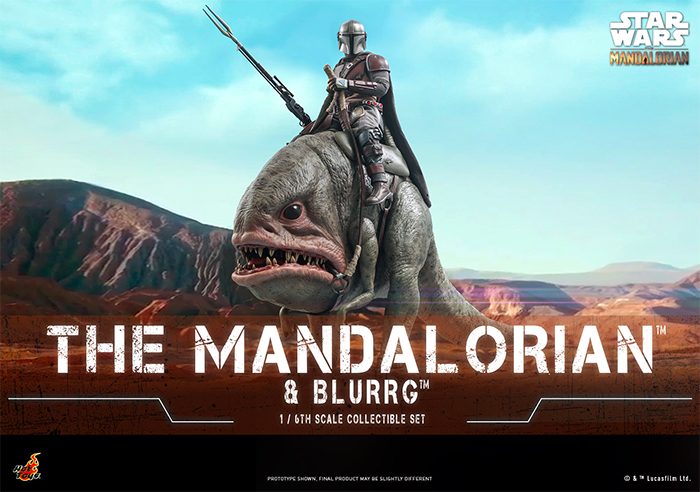 “You are a Mandalorian! Your ancestors rode the great Mythosaur. Surely you can ride this young foal.”

Returning to the beginning of The Mandalorian’s story, Star Wars witnessed the eponymous bounty hunter took on a mysterious bounty from a client to search for an asset on the desert planet of Arvala-7. Upon arrival, Mandalorian was assisted by Kuiil the Ugnaught and learned to ride the blurrg in order to reach the settlement seeking the valuable asset.

Fans were instantly captivated by the unfolding of the Mandalorian’s journey, and in celebration of Star Wars Day, Hot Toys is excited to present a special 1/6th scale collectible set featuring the Mandalorian in his original armor and the Blurrg! 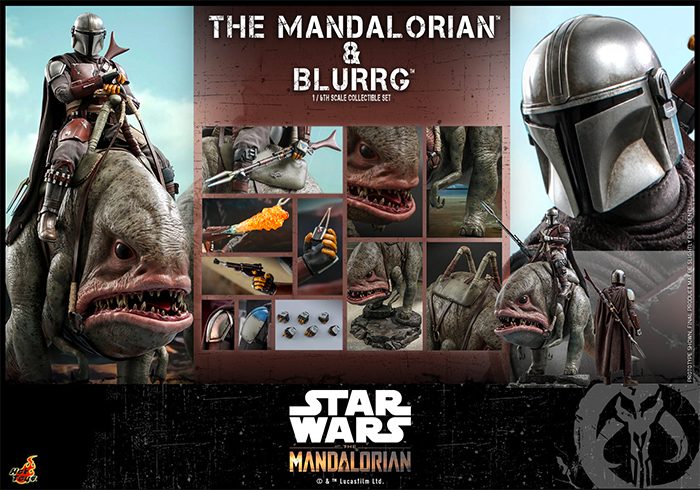 First up, we have The Mandalorian and the gnarly steed known as the blurrg. Mando himself comes with crafted helmet and armor pieces, finely tailored outfit, special weathering effects, a blaster rifle, a blaster pistol, and display base. Meanwhile, the blurrg (which you can also purchase separately if you already have The Mandalorian Hot Toys figure) features a detailed head and body, articulated arms, a saddle, and a rocky-themed display stand.

The Mandalorian set with both Mando and the blurrg costs $555, but the blurrg by itself only costs $315. You can pre-order now and the figures will ship sometime between April and June of 2022. 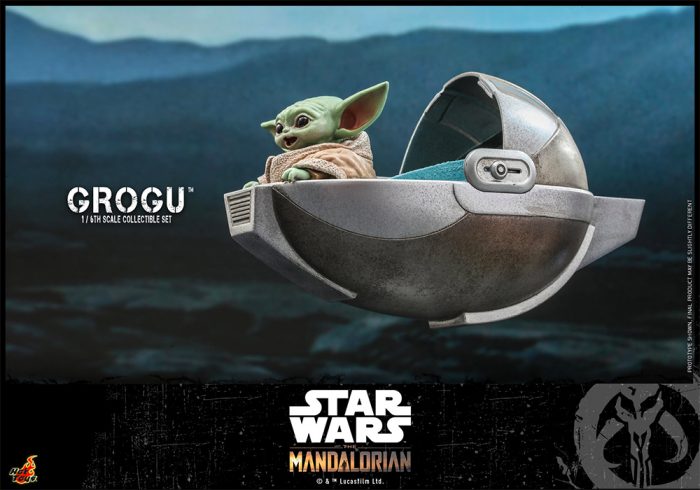 “It is a foundling. By creed, it is in your care.”

The highly acclaimed Star Wars live action series The Mandalorian has introduced us to a widely beloved character, Grogu, the mysterious alien child pursued by bounty hunters on behalf of Imperial interests. 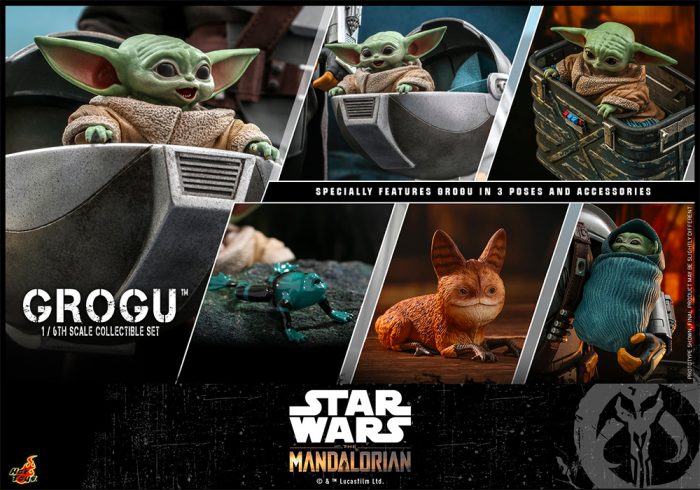 Next up, the alien child Grogu is getting a new 1/6 scale figure to accompany Mando. In fact, this collectible set features three different versions of the Force-sensitive creature. One is wrapped in a blanket, another has a normal expression and sits and the other has an open-mouthed expression and sits. The latter two have a magnetic function to sit securely in the two different prams. Plus, there’s also a loth-cat and a one-eyed frog for Grogu to play with.

Pre-order the new Hot Toys Grogu figure set for $145 and it will arrive sometime between January and March of 2022. 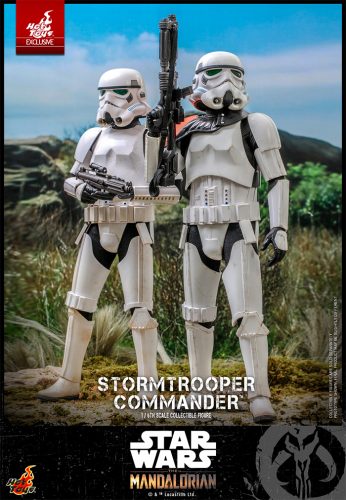 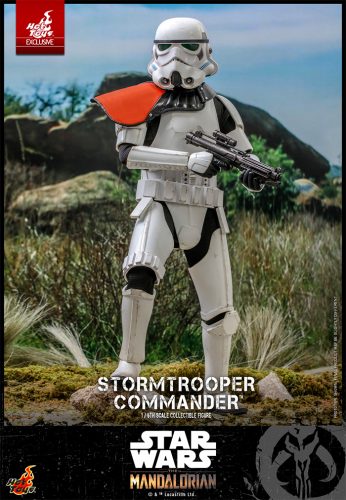 When the Mandalorian brought the alien foundling Grogu to the planet of Tython in order to reach other Jedi, they were tracked by Moff Gideon and a unit of remnant Stormtroopers were sent to capture the child.

In celebration of Star Wars Day, Hot Toys is pleased to present a new 1/6th scale collectible figure of the Stormtrooper Commander from The Mandalorian as an exclusive item! 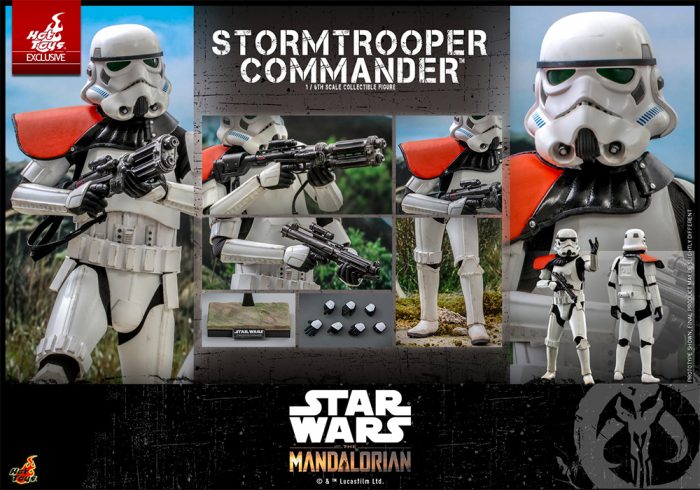 Finally, wrapping up the Mandalorian Hot Toys, we have a Stormtrooper Commander from the second season of the series. The trooper leader comes with detailed helmet and armor with weathering effects, the commander’s orange pauldron, a black under-suit, two styles of blaster rifles, and a display base. He’s fully prepared to have his ass kicked by Mando and Boba Fett.

You can pre-order the Stormtrooper Commander figure for $220, and it will arrive in the fourth quarter this year. 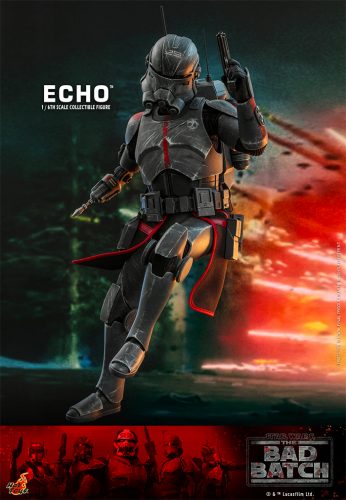 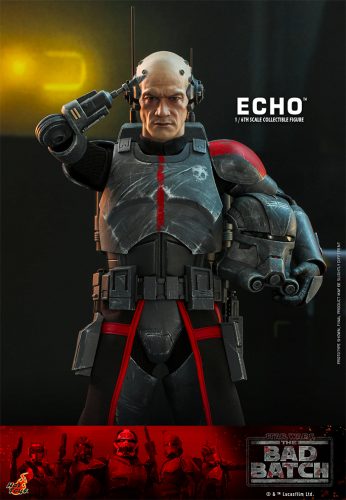 Former ARC Trooper Echo joined the Bad Batch towards the end of the Clone Wars after his rescue from the Techno Union. Echo’s knowledge of proper military tactics and strategy provides valuable insight, while his socket-arm and cybernetic implants give him the unique ability to interact with computer system.

In celebration of Star Wars Day and The Bad Batch animation series’ debut, Hot Toys is excited to introduce the 1/6th scale collectible figure of Echo inspired by Star Wars: The Bad Batch! 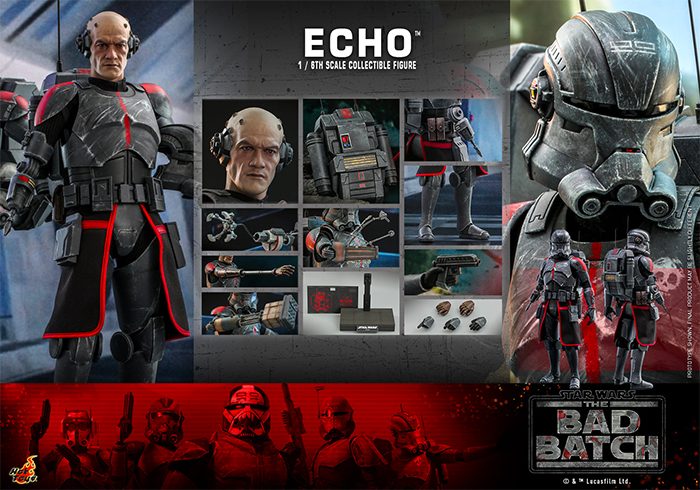 Shifting over to The Bad Batch, the first Hot Toys figure inspired by the animated series will be Echo. The unique Clone Trooper comes with Echo’s armor and helmet, interchangeable head sculpt, military backpack, blaster, display base, and a variety of cybernetic parts and mechanical right arms with various abilities.

Pre-order Echo right now for $285 and you’ll receive the figure sometime between April and June of 2022. 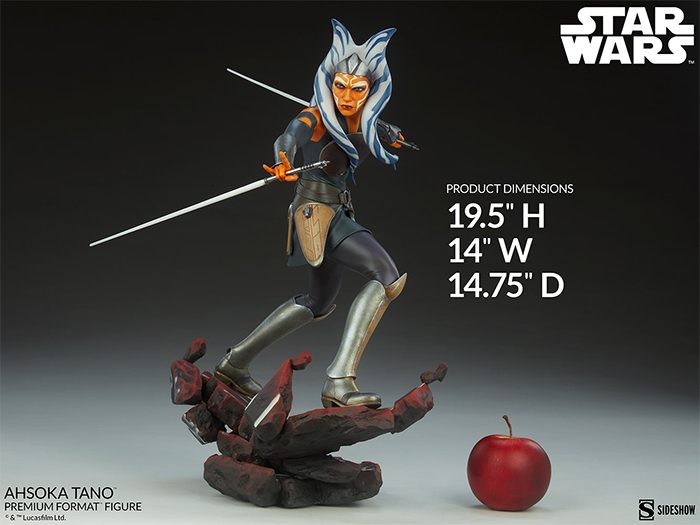 The polystone Ahsoka Tano Premium Format Figure is fully sculpted to capture the energy and action of her animated presence in a three-dimensional statue format. Ahsoka’s vibrant orange portrait bears her distinct white facial markings, and her face is framed by her white and blue patterned montrals and lekku. Her costume features a blue-grey bodysuit with sculpted skirts, belts, arm guards, shin guards, and detailed tan tassets at her hips. In her hands, her unique white-bladed sabers are unsheathed in anticipation of a fateful duel.

Inspired by Star Wars Rebels, Sideshow Collectibles has released a new premium format figure of Ahsoka Tano. She’s surrounded by a crumbling ancient temple with her lightsabers ready for battle. Unlike the Hot Toys figures, this is simply a detailed statue without any articulation.

You can pre-order the Ahsoka Tano premium format figure for $565 and it will ship between May and July of 2022. 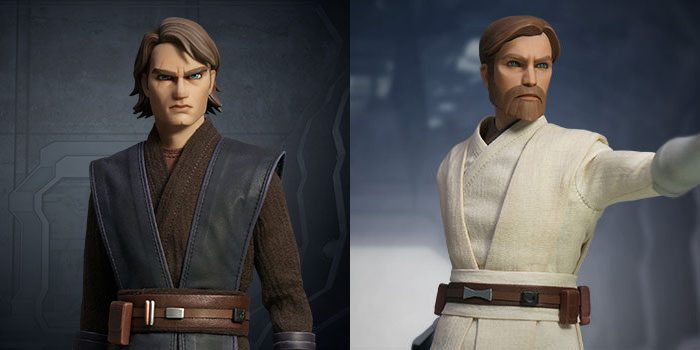 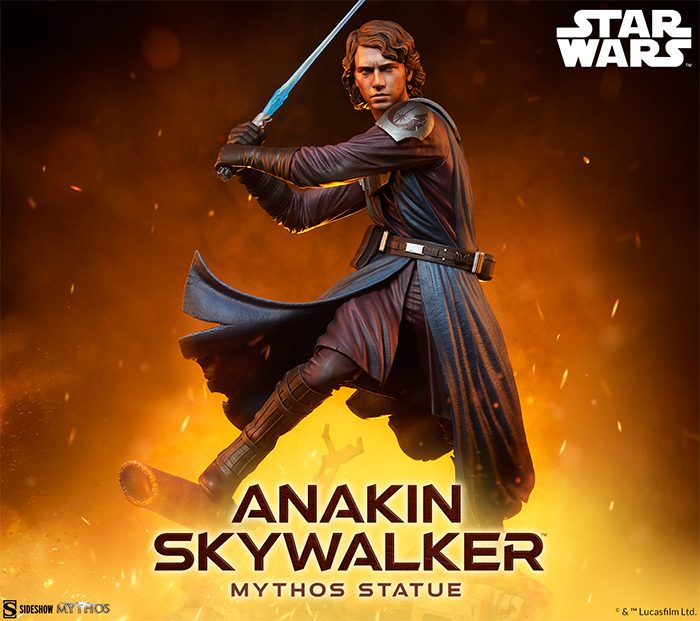 Finally, Sideshow also provided preview images of two new Clone Wars statues of both Anakin Skywalker and Obi-Wan Kenobi. On top of that, there’s a less stylized Mythos Statue of Anakin Skywalker inspired by his appearance during The Clone Wars. Since these are only preview images, there are no details about when these will be available for pre-order, so stay tuned.