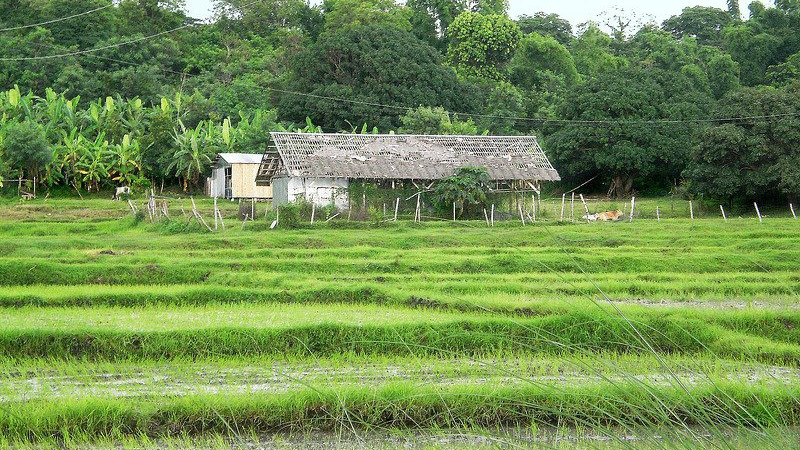 For an insight into the Luzon farmers’ fight for survival, come to this town’s vegetable trading post and read the graffiti.

A jeepney overloaded with potatoes from the vegetable mountain trail is splashed with this sign”: Crime does not pay, neither does farming.”

Closely following is an Elf truck, half careening to its right from the weight of cabbage. Above its windshield is written “Katas ng hirap sa pagsasaka.” Still, a Ford Fiera parked alongside the road marked with lousy writing says “Puro kayo katas, ito po ay utang”.

These signs as well as those marked on a mile-long traffic jeepneys, trucks and pick-ups that snarl daily to the trading center reflect the stark difficulty and trials of vegetable farmers in Northern Luzon. Many of the signs are literally meant, some philosophical, all in graffiti written as prayers, captions, one-liners or layman’s proverbs. They are printed in mudguards, dashboards, windshields, embroidered on tasseled curtains, painted on bumpers, rear ends and fenders.

Farming Is No Joke

They all have one meaning: Farming is no joke.

And the signs are meant to communicate to the powers that be the sad state of agriculture of the land, by farmers who are by nature meek, humble and uncomplaining.

For even as Benguet is dubbed the vegetable bowl of the country, the farmer behind the wheel of a rusty vehicle with his wife and four kids squeezed in between personifies the ailing vegetable industry.

“Farmers in Northern Luzon are faced with tremendous difficulties unknown before. Their crops are ravaged by persistent pests and diseases, dangerous pesticides and inorganic fertilizers with skyrocketing prices, adverse weather conditions and poor agricultural services technology”, says Dr. Carlos T. Buasen, former vice president and head of the agribusiness of the Benguet State University (BSU) and the coordinator of farming cooperatives.

“Add to these the vegetable cartel by middlemen who control and manipulate prices and what do you get?”, he asks. “A sick vegetable industry”, he adds, answering his own question.

No doubt, farming has never been as difficult as before. In this capital town alone, once dubbed as the “salad bowl of the Philippines”, farms have given way to commercial and residential establishments. The once proud Balili River that irrigated the fields are polluted of trash and human wastes from Baguio City, making residents say the town is now the “toilet bowl of Baguio.” By the time the vegetables get to Manila, these are five to six times more than their farm gate prices,” he says.

And farmers just can’t seem to put up an even fight against the middlemen. The reason? “Most farmers are indebted to middle men who supply farmers with seeds, pesticides and even food for the duration of farming. In return, the farmers are forced to agree sell their vegetables at a price dictated by the middlemen,” says Patrick Annanayo, former agriculturist of the Department of Agriculture.

Asked why there isn’t any strong federated vegetable cooperative which can fight for farmers’ rights, a provincial agricultural worker said, “The cooperative moment in the province us weak, partly because farmers are individualistic and, also past cooperativism efforts for marketing failed as in the case of the Benguet Area Marketing Cooperative Inc. which died in 1980s. The failure was traced to financial mismanagement.”

Which only proves what farmers say about cooperatives: “Kuha pera thieves met dayta” (roughly, it means cooperatives are only for the money).

One of the major factors behind the ailing farming industry is inadequate, if available, farming know-how. The farmers’ main source of agricultural information, a Benguet State University (BSU) study says, is the radio. In the province, it is provided by a Roman Catholic-run 10 megahertz radio station. But the information is dominated by advertisements from chemical companies who can pay for their air time to blatantly promote their expensive products and do not warn farmers of their products’ disadvantages.

Most of the technology us dependent on the use of expensive and dangerous chemicals. Know-how on sustainable agricultural systems which promote first and foremost food security is seldom taught and shared.

The BSU study says the next source of information are sales representatives and demonstrators of chemical products. Government agricultural technicians rank a poor fourth as information sources. The reasons are all too obvious.

“The terrain in Benguet and Mountain Province is difficult and many communities are inaccessible at all. It is rare for technicians to visit these communities,” says Isabel Dukias, a former technician.

The study said technicians of chemical companies have distinct advantage over poorly paid government agriculturists. In the conduct of farmers’ meetings and classes, chemical companies offer free samples, food shirts and other handouts. Thus, more farmers tend to go to them. Government workers cannot match that and often have few farmers in their meetings, the study said.

Dukias also says that “when we were devolved, only few technicians were left in each municipality. In our case, there are three of us. How then can we cover all the areas?” she reasons.

Lamentable is the technicians’s situation but what makes it more sad is the fact that most are generalists and are not specialists in their field.

In 1992, out of frustration because of the absence of a technology and insecticide that can kill the diamond back moth (DBM) that attack cabbage, farmers experimented by using cyanide against DBM successfully. The sad part is that cyanide kills humans, so the government stopped it. But it only shows that the government technicians cannot solve the problem.

Today, roses are dying from mites, chayote are shriveling under an unknown virus and potato fields are drying from a relentless attack by the leaf miners pest. Agricultulturists are racing against time, with little success, to end all these.

The farmers, howeverm remain persistent despite farming difficulties. They are resilient and trusting. As the theme of a truck’s graffiti says, “Apo Dios ti katulong ko idiay garden ko [God is my helper in my garden].”

Saying God is his only ally suggests how poor the government has become a farmer’s friend. Agricultural services like irrigation, farm-to-market roads and financing are wanting in many farming communities.

For instance, says a writing on a pick-up, “Wada koma nan pilak, ngem nakasalda met nan talak [I could have money but the truck has been mortgaged]” — an indication that many farmers’ trucks are mortgaged in banks just to finance farm operations.

Mainly because government financing for farm loans was drastically cut in 1995. The few banks that offer farming loans charge an exorbitant 40 percent.

LaptrinhX
—
Crime Does Not Pay, Neither Does Farming – OpEd
Share this