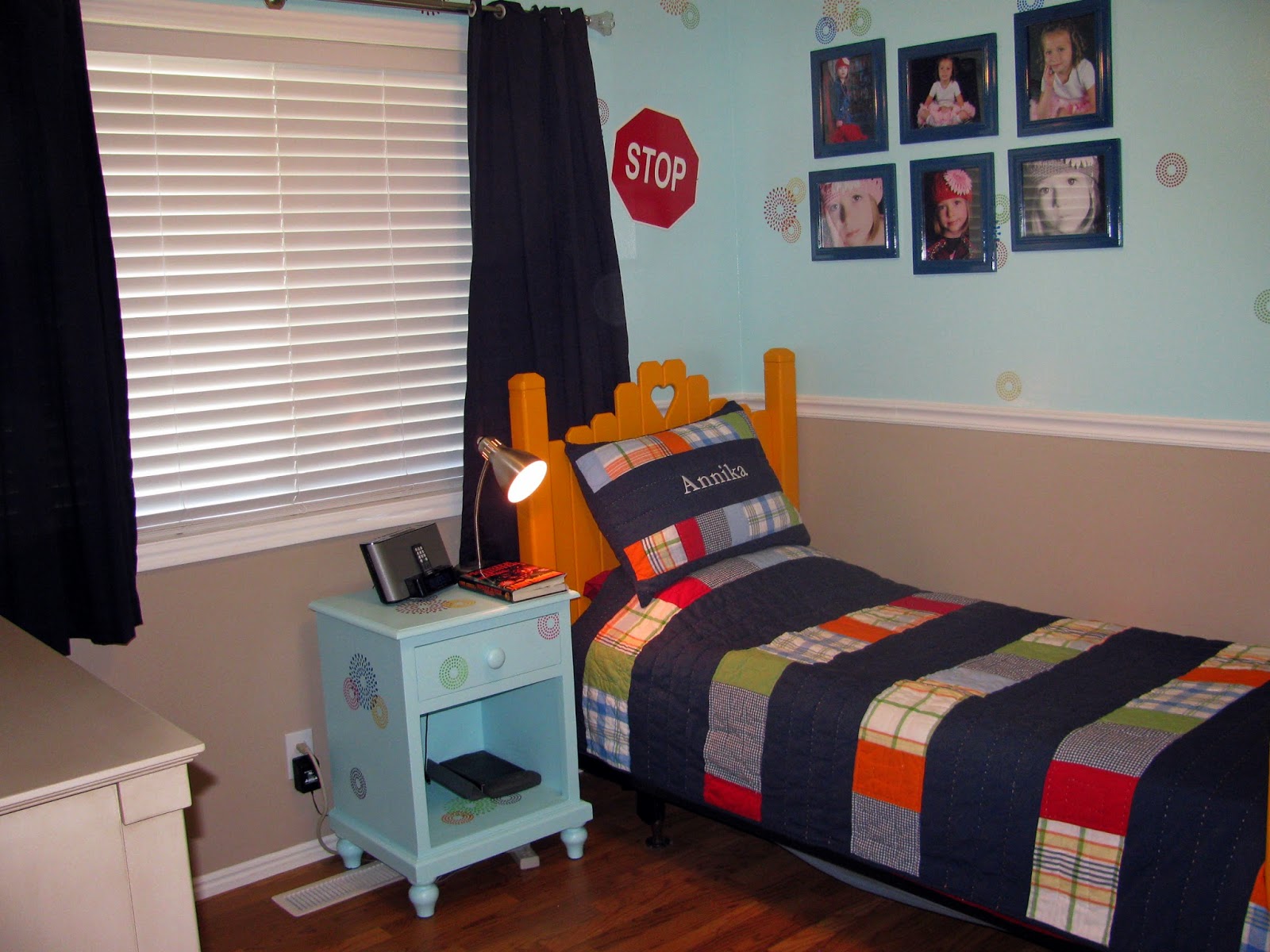 Stinkerbell's room is as done as it's going to get. I've done everything on my list except paint the toy box and frankly, that just might not happen. It's just not a priority at the moment, so like Zoe's magnet board, it could be a few years.
The first step to recovery is admitting you have a problem right?
So anyway, the curtains are up.
The ones you see have been modified because they started out like this. 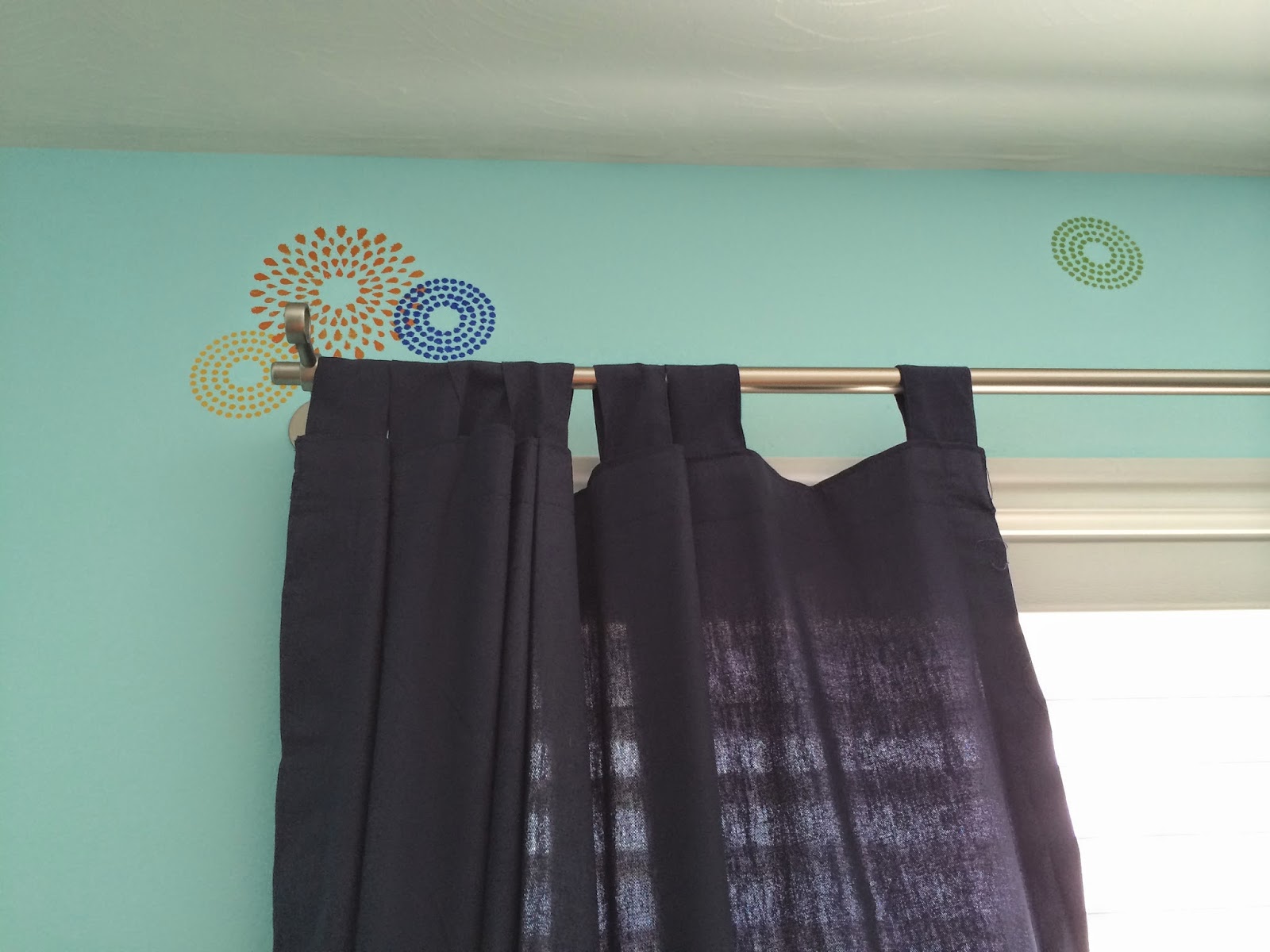 I got them at Bed, Bath, and Beyond and they were a hot deal. Ahem . . . except I hate that they're tab top and the way I have the curtain rod hung they hang below the window moulding. I suppose I could move the curtain rod up, but I didn't wanna.
Instead I went the much easier route (not) of taking the tab tops off and putting grommets in. I like the look better, but that created a new problem. You can't see it in this picture because the bed is stealthily hiding it, but the curtains are not exactly the same length.
Give or take an inch, they ain't right. Truth is, I can't bring myself to care that much.
At least not enough to do anything about it. This is what having kids has done to me. It has sucked some of the OCD twitchiness out of me.
Peanut Head would quickly admit that that's a good thing. 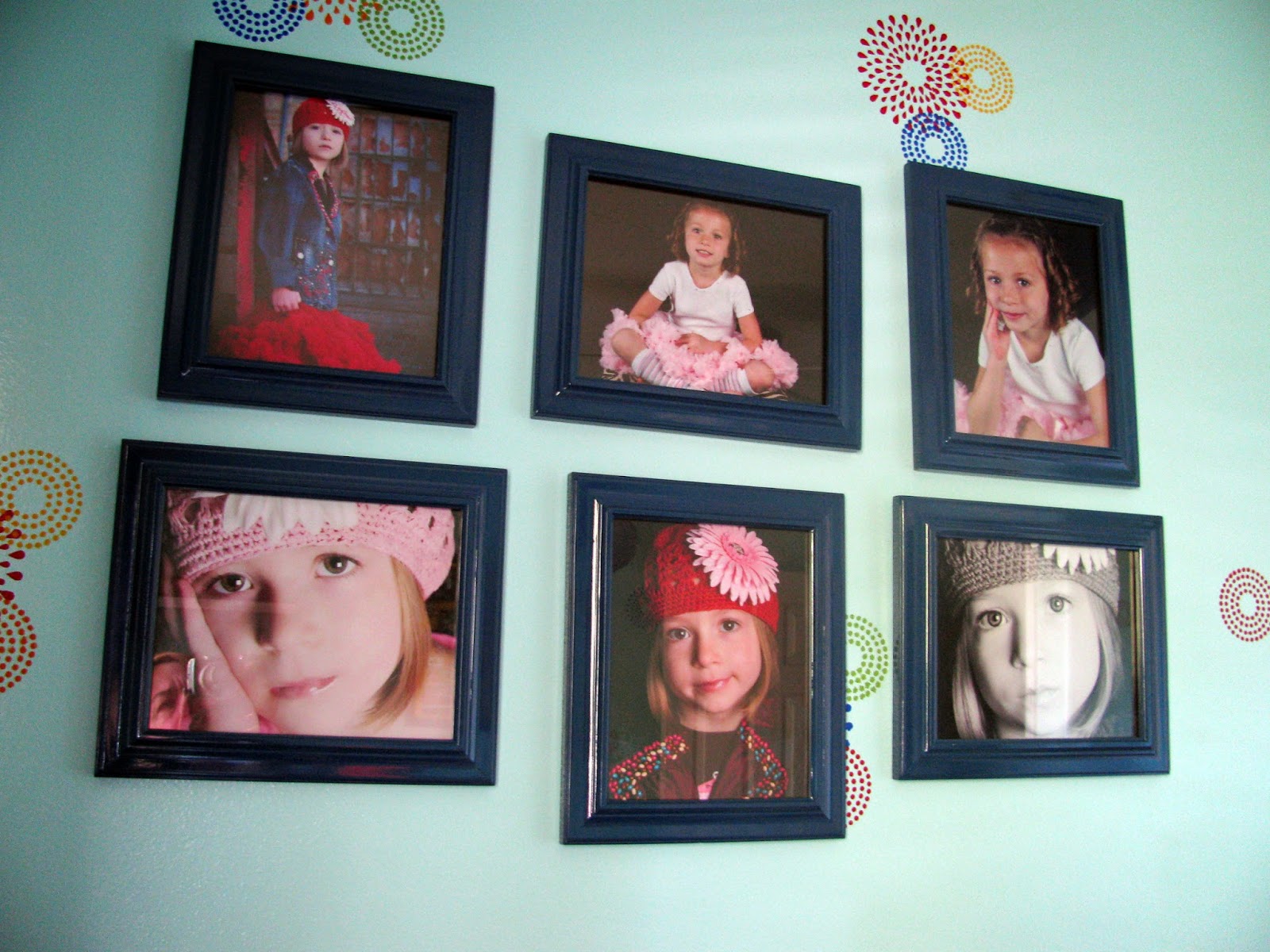 I hung these pictures back up, but first I spray painted the frames blue. They were white before and the white was looking pretty dingy, so they needed some sprucing up. In my mind I was going to paint them red, but Stinkerbell suggested the blue and I kind of like it. Never mind that she hates the pictures. They're five years old and she is not that person anymore.
All the more reason that I shall clutch them to my heart and savor their deliciousness.
Torture her, whatever. 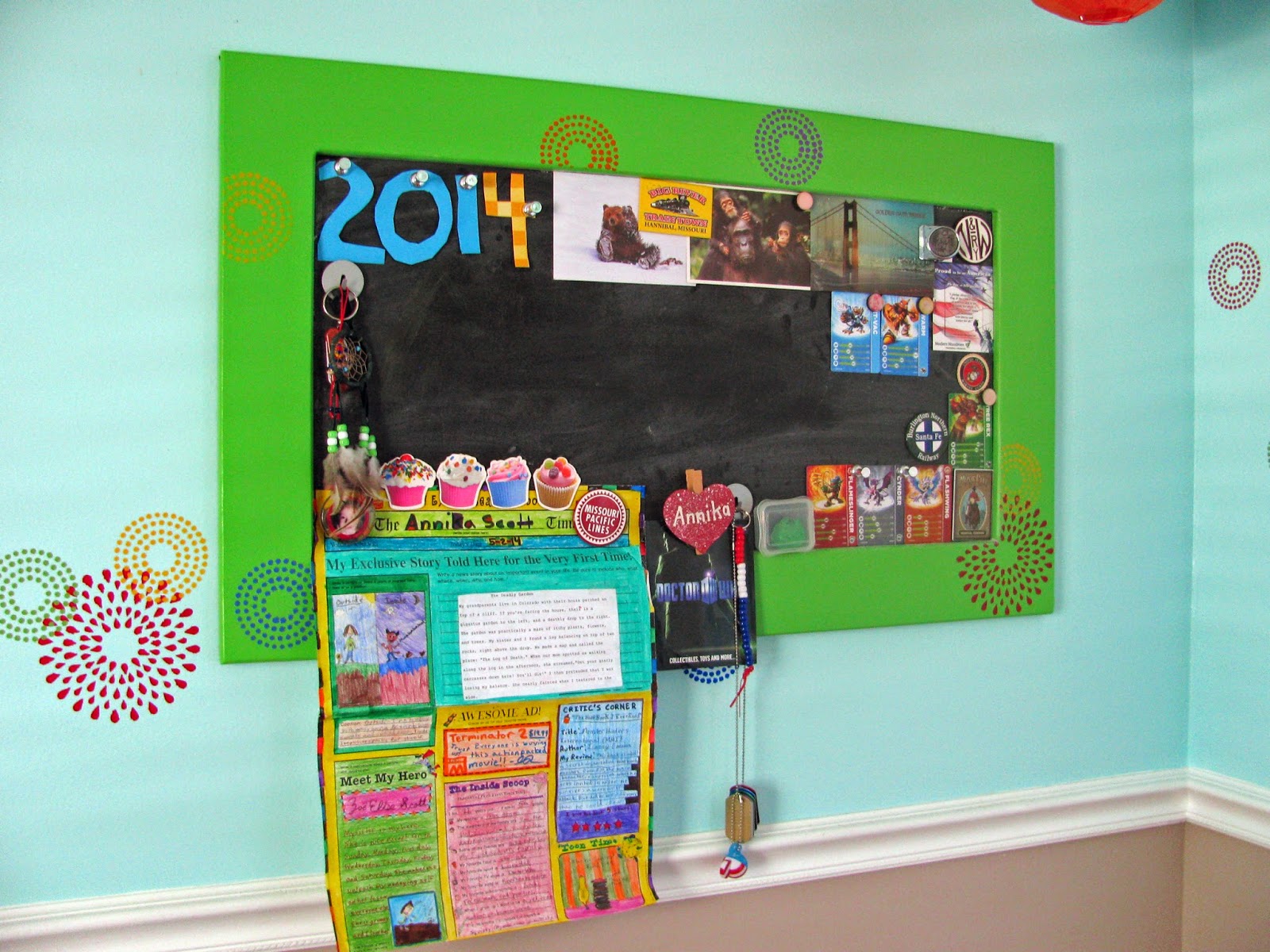 Ta DA! The magnet board that did not take three years to paint. Like Zoe's.
One more reason for her to shower me with her teenagery disdain. 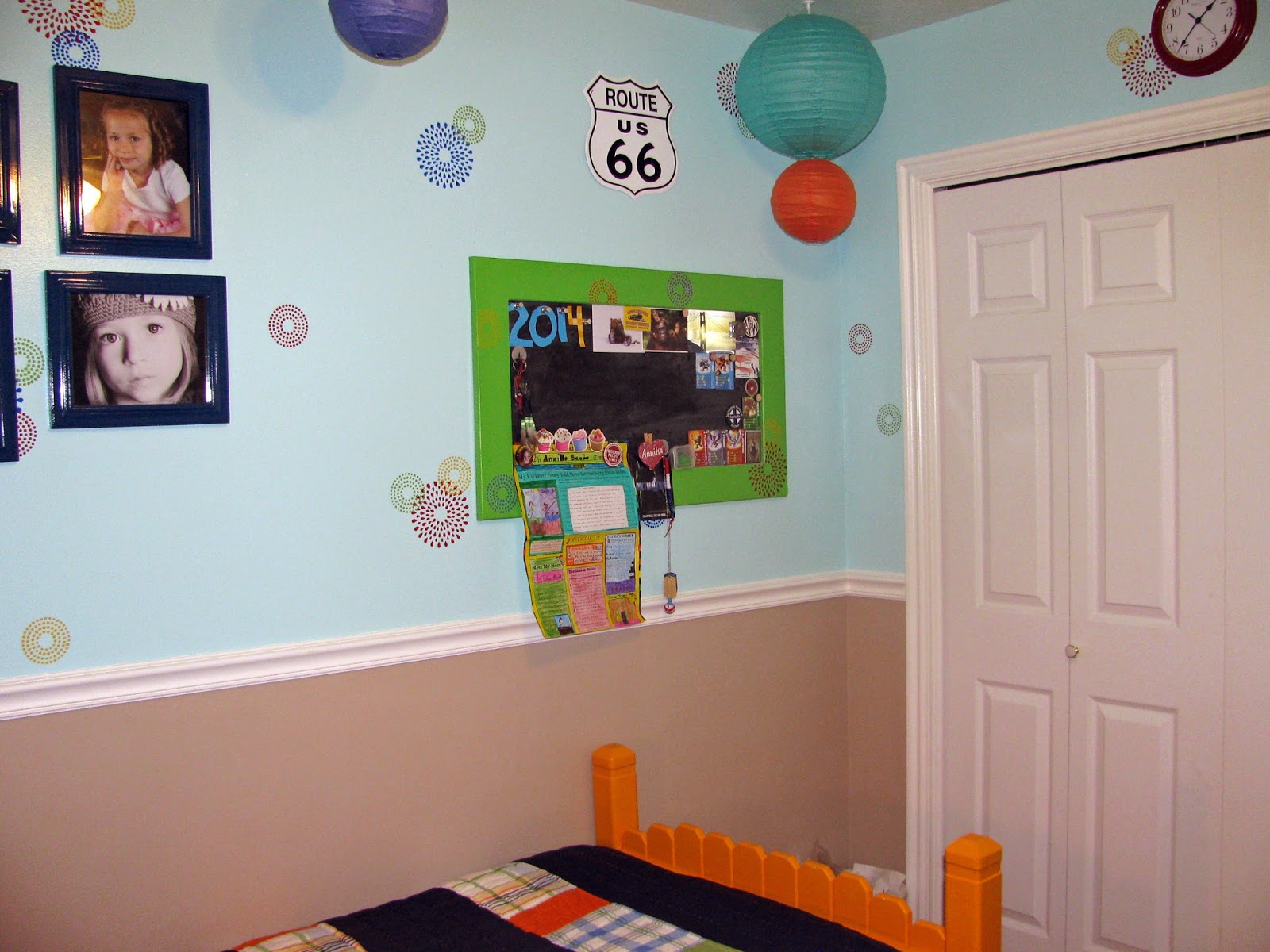 We also hung up some road signs and paper lanterns. Because you can never have too much color in my world. 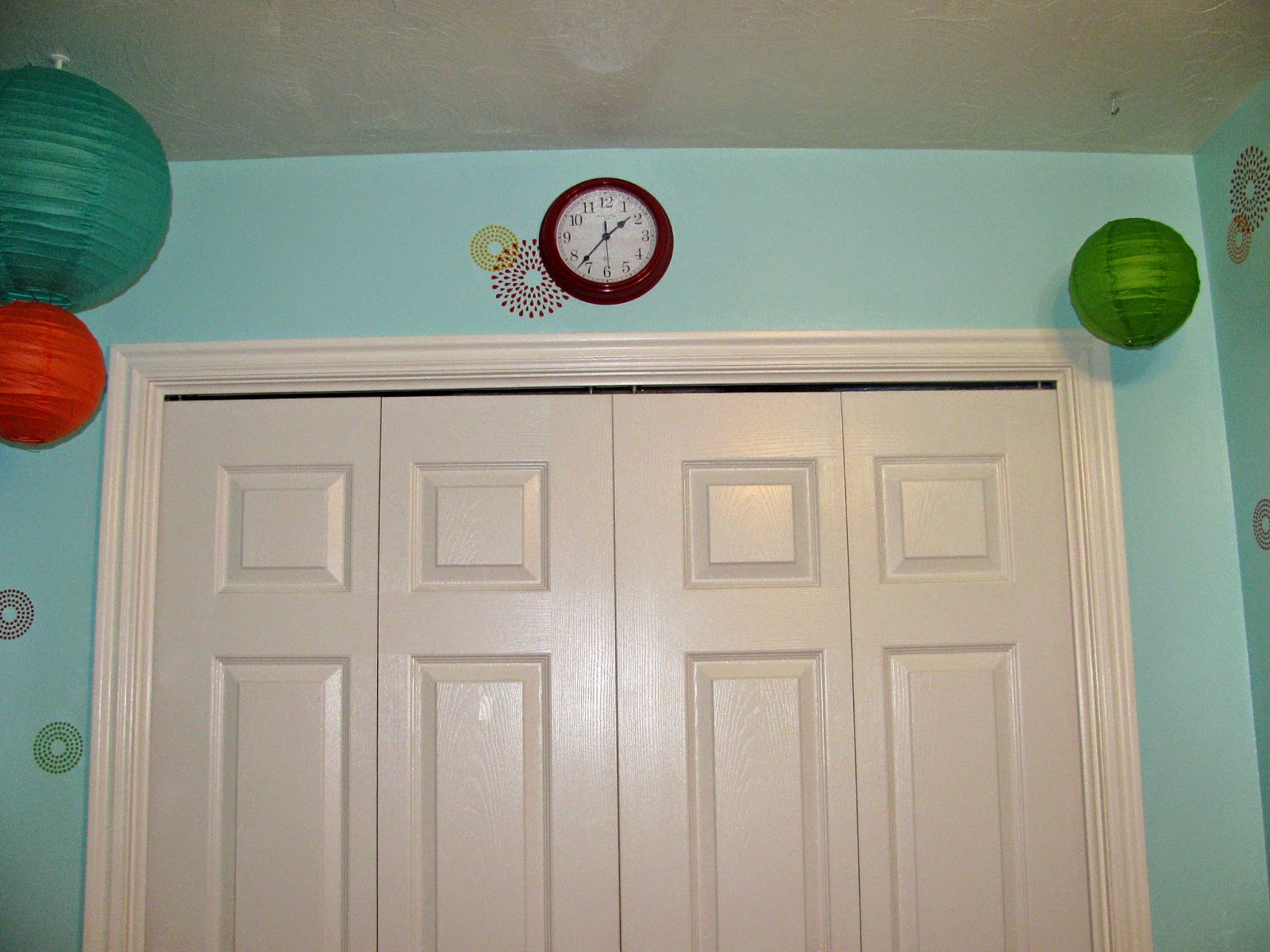 Since I didn't get to paint the frames red, I snagged a red clock. 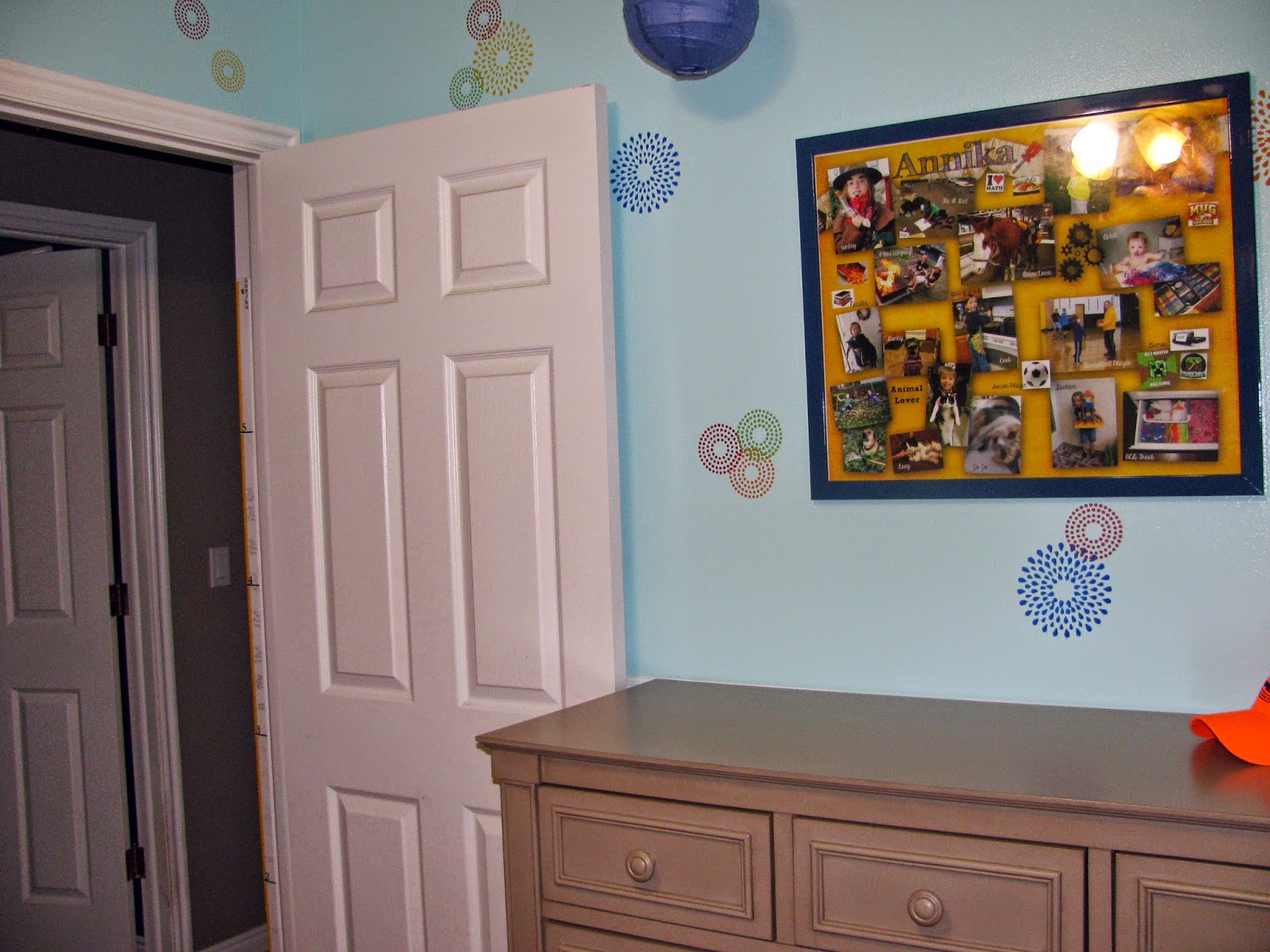 This is the other thing I framed. It's one of those spotlight posters that teachers sometimes ask parents to do for their kids so they can display them at school for a week.
More parent homework. My favorite. 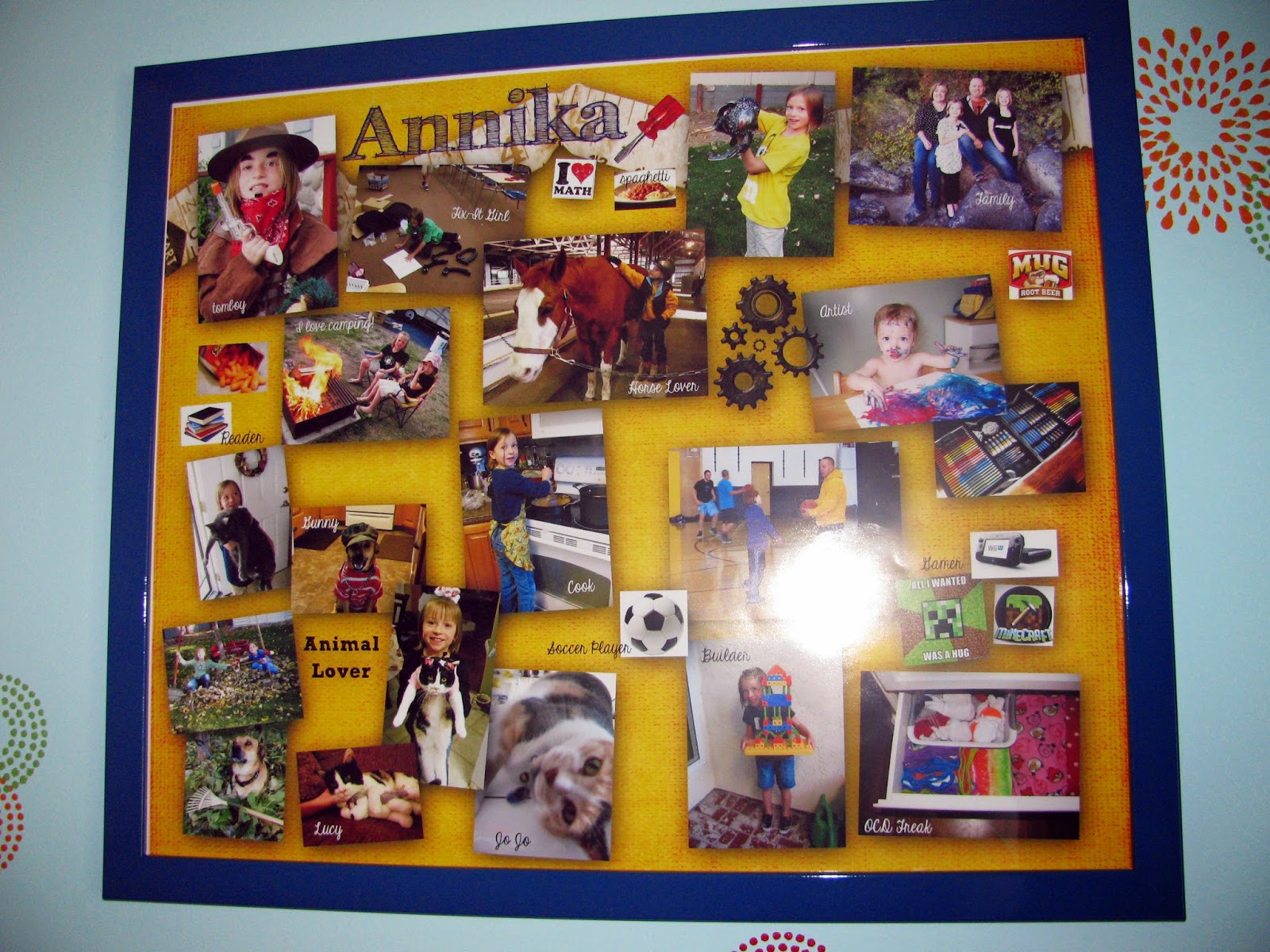 I've done a few of these things and this was the first time I tackled it digitally. That was the way to go, let me tell you. All the pictures are already on my computer. I just dragged (drug?) them onto my Photoshop canvas and went to town. Then I sent the whole thing to Sam's Club to print as a poster. Easiest spotlight poster I've ever made. 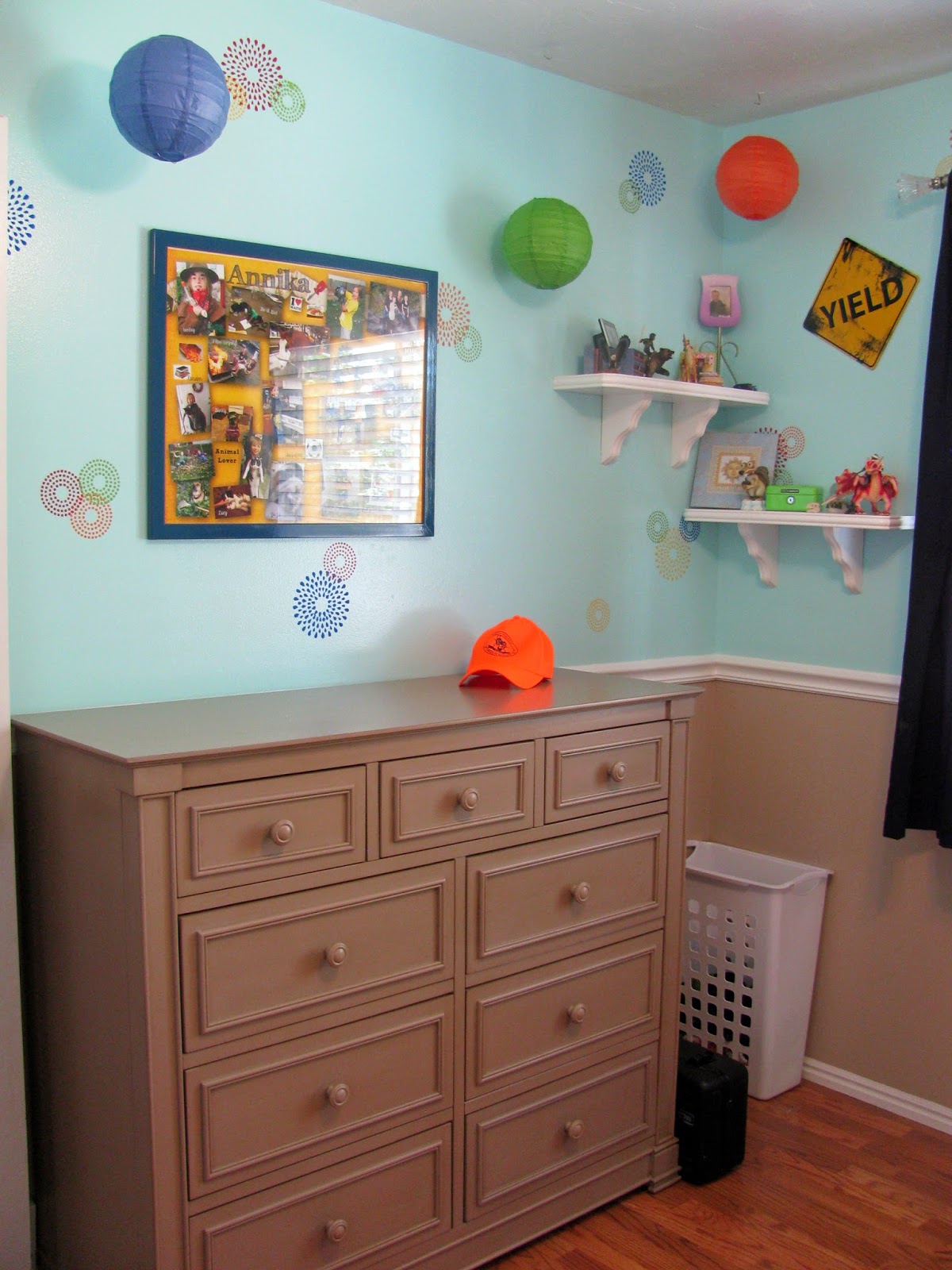 Lastly, I did paint the shelves that were on my list, but they just got a fresh coat of white spray paint. Maybe I should have done blue, but I felt like that would be like painting the trim blue, and the thought of doing that makes me twitchy. 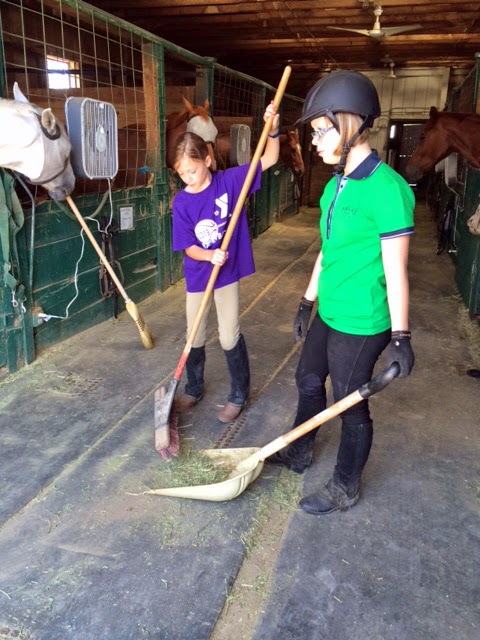 We're having a nice, mostly relaxing summer with a little bit of productivity mixed in. On the days that the girls have horse lessons, they put in a couple hours of barn upkeep. As was pointed out to me when I posted this picture on Facebook, that white horse there looks like he's helping out, doesn't he? 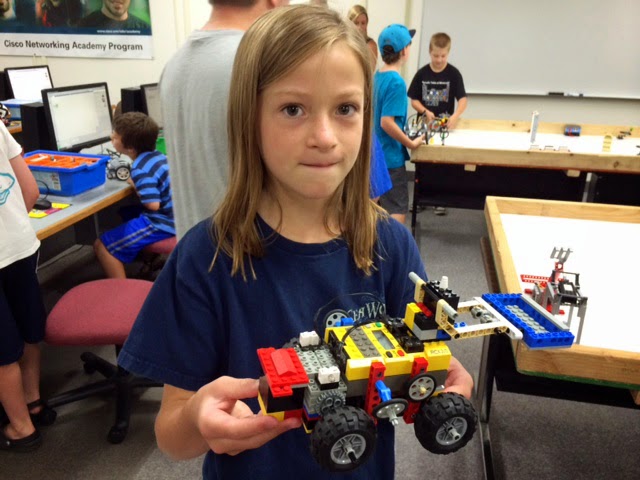 Stinkerbell has been camp crazy this year. She went to Robotics camp for a week of afternoons and she had a lot of fun. She was one of two girls which is pretty typical with her interests.  She's like one of the boys, but not. 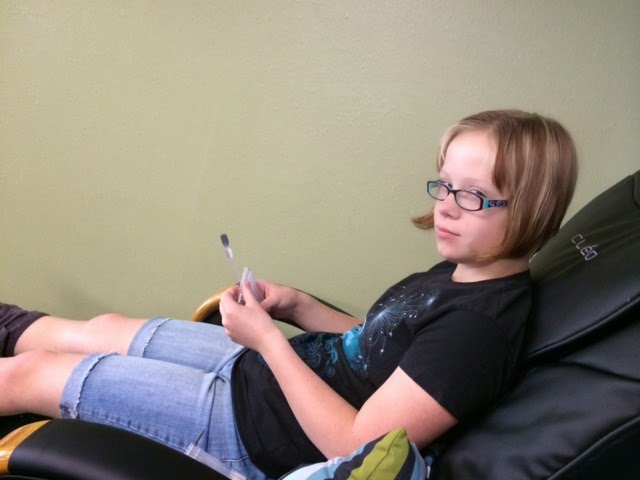 While Stinkerbell was at camp, I took Zoe for Mom/Daughter pedicures. She was not excited.
I thought it would be so fun. We could hang out. We could have pretty toes. We could bond.
You would think I had asked her to wear suspenders or something, she was that into it. 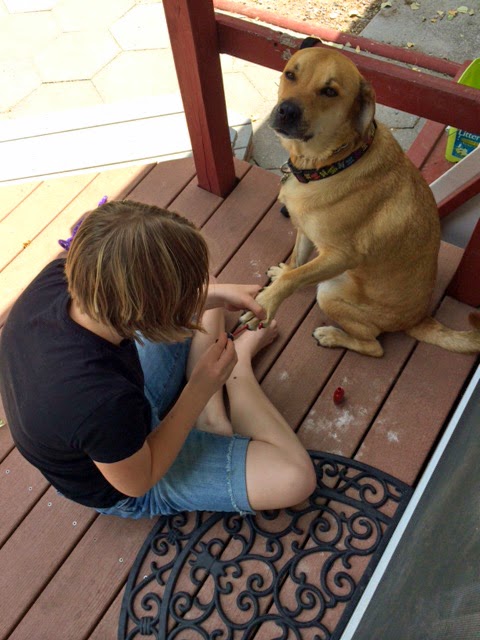 It must have made some kind of impact though, because when we got home Gunny Man got a pedicure. He looks as happy as Zoe Bug, doesn't he? 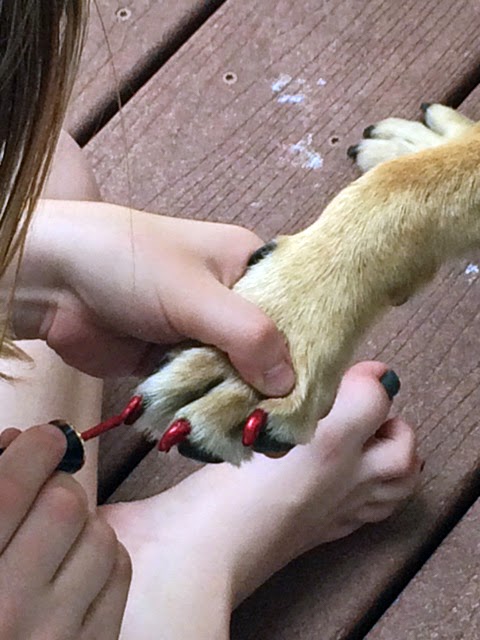 Such pretty, pretty, puppy nails.
He's such a good sport. Even though his look says "Please save me," he would do anything for his girl.
controllingmychaos.com family kid bedrooms
Latest Posts