I was thinking a lot lately that Google is working hard to provide user a great android experience. Google is launching new fixes on monthly basis, launching a new version almost every year with ton of new features. But if we see distribution of android version over the phone market, we will be stunned by statistics. Many android customer have outdated version of android.
Some OEM believes in concept of loading hardware and software once in a lifetime like Micromax, Chinese mobile maker while most OEM only providing update to their premium phones or say flagships.
This approach is killing Google Android. I admit providing software update to existing hardware takes lot of money which OEMs don’t want to do for cheap phones. Only flagship which meant to bind with their reputation is their priority.
Look at current android distribution. Almost 70% percent of market is occupied by Kitkat and lower version of android while Google announced a new android nougat to be launch soon. I presume only some phone with Lollipop have possibility to get update of android nougat. So again the gap will only increase over the time 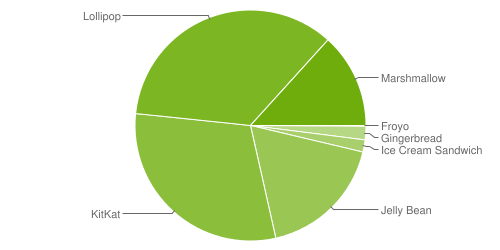 Obliviously android and its user are the one who suffer most by this. Android’s team hard work and latest update are not reaching to millions of users, on the hand people are willing to move but they bound by limitations of their OEM. Eventually android suffers in the whole process

For current market strategies, competition is so high to sell devices for android manufacture that they are not going to pay attention on hardware which can support some level upgrade for new android version. Their only purpose is to sell android phone. So one solution is customer will have to buy new android phone every year.
Second possible solution is OEM should do minimum changes in android source so that they will prepare new upgrade for their existing customers at minimum cost. But this will wipe out the creativity and diversity in android market
Continue…..

LaptrinhX
—
Evolving android, points where Google android sucks because of OEM
Share this